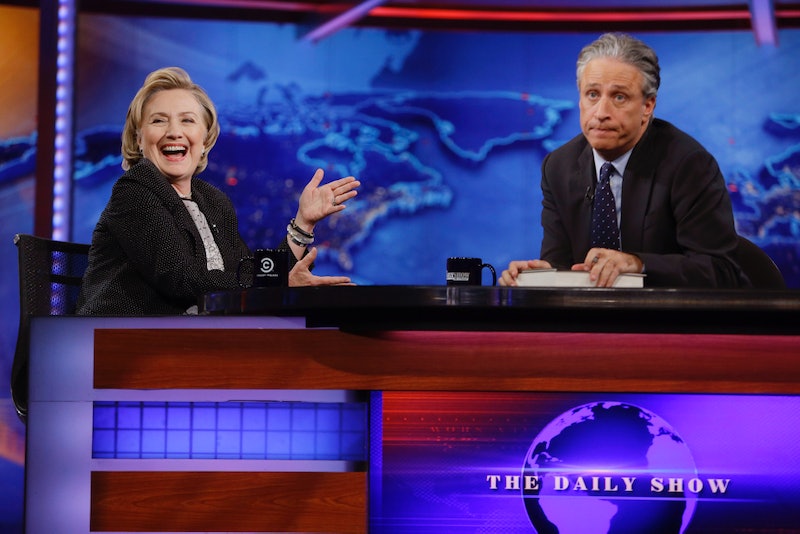 It's hard to imagine a time when television wasn't a part of politics, particularly in races for office. For the last few decades, appearing on talk shows, getting parodied on SNL, and giving interviews with big-name hosts have been staples of any legitimate candidate's political campaign, with everyone from President Obama to Sarah Palin finding themselves exempt from the process. And for those who've been on the campaign trail more than once, such as likely 2016 candidate Hillary Clinton, making the TV rounds is practically as natural as talking foreign policy — if a lot more painful.

Because while some TV appearances consist of little more than shaking hands and flashing smiles, many more contain tough, elaborate Q&As on topics the candidates usually aren't aching to discuss. Clinton, who's about to experience a year and a half's worth of exactly these kinds of interviews, knows a thing or two about what to expect; after all, she's been in the spotlight for decades, with her first television interviews having occurred way back in the early '90s. Looking back at her times on TV, it's interesting to see how well the politician handled the situations — even when she was discussing uncomfortable topics like Monica Lewinsky or her stance on gay marriage, she stayed poised, confident, and knowledgable. Below, seven must-see talk show appearances from Hillary Clinton over the years:

Last July, Clinton appeared on The Daily Show to discuss turmoil on the Gaza Strip, but, as expected, the conversation also turned to some lighter topics. Case in point: Host Jon Stewart's questioning of whether Clinton preferred a home office or commuting to work (she chose home) and an office with corners or without (she chose without — much to the excitement of the audience). It's highly entertaining to watch Clinton navigate Stewart's increasingly intricate questions and try very, very hard not to say that she's running. Even though we totally knew she was.

The Clintons' joint appearance on The Arsenio Hall Show is best remembered as the time then-nominee Bill played saxophone, but his wife, too, had some big moments of her own. She talked about fighting with Bill (only over movies, of course), voiced her support for her husband's candidacy, and, when asked if she was "pulling back" from the spotlight, bluntly stated that it was only "wishful thinking" by the opposition. It's a fascinating interview to revisit all these years later.

Now that Clinton has voiced her support for gay marriage, it's fascinating to watch her sideline the issue during a 2007 interview with Ellen DeGeneres. Although the then-candidate spoke of her belief in civil unions and repealing "Don't Ask, Don't Tell," she acknowledged that she did not support gay marriage, and that all marriage-related issues should be left in the hands of the states.

In a surprise appearance, Clinton came on The Colbert Report to discuss the release of Hard Choices, but, really, to get into a hilarious name-dropping contest with the show's host. No major announcements or policy changes came from the interview, but what makes it so enjoyable is how it acted as a rare display of Clinton's great comedic timing and ability to banter.

There was plenty to take away from Clinton's interview with Robin Roberts on Good Morning America last year, but perhaps the most memorable part was when Roberts mentioned a tweet Sarah Palin had sent accusing Clinton of starting the "war on women." Clinton took the moment to shed light on the sexism present in the '08 race, including how she was asked by the Obama campaign to criticize then-VP candidate Palin.

Clinton also spoke of the "double standard" in American culture in terms of women in authority, and emphasized her commitment to women's issues. An important and feminist interview.

In an in-depth interview Barbara Walters that came at the heels of Whitewater and a failed health care overhaul, Clinton spoke candidly about the controversies she and her husband were facing. She even addressed accusations that she was violent towards Bill, acknowledging her "temper" but denying the worst of the rumors.

Then-Senator Clinton appeared on Letterman's show to promote her autobiography, Living Choices, but thanks to the host's probing, the majority of the conversation consisted of her thoughts on marriage and the Lewinsky scandal. Clinton spoke of the difficulties she faced in the immediate aftermath of the situation, including making the decision of whether or not to divorce. She also hinted at a possible future presidential bid, saying that if she did run, she would work to continue her husband's policies but work to make her own legacy. Now that she's running once more, only time will tell if this promise eventually comes true.