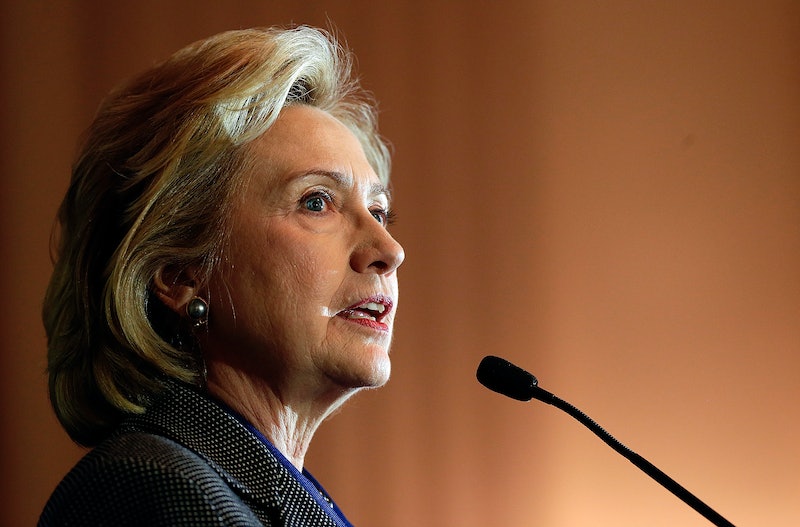 Democrats and Republicans, and Green Partiers and Libertarians alike, are buzzing about the launch of Hillary Clinton’s 2016 presidential campaign. The Democratic candidate frontrunner announced her plans to run on Sunday, which will set into motion one of the most historic campaigns ever.

Clinton’s candidacy announcement has been a highly anticipated event — in other words, we've been waiting, Hill. On Friday, Clinton fed right into that excitement by releasing a new epilogue of Hard Choices , her 2014 memoir, in which the former Secretary of State intimates that her political career is far from over. “There [is] so much more work to do,” Clinton writes in what many people assumed to be a veiled hint at her bid for the Presidency.

Clinton is no stranger to expressing her visions, beliefs, and plans via the written word: in addition to Hard Choices , she’s written five books, including her 2003 memoir Living History; 2000’s An Invitation to the White House; 1998’s Dear Socks, Dear Buddy; 1997's The Unique Voice of Hillary Rodham Clinton; and 1996’s It Takes a Village. (On the off chance you haven't realized this already: Hillary Rodham Clinton is one accomplished woman.)

Here's a compilation of 13 inspiring, incisive, insightful quotes from Clinton's six books that prove just how ready she is to be our first female POTUS.

1. “One thing we know for sure is that change is certain. Progress is not. Progress depends on the choices we make today for tomorrow and on whether we meet our challenges and protect our values.”

2. "A political life, I've often said, is a continuing education in human nature, including one's own. My involvement on the ground floor of two presidential campaigns and my duties as First Lady took me to every state in our union and to seventy-eight nations. In each place, I met someone or saw something that caused me to open my mind and my heart and deepen my understanding of the universal concerns that most of humanity shares."

3. "Listening to what people in other countries are saying and trying to understand how they perceive their place in the world is essential to a future of peace and security at home and abroad."

4. “We need to understand that there is no formula for how women should lead their lives. that is why we must respect the choices that each woman makes for herself and her family. Every woman deserves the chance to realize her God-given potential.”

—It Takes a Village: And Other Lessons Children Teach Us

5. "Take criticism seriously, but not personally. If there is truth or merit in the criticism, try to learn from it. Otherwise, let it roll right off you."

6. On Obama: “We had very different personal stories and experiences, but we shared the old-fashioned idea that public service is a noble endeavor, and we believed deeply in the basic bargain at the heart of the American Dream: No matter who you are or where you come from, if you work hard and play by the rules, you should have the opportunity to build a good life for yourself and your family.”

7. “Do all the good you can, at all the times you can, to all the people you can, as long as ever you can.”

8. "The harder they hit, the more encouraged I get."

9. “Diplomacy would be easy if we had to talk only to our friends. That’s not how peace is made.”

10. "In our culture, saying you made a mistake is often taken as weakness when in fact it can be a sign of strength and growth for people and nations.”

11. “In this world and the world of tomorrow, we must go forward together or not at all.”

12. “All of us face hard choices in our lives. Some face more than their share. We have to decide how to balance the demands of work and family. Caring for a sick child or an aging parent. Figuring out how to pay for college. Finding a good job, and what to do if you lose it. Whether to get married — or stay married. How to give our kids the opportunities they dream about and deserve. Life is about making such choices. Our choices and how we handle them shape the people we become. For leaders and nations, they can mean the difference between war and peace, poverty and prosperity.”

13. “One thing that has never been a hard choice for me is serving our country. It has been the greatest honor of my life.”

More like this
16 Novels That Paint A Realistic Portrait Of Abortion
By K.W. Colyard
Annie Lord’s Memoir Will Make You Believe In Love Again
By Shahed Ezaydi
5 Gripping Books To Read From Women’s Prize For Fiction Winner Ruth Ozeki
By El Hunt
25 Spell Books For Every Type Of Witch
By K.W. Colyard
Get Even More From Bustle — Sign Up For The Newsletter