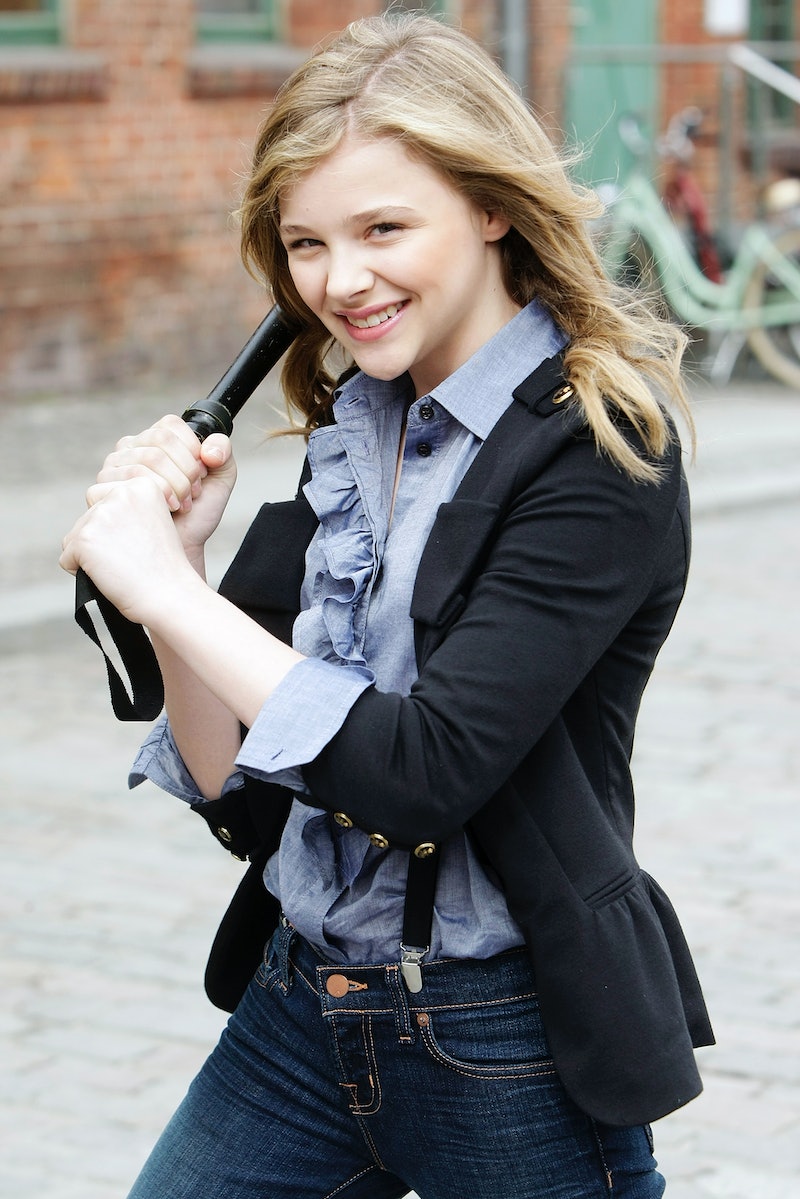 Five years ago, a tiny blonde girl with a purple bob wig and a foul mouth burst onto our screens as Mindy McCready, also known as "Hit Girl," in Kick-Ass. That film got a sequel two years ago, but why didn't Chloë Moretz get a Hit-Girl spinoff movie? Say what you will about Aaron Taylor-Johnson, but we all know who the real breakout of Kick-Ass was without a doubt. The actress has said recently that she's done with the character and a Kick-Ass 3 is unlikely happen. However, that doesn't mean we can't mourn for what we might have had.

If you haven't seen Kick-Ass since April 2010, Mindy McCready is a homeschooled girl who was trained as an assassin by her single dad played by Nicholas Cage. He taught her how to fight and raised her to have an encyclopedic knowledge of and love for weapons. He also drew comics for her to explain their revenge mission. The two of them tasked themselves with avenging the murder of Mindy's mother and the ruination of Damon McCready's character and career. Underneath the shock value of a girl in pig-tails who cursed worse than a sailor and had no problem taking lives was a really interesting character that deserves a film of her own.

Am I right, ladies? The X-Men franchise has solo films for Wolverine, with Deadpool and Gambit coming up in the next couple of years — but what about Storm? The Marvel Cinematic Universe is finally giving us a Captain Marvel standalone film but that's not until 2018 and the franchise will be in Phase Three by then.

If you look at comic books, and television for that matter, you'll see that female superheroes have been on the rise. It's time that Hollywood caught up. A Hit Girl move would be a fun addition. Boys aren't the only ones who can and want to defend us in the name of justice or revenge, or whatever!

No Need To Bother With Exposition

We already know Hit-Girl's origin story and it was dark, weird, and hilarious. A spin-off could jump right in with Mindy's adventures off on her own without needing to spend a lot of time on history.

She's Only Gotten Cooler With Age

The actress owned Alec Baldwin on 30 Rock and proved that she could carry (no pun intended) her own film in the new adaptation of Stephen King's Carrie and last summer's indie romance If I Stay. Chloë Grace Moretz has had quite the career, and Hit-Girl was the role that started it all.

Piggybacking off of that thought, Chloë Moretz is now able to reach girls her own age in this action role. As a college student seeing Kick-Ass for the first time, I didn't exactly relate to a middle school-aged girl. Which is fine, but the film is rated R, so audiences closer to Hit Girl's age were less likely to see her. However, now that the actress is 18, see can be more accessible in terms of representation in media.

There is already a Hit Girl comic book that takes place between each Kick-Ass volume. The story is there already, and it's a shame that it may never make it to the big screen.