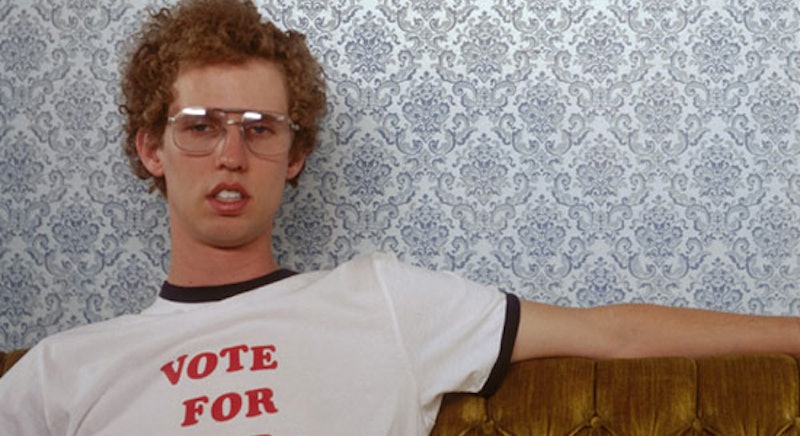 There’s a secret that almost everybody is in on, and it’s that nerds make the best everything: partners, hookups, and spouses. I had a friend who said that she only went after guys who were geeky enough to make her hot. She couldn't get enough of the overly intellectual, socially awkward, and openly nerdy men. It's true — nerds are sexy. Really, who doesn’t love a good nerd especially when there are ex-model nerds like Matthew Gray Gruber (well, he’s nerdy on Criminal Minds,) social media nerds like Mark Zuckerberg, computer billionaire nerds like Bill Gates, Science genius nerds like Neil De Grasse Tyson, T.V. personality nerds like Chris Hardwick, and super-cool female nerds like Felicia Day.

Is there anything sexier than someone who isn’t afraid to embrace their dorky self? It’s the reason why The Big Bang Theory kills it in the ratings. We all want to know more about the weird and wonderful world of nerds.

It used to be that women overlooked the nerds for the obviously gorgeous players, but now they know that underneath the bookish, normcore exteriors lurks the much desired nerd-hottie. They might play a little too much Minecraft, and prefer a chocolate shake to a Frappuccino, but they'll always work harder to make sure that you're happy.

Nerds are known for having high IQs, and it's generally agreed that the brain is the most important sexual organ, making them a smarty who'll do what it takes to satisfy you sexually. They won't even mind doing a little research to keep things exciting.

2. Nerds are very good with their hands.

Nerds play a lot of video games, type on computers, and use any kind of handheld devices as if they were wizards. Their dexterity is off the charts, and that means they won't be fumbling around, not knowing what to do when it comes to pushing all the right buttons for you.

You won't need to spend hours at the genius bar to get your computer fixed, you can catch up on Netflix while your nerd works on your problem. Bonus, they probably enjoy it.

4. You'll have to get used to winning every trivia contest.

Nerds know everything, and they aren't afraid to show it. You can understand why they know so much about computer science or quantum physics, but how do they know every cast member in every edition of the Real Housewives?

5. You'll know the difference between the Marvel Universe and the DC Universe.

When you're involved with a nerd, you'll not only know when the trailer for the next Avengers movie comes out, you'll have seen every episode of Agents of S.H.I.E.L.D, Agent Carter, Daredevil, and all the separate Avengers movies featuring Thor, Captain America, The Hulk, Iron Man, and you'll know what the deal is with Spiderman. Oh, and you'll never, ever expect to see Superman in any Marvel movie.

6. A nerd may be good at playing games, but they're no player.

Nerds don't cheat. When you're dating a nerd, you can be as secure in your relationship as a secure server because your nerd appreciates what a great thing they've got going with you, and they really appreciates when you're nerd-punny.

7. Nerds don't shock easily, so you can show them your freak side.

Most nerds have been to Comic Con at least once, so they've pretty much seen it all, and had their picture taken with someone dressed as Groot. Nerds don't judge.

Those nerds you ignored in high school all grew up to invent things like Twitter, Microsoft, and Facebook. It may not be immediately obvious, but nerds are hot underneath their awkward exterior and they're smart, romantic, passionate people who will introduce you to new thing and never forget your birthday or anniversary. Once you go nerd, you'll never go back.