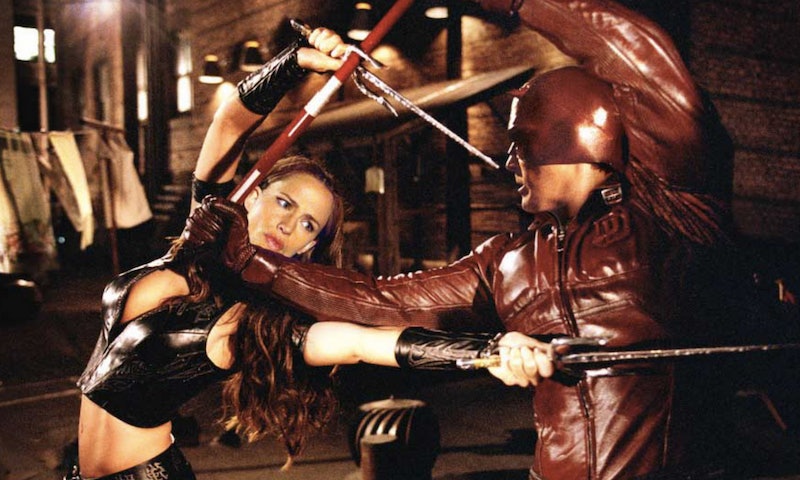 More than likely, you started your Marvel's Daredevil marathon with a little bit of knowledge about the character, if only because of Ben Affleck's outing as Matt Murdock in 2003. We're not here to talk about that, though, but there's one thing from that movie that you might be waiting for while getting through the entire series in a day: Where is Elektra in Netflix's Daredevil? In 2003's Daredevil she was played by Jennifer Garner (who is now married to Affleck, because comic movie love is REAL, you guys), and then got her own stand-alone movie in 2005. So when is she going to show up in the series' Hell's Kitchen?

Well, don't hold your breath during your 13-episode binge. This probably isn't a spoiler alert — because, you know, it doesn't happen — but we don't see Elektra show up in Daredevil Season 1. And you know what? That's perfectly fine.

Don't get me wrong, I am all about ladies kickin' butt and fightin' crime, but maybe it's for the best that she doesn't show up right away. Elektra is in fact a major love interest for Matt, but she's also a ruthless killer, out for revenge against just about everyone; she's totally tormented inside, etc. She's been dealt crazy life twists and turns, and that's made her into the strong female she is today, but she's got a really dark side. Because of that, her relationship with Matt is always touch and go, and a lot of times they're simply trying to kill the other. It's heavy stuff.

She's still a beloved character, and I think she's pretty great (all that murder aside) but she's so intense, having her show up in Season 1 might have been a little too much for us to handle. Daredevil certainly hits the ground running with Episode 1, but it still has to establish the Daredevil world. I'm perfectly fine with her not showing up, so we can really see what Matt's trying to do with his life, and what he's trying to do with Daredevil. If Elektra were introduced right off the bat, it might muddle things up a bit. Also, you know, she might try to kill him right away and that's no good.

But, she is alluded to at the very least. Daredevil is chock full of amazing little Marvel references without blatantly making Marvel references. There is in fact one semi-HUGE Elektra shoutout towards the end of the season, but I really don't want to spoil it for everyone if you're not that far along yet (I understand that some people have lives that involve leaving the house and NOT binging 13-episodes of television in one sitting). It's also a little bit hard to pick up on if you're not on top of Elektra's backstory, so just know that in the comics she's Greek. So, you know, keep an ear out for a line about a Greek girl. You'll know it when you hear it.

Having Elektra show up for Daredevil Season 2 is already an idea showrunner Steven DeKnight is thinking about. He talked to SciFiNow and mentioned that "there are so many more stories to tell, The Hand, Elektra, Bullseye... with a 13-episode arc you don't have to rush it; you can explore. That's not to say we are going to do Bullseye and Elektra, but it's on the radar." And now that's an idea on our our radar, too.