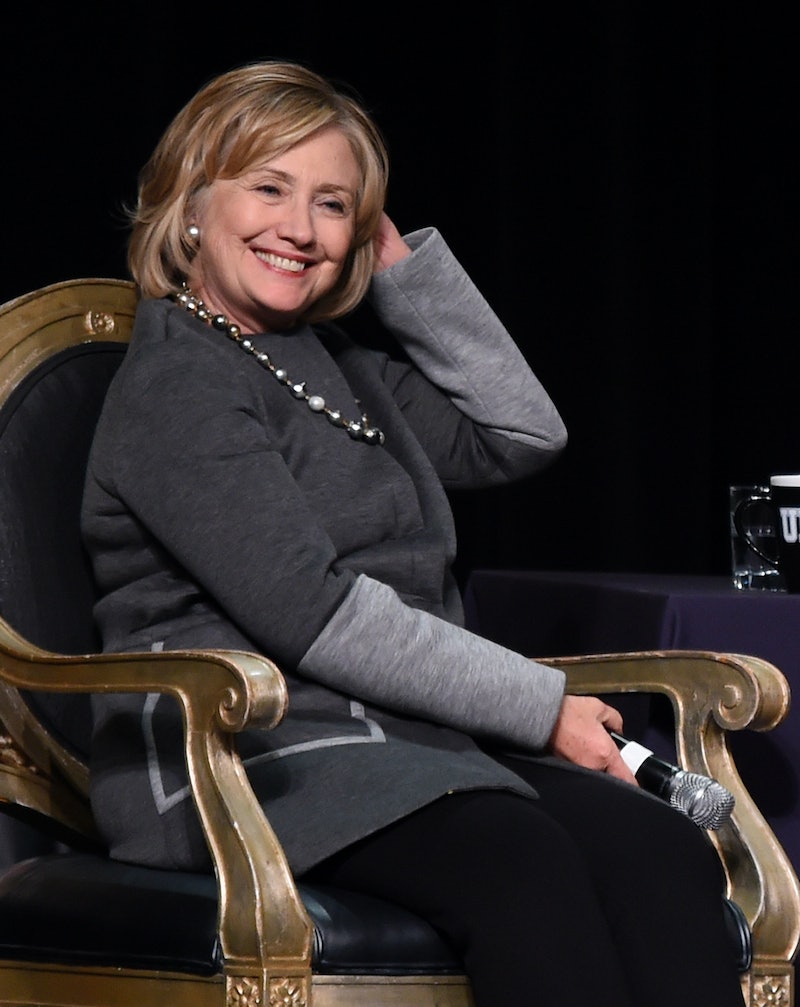 It would be a complete impossibility for a political candidate to ever meet an entire nation's idea of a good time. Democratic or Republican, old vs. young, politics and controversy go hand in hand. When discussing Hillary Clinton's presidential candidacy for 2016, then, there will be fans, and there will be haters. Just as there have and always will be fans and haters of Hillary herself. But whether or not you respect her policies, there's no denying that the former Secretary of State has made irrevocable strides for feminism — for women in and outside of politics.

Whichever side (or lack thereof) of the spectrum of political affiliation you fall on, it cannot be denied that Hillary is going where no American woman has (or more realistically, has been able to) gone before. A female American president would signal change — unchartered but fantastically necessary change.

No matter how questionable of controversial you might deem H.R.C., the reality is that what she's doing is important. Not unlike President Barack Obama's 2008 election, Hillary's election would signal victory for a group previously (and very often still) stigmatized and oppressed. And there's no telling what brilliant things would come of that.

At times such as these, it's vital to consider our personal relationship to candidates — to assess what we feel their strengths and weaknesses are; to address what aspects of their views and personas we identify with. When it comes to me, I cannot help but admire Hillary's relationship with body positivity and feminism. Her ability to shut down the haters when they troll on her appearance is nothing short of remarkable, especially for someone facing such constant, public scrutiny. Here are just seven times she nailed it — seven times she made observations on our aesthetics-obsessed society in truly flawless fashion.

1. "If I want to knock a story off the front page, I just change my hairstyle."

Because, you know, we value appearances just about over anything else.

2. "We should remember that just as a positive outlook on life can promote good health, so can everyday acts of kindness."

In true body pos mode, Hillary acknowledges that there is more to health than numbers and measurements. Health — be it psychological, emotional or physical — can oftentimes be bred by a change of heart.

3. "You may not agree with a woman, but to criticize her appearance — as opposed to her ideas or actions — isn't doing anyone any favors, least of all you."

This! This is so incredibly necessary. There is a time and a place to discuss fashion and beauty. But that time and place is not in the midst of a political discussion. And discussing fashion or beauty should never eclipse discussing a woman's merits, achievements or thoughts outside those industries.

4. "Insulting a woman's looks when they have nothing to do with the issue at hand implies a lack of comprehension on your part, an inability to engage in high-level thinking."

A mantra when it comes to Internet haters is often, "Don't feed the trolls," but if you're going to feed them, there is, perhaps, no better response than this.

5. "I'm going to be pitching Andy [Cohen] on a new show for Bravo. We can call it 'Project Pantsuit.'"

Ok, so maybe this one isn't body positive per se, but then again: Part of body positivity is upholding the belief that everyone is entitled to represent themselves however they so wish, via fashion included. Hillary has been criticized more than once for her love of pantsuits over frilly frocks, but her ability to embrace her style and even make jokes about it certainly speaks body positive to me.

6. "Take criticism seriously, but not personally. If there is truth or merit in the criticism, try to learn from it. Otherwise, let it roll right off you."

There is value to constructive criticism, sure. But if there's one thing out life on the web has done, it's open the door to plenty of un-constructive criticism. It can be difficult to ignore the haters — whether they're trolling on your appearance or otherwise — but most of the time, they're not worth a second of your time.

7. "I do make some people uncomfortable, which I'm well aware of, but that's just part of coming to grips with what I believe is still one of the most important pieces of unfinished business in human history: Empowering women to be able to stand up for themselves."

These words can be applied to just about anything, body positivity included. There is beauty to making people uncomfortable. Just as society is unaccustomed, and therefore shocked, by seeing plus-size women in crop tops or bikinis, so too is the world still shocked by seeing women rise to power. Not everyone will love Hillary, just as not everyone will love that plus-size people are reclaiming the word "fat" as they strap on their fatkinis. But that discomfort of others very often goes to show that what you're doing matters.

More like this
Instagram & Facebook May Finally Lift Their Notorious Nudity Ban
By Allie Fasanella
Selena Gomez Dismissed Trolls' Comments About Her Body After The Golden Globes
By Stephanie Topacio Long
Phoebe Dynevor Serves ‘Bridgerton’ Underboob In Stunning Floral Gown
By El Hunt
Watch Jacinda Arden’s Devastatingly Honest Resignation Speech
By Sam Ramsden
Get Even More From Bustle — Sign Up For The Newsletter
From hair trends to relationship advice, our daily newsletter has everything you need to sound like a person who’s on TikTok, even if you aren’t.