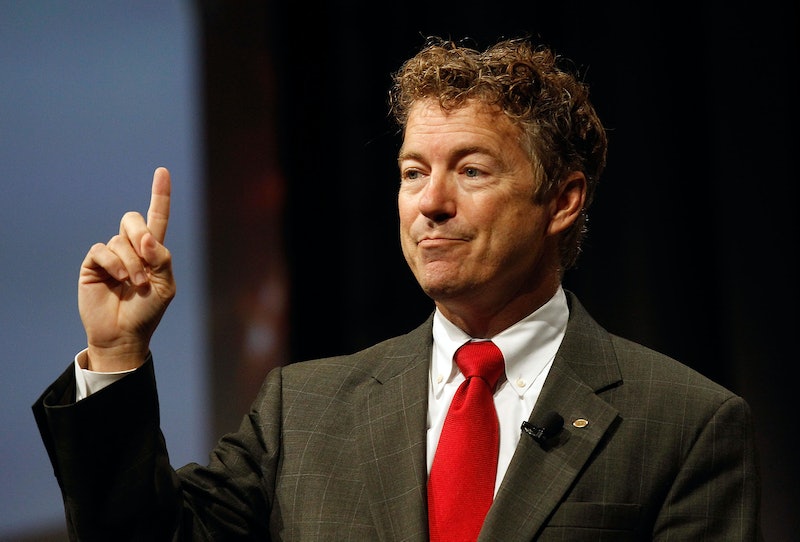 According to Rand Paul, there’s one thing about Hillary Clinton that certainly wouldn’t stop him in the 2016 presidential elections: her gender. In an interview aired Sunday on CNN’s “State of the Union,” Paul said that, if he encounters Clinton on the 2016 campaign trail, he’d treat her “with the same respect that I would treat a man.” Paul then continued to tell the show’s host Dana Bash that the notion that Clinton “deserves not to be treated as aggressively because she’s only a woman” would be “sexist.”

While Paul might have thought he was being progressive and open-minded by making that point, the fact that he thought it necessary to say he would not treat Clinton differently because of her gender actually alludes to the contrary. Clinton has proven time and time again to be completely capable in the political sphere — just as countless women have — and gender should be an afterthought to that capability, if a thought at all.

In fact, Paul shouldn’t treat Clinton with the respect with which he would treat a man. He should simply treat her with respect, period. Throughout her career and throughout her presidential campaigning thus far, Clinton hasn’t asked to be treated differently, or less aggressively because of her gender. That notion is one that Paul came up with on his own, and his mentioning of it seems to show he still holds — at least somewhere in the back of his mind — a stereotypical image of the delicate, sensitive woman who cannot handle entering a “man’s” world.

To be fair, Paul is far from the only one who has discussed Clinton’s gender in such a problematic way. As The New Republic pointed out, an oversimplified binary has already inserted itself into the Clinton campaign: Will she win because she’s a woman, or will she lose because of sexism and gender inequality? When Clinton ran in 2008, the media talked about Clinton's wardrobe and appearance, and used gender-specific words to describe the female candidate. Even in this election cycle, Clinton has often been called a “mother” and “grandmother.” As ThinkProgress points out, men are rarely described as fathers or grandfathers.

But although Clinton’s potential presidency would undeniably be partially about her gender — just as Obama’s presidency has been somewhat about him being the first African-American man in office — that should not be a central point of discussion amongst presidential candidates. Paul certainly would not have dared to clarify that he would not treat Obama differently because of the color of his skin, and he should have used the same discretion when talking about his treatment of Clinton because of her gender.

The presidential election isn’t about skin color or gender; it’s about a candidate’s capability to effectively lead the country. And so far, Clinton has definitely showed she has that potential.

More like this
Beyoncé & Madonna’s “Break My Soul” Remix Honors A Group Of Black Icons
By Stephanie Topacio Long
Christina Aguilera Took A Powerful Stand At Brighton Pride
By Sam Ramsden
Are John Legend & Kanye West Still Friends? The Singer’s Latest Update Is Candid
By Brad Witter
Courteney Cox Doesn't Remember Filming 'Friends'
By Jordyn Tilchen and Sam Ramsden
Get Even More From Bustle — Sign Up For The Newsletter