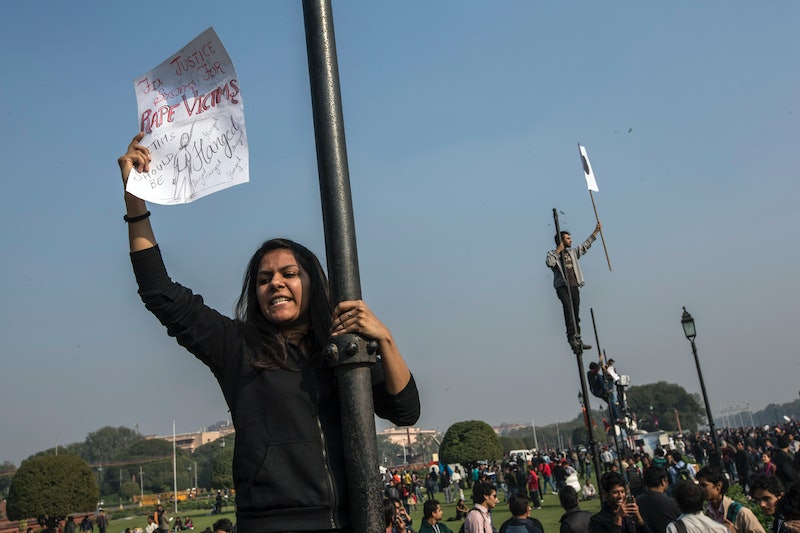 This is devastating: On Thursday, a girl believed to be 13 years old died in a hospital in Uttar Pradesh, a northwestern Indian state, after allegedly being gang-raped and set on fire by three men two days ago. The eighth-grader had been returning from a farm with her older sister when the assailants appeared. After they raped the girl, she and her sister threatened to turn the men in. In response, the three men apparently set the younger girl on fire. More than 80 percent of her body was covered in burns when she arrived at the hospital. The girl's older sister had run back to the village to alert people.

Although police are looking for the suspects, her parents never filed a report with them. And the police aren't exactly impartial, as their account of the incident is like this: the girl was in a relationship with one of the men, a "local goon" named Ram Bahadur, had gone to meet him and, when spotted by his brother, committed suicide out of despair. However, local police are currently, and we quote, "raiding at different locations" to try to find the attackers.

The attack is far from an isolated incident: Earlier this week, a seven-year-old was kidnapped and raped at gunpoint in a sugarcane field. And last week, a 22-year-old tech professional was abducted and raped by two taxi drivers in Hyderabad. Although they threatened to hurt her and her family if she told anyone, the assailants were arrested by police.

But the chance at justice looks slim for the teenage girl, as it does for a string of other women who have also been allegedly raped in the rural state of Uttar Pradesh, where violence between Hindus and Muslims spiraled into riots at the beginning of September. After the riots died down, six women filed allegations of gang-rape — yet police are apparently yet to question anyone. A female higher-up took charge of the cases Oct. 16, and noted that it was difficult to track down the women, as they've scattered to refugee camps, plus eye-witnesses are similarly dispersed. Her first attempt was Oct. 19, and she has said she'll return to the camps for another try later this week.

The difficulty could come with the territory: In Uttar Pratesh, where villages are controlled by unelected male councils, to file a rape complaint is rare. Rape is considered shameful — not only for the woman, but for the family, which might explain why the teenager's family didn't report the rape to the police.

India has become notorious for its high incidence of sexual assault, particularly since the high-profile rape and murder of a student on a New Delhi bus last December, though women in India have been dealing with the country's problem with sexual assault for a lot longer. Of more than 600 reported rapes in New Delhi last year, only one led to a conviction.