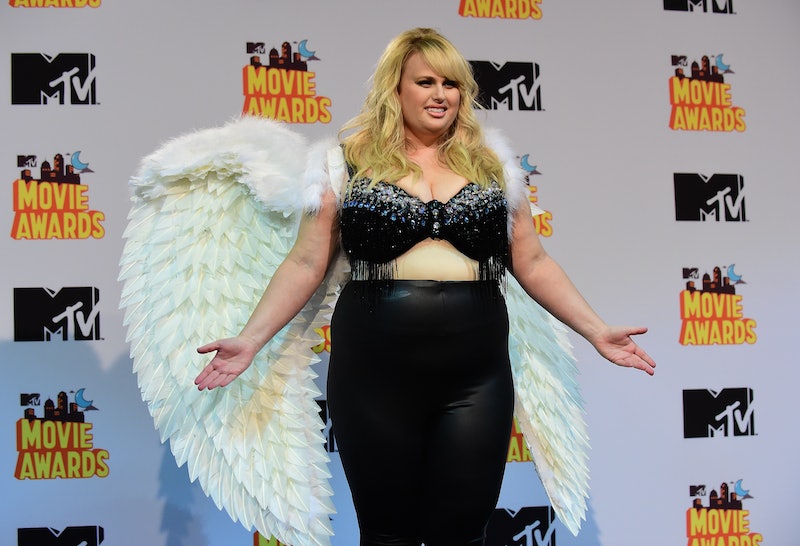 She's a superhero on the red carpet and a badass angel on stage. Rebel Wilson wore leggings with the word "THINK" written across the backside and she happily showed it off at the 2015 MTV Movie Awards. Of course, this was Wilson's second outfit of the show after practically slaying the carpet earlier that afternoon in a cape dress inspired by girl power. Could she be more aca-amazing?

Wilson presented the MTV Movie Award for Best Male Performance along with her Pitch Perfect 2 co-stars Hailee Steinfeld, Anna Camp, and Brittany Snow. While the entire cast looked gorgeous in their outfits, all eyes were on the Australian comedienne as she ran across the stage while wearing large angel wings over a bedazzled black top and leggings. Her shoes had angel wings on them, too. But Wilson saved the best part of her look for last and waited for the most opportune time to show it off.

In the most "that's so Rebel" way possible, Wilson clumsily dropped the envelope with the winner's name and picked it up to reveal "THINK" printed on the back of her leggings. This might just be a simple design or a parody of the PINK brand to some people, but we prefer to "think" that someone as clever and inspiring as Wilson also wants to send a message to her fans out there. She certainly knows a thing or two about making a positive statement while still using her brand of humor. Never change, Rebel. Never change.