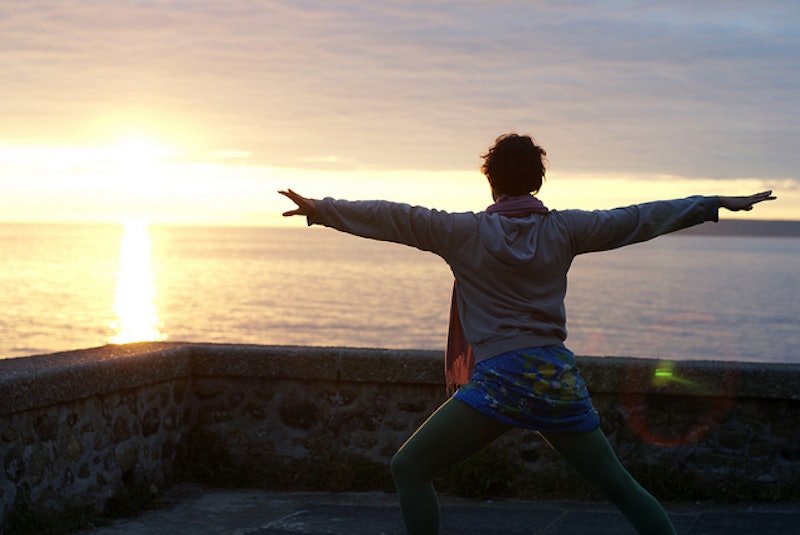 There's a book called The Yoga Body Diet that features a woman with an hourglass shape and a long ponytail sitting in lotus pose. Celebrities such as Miranda Kerr and Jessica Biel attribute their toned and tiny physiques to regular yoga practice. Pinterest and women's magazines are full of of references to the yoga body, usually alongside photos of thin, mildly muscular and sometimes sexualized women in hyper-contorted poses on some beach, mountain or urban rooftop farm.

But while it's great that people are proud of their yoga efforts — and yoga can be a great workout — the photos often border on thinspiration, and even those truly celebrating the beauty, skill or power of yoga tend to feature the same body types again and again. They perpetuate an idea that there is one type of Yoga Body, which can be alienating to people who may want to try yoga but, you know, maybe have another body type.

"Many of us have been put off and intimidated by the "model-perfect" yogi on the next mat pushing up into handstand or backbend with dancer ease," wrote Lauren Walker at Mother Nature Network recently. "But the benefits of yoga can be accessed by anyone. ... The beauty of yoga is that it meets you where you are."

The yoga body myth can also hurt regular yoga practitioners, of course, by making people question themselves when they don't get the same results or can't get into those crazy poses. Or question other people. Canadian yoga teacher Samantha Menzies blogged Thursday about a student who pointed out that her body differed from other yoga instructors and asked if she was trying to change that. Her response is great:

No, I’m not trying to change my physique because I can’t change my bones or where I carry my body fat or the length of my arms (which, fyi, are not long enough for yoga). This body is all I’ve got so this is what I’m going to have to work with. This body will give me a greater appreciation for what I can do.

Rachel Priest echoed this sentiment in a recent article on Elephant Journal, "This is What a Real Yoga Body Looks Like," which featured a picture of her doing yoga at the beach. "I will never look like a typical tiny yoga teacher, but you know what? I look pretty freaking good — I am strong, flexible, knowledgeable and want to help people," Priest wrote.

Yoga teacher Alanna Kaivalya says that not only is the typical yogi pictured in magazines and ads not representative of her, it's not representative of many or most people who practice yoga. "After years of dedicated practice, sometimes rigorous vinyasa practice even, we may still just look... like ourselves. So I guess the question is, can we start celebrating that?"

Because the truth is, obviously, any body can be a yoga body. Are you doing yoga and not a ghost? You have a yoga body! Anyone who's been to yoga classes knows that yoga bodies come in all shapes, sizes and ages and — outside of maybe certain segments of certain coastal cities — are usually more likely to come in hoodies and Target leggings than Lululemon, also. Yoga really is about calming down, figuring out what your body needs and figuring out what you can do with your body to give it that. Perfect postures are nice, but "the awesome thing about yoga is that it’s about self-acceptance and self-awareness," as Menzies writes. "It’s about creating a moving meditation. Anyone– any body– can do these things."