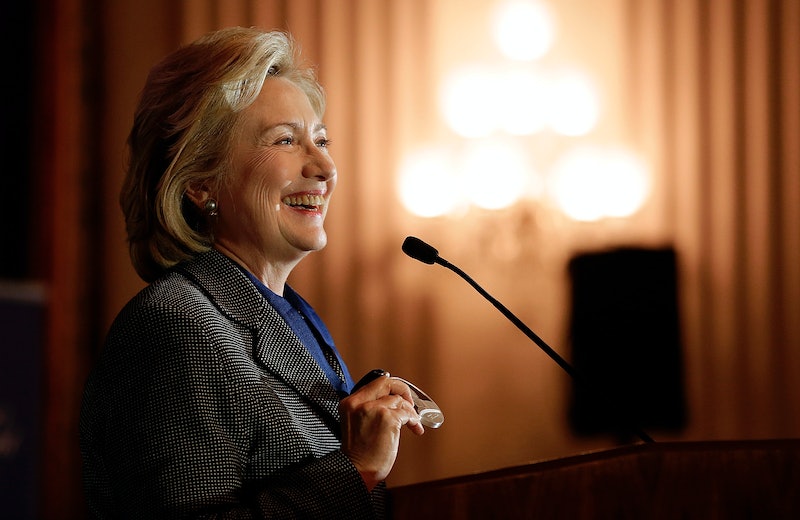 So you’re at a party, and someone says something ignorant. And while you know that they’re in the wrong, and that you could totally engage them and win if you were a bit more prepared, your words escape you. To make sure that doesn’t happen, we’ve compiled a series of handy reference guides with the most common arguments — and your counter-arguments — for all of the hot-button issues of the day. Today's topic: How to argue for Hillary Clinton.

Your Response: I'll grant you this much: anyone who decides they want to run for president is likely someone with profound, possibly unrealistic levels of personal ambition. "Yes, I think I'm pretty much the ideal person to lead the world's foremost superpower!"

It's worth asking yourself why this particular charge is brought up so readily against Clinton compared to some of her high-profile contemporaries. After all, Rand Paul wants to challenge people to duels when his integrity is called into question, and Ted Cruz thinks of himself as a latter-day Galileo. If the best critique you have of Hillary Clinton is that she's fond of herself, your next trip into any voting booth is going to be a pretty agonizing process.

Common Argument #2: Isn't she getting up there in years?

Your Response: Nope! I mean, at least not relative to the sorts of people who've run in the recent past. In 2008, the GOP nominated Senator John McCain at age 72, and in 2012, their pick was former Massachusetts Governor Mitt Romney, who was an admittedly awesome-looking 65. And Clinton will be 69 on Election Day, just like Mitt! So if you're a conservative who was jonesin' for a Mitt Romney redux four months ago, just know that this is an obvious double standard.

Basically, the rush to label Clinton as "too old" is deeply unfair, and some quite plainly view it as sexist. Personally, I'm a little uncomfortable with the whole concept in a general sense — while I acknowledge the immense stresses of the job make health and fitness a major concern, it's also a shame that eminently qualified candidates get excluded by virtue of a few extra years.

Common Argument #3: Why does being First Lady somehow qualify you to hold elected office?

Your Response: Insofar as politicians need to be savvy with handling the glare of the public spotlight, it's a pretty decent preparation. First Lady is a high-profile position in our country, and Clinton was a particularly involved one, going so far as to craft the Clinton administration's ill-fated health care bill in 1993.

Taking your point, however, you're right that there's nothing intrinsic about being a First Lady that would make her a good President. Luckily, that's why she's not just a First Lady, but also a two-term Senator from New York, and a Secretary of State!

Common Argument #4: But that's why she has that political career, because she was married to a President.

Your Response: This is another example of a wild double standard that's applied to Clinton, as compared to countless politicians in Washington, D.C. right now. The cold truth is, not everybody has a political origin story that's going to light up a room, or lend itself to a mythic narrative.

Hillary Clinton was a First Lady, the wife of a popular Democratic President. Rand Paul was an ophthalmologist, with a political cult-hero for a father. These are easy advantages to attack for attacking's sake, since they undoubtedly help to jump-start a career, but there's no denying that this is a broader problem — people who walk the halls of power often boast immense positions of privilege.

In other words, it's better to look at her actual record as an elected official, if you're trying to wage an honest argument between her and any other candidate.

Your Response: I get this, I really do. Let's admit it, American liberals probably think the same thing when the Bush family rears its head — although that family's legacy, frankly, dwarfs that of the Clintons. There aren't any Clinton kids, siblings, or relatives in elected office right now, and by comparison the Bush family feels like one major party politician after another — George H.W. Bush, George W. Bush, Jeb Bush, and now Texas Land Commissioner George P. Bush, Jeb's son.

But we do have rules in our Constitution about who can be President: an American, over the age of 35, two-term limit, you know the deal. And there's no stipulation in that the person can't be the relative of a former President!

And, for all the talk about American monarchy, let's be honest: even if Clinton wins, she won't actually be some sort of reigning queen. She'll face the same governing process, political squabbles, criticisms, and term limits as anyone else would. In other words, she'll be the president, until she isn't anymore.

Your Response: It was unavoidable, wasn't it? This has been kicked around an awful lot now, so here's what I'll say: we've already had one Republican-led Senate report on the 2012 Benghazi attack conclude that the direst allegations of the far-right were unfounded. That hasn't stopped the push, however — the GOP will be moving forward with a probe into Clinton's role in the incident, and her use of a private email account to conduct State business..

And considering the long history of fatal attacks on consulates not in Benghazi, (dating back into the Bush administration, naturally) this level of years-long, fervent scrutiny seems at least a little suggestive. Could it be that the long-term fixation has more to do with finding any credible lines of attack to bring down a major presidential contender? I couldn't possibly speculate.

Common Argument #7: I vote Democrat by default, but I don't like being pressured to support her uncritically.

Your Response: I absolutely agree! You're absolutely right that if you're just not down with Clinton's politics as much as you'd like, you should go out and tell your friends about who you think should be the Democratic nominee — maybe you're a Jim Webb superfan? I'm sure those exist.

And even further, if you're a member of a traditional Democratic constituency — like black women, for example, who supported President Obama by a staggering 90 percent margin in 2012 — and you feel like your issues are being overlooked, go out there and give them hell.

Obviously, there's a sort of deference to reality that inevitably, eventually comes into play in situations like these. At the end of the day, given a choice between a Hillary Clinton you have some issues with and a Republican candidate who might want to repeal Obamacare, strip American women's reproductive rights, and twiddle their thumbs while the mercury rises, it's pretty clear what most left-leaning voters will decide. But that's with shared interests to listen to one another, free from defensiveness, dismissiveness, and condescension.