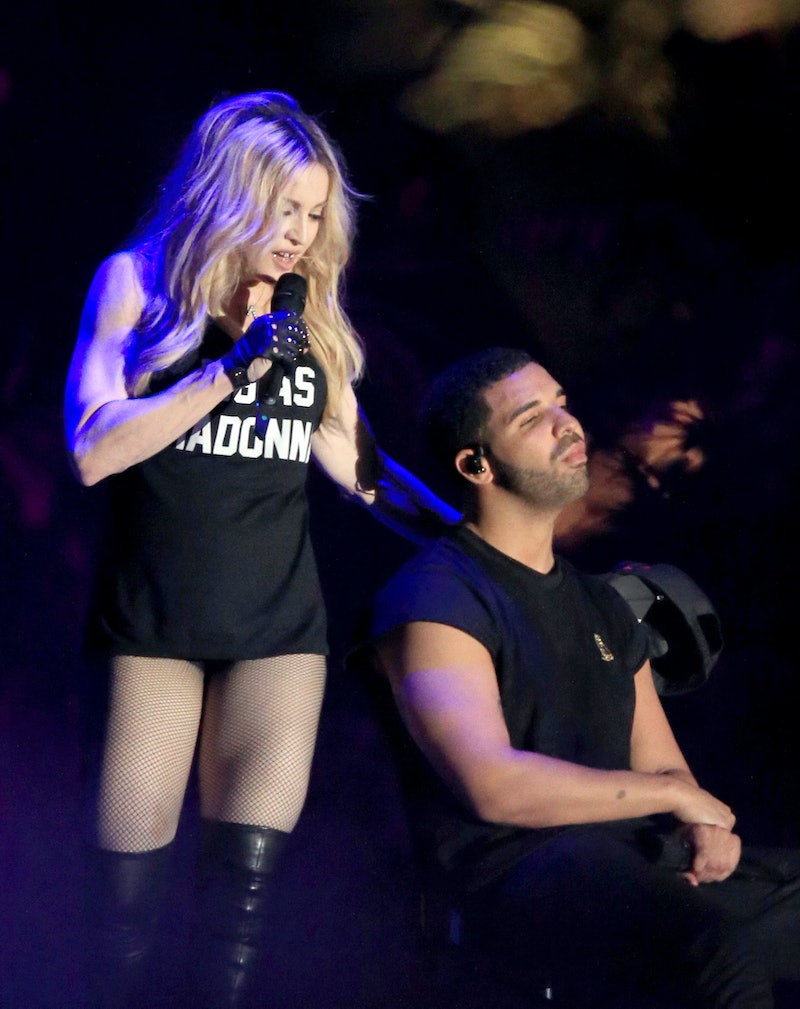 That's a sentence that I never thought I would write, but there it is nonetheless. During Coachella on Sunday night, Madonna kissed Drake when she crashed his set — if by "crashed," you mean "was invited there as his surprise guest" — and the audience reaction to the move was horrifying. The skit came after a medley of Madonna's songs, which included "Human Nature," "Hung Up," and "Express Yourself," and then featured Drake struggling against her before sitting up with a disgusted look on his face. Naturally, this prompted the Internet to begin making jokes about how old Madonna is, because that is obviously the most important part of the sketch.

Ageism is something that Madonna has been facing and fighting against for years out of her career. That's just bound to happen when your status as a legendary pop icon spans as many decades as Madonna's has. The jokes that were running rampant on Twitter were nothing new or original, really. They were just disappointing ways to react to a stunt that could have prompted so much other discourse. After all, even now, I'm still not sure if I'm hoping the skit was scripted the way it was or not. The allusions to harassment are too clear for me to be entirely comfortable with that either as an impromptu move or a pre-planned bit of acting. But, no, first, let's make jokes about Madonna's age.

Okay, we get it. Madonna is 56 years old. She's sooooo old. She's the oldest! Cue my eyes rolling. I've never found that "joke" funny to begin with, but there are only so many times that people can reach for that one first before it starts to get stale. The fact of the matter is, that is far from the most important thing to criticize about the Drake and Madonna sketch. For me, there are two aspects of the kiss that stand out as particularly uncomfortable. The first criticism is of Madonna, based on Drake's clear desire to get away and even clearer disgust at the kiss. Does that mean the move was unscripted? If he didn't know it was happening, and didn't want it to happen, then Madonna should be criticized for forcing it to go on for as long as it did and for pulling such a move on Drake to begin with. Bringing her on as his guest did not, after all, give her the liberty to kiss him without his permission.

The second criticism is of Drake, based on the clear fact that he positioned himself to receive the kiss. Does that mean the move was scripted? If it was, then why was it necessary for Drake to claw at the air and then react with such disgust at kissing Madonna? If he knew that the kiss was happening, and had consented in order to put on a show, then the fact that he closed out the move with a face that implied he'd rather be licking a dirty ashtray than locking lips with an icon like Madonna was incredibly inappropriate. Not only did it form the basis for much of the jokes about Madonna's age, but it was just rude and hurtful. Even if that was a reflection of how Drake really felt about the kiss after the fact, he's an actor. He could have schooled his expression until he got backstage.

And that's what makes it so hard for me to be entertained in any way by the kiss heard 'round the world. Whether the kiss was scripted or not — and I'm leaning toward scripted considering she topped off the move with a proud statement of "B****, I'm Madonna" — it was still uncomfortable to watch because of the reasons listed above. It's even more uncomfortable that the popular response to the moment is to see how many ageist jokes a person can possibly fit into one tweet. Of all the things to focus on, Madonna's age is the worst, the most irrelevant, and the laziest. A woman's age should never be the butt of someone's joke and, in the words of Madonna herself, "Women, generally, when they reach a certain age, have accepted that they’re not allowed to behave a certain way. But I don’t follow the rules. I never did, and I’m not going to start."

Check out the infamous kiss below.