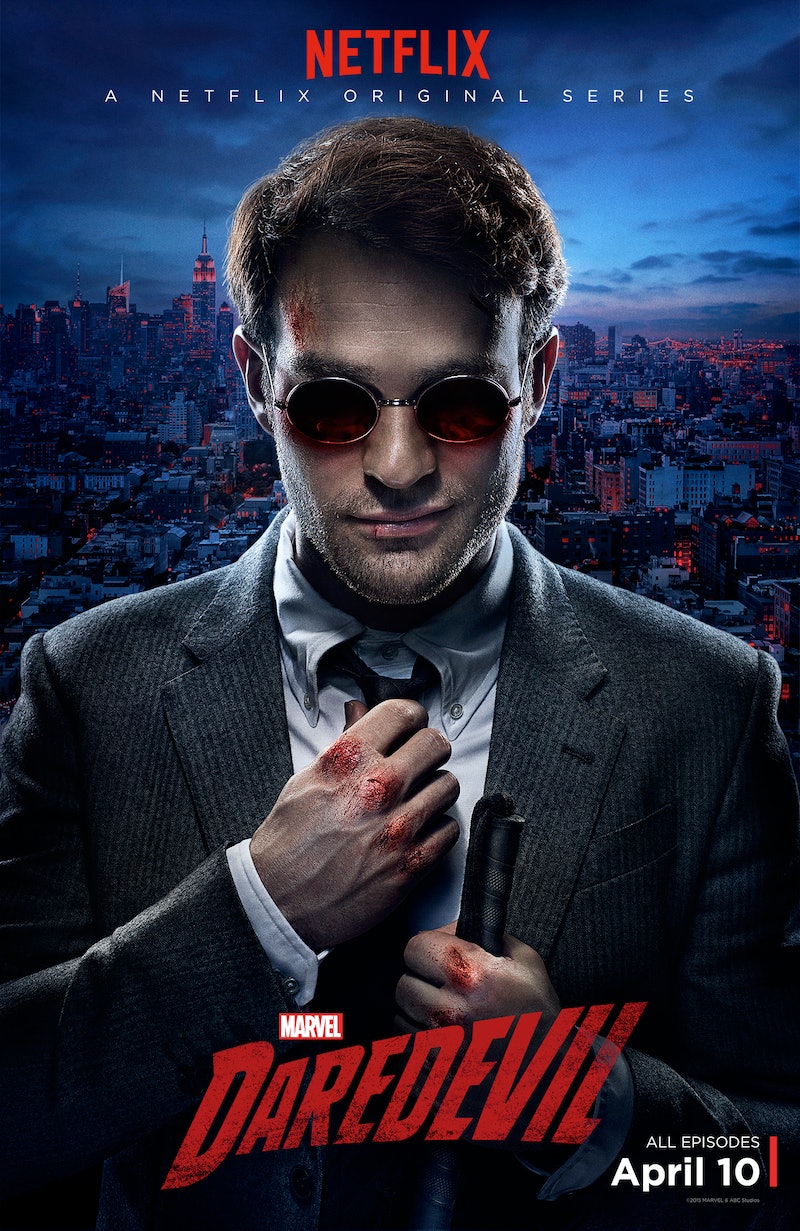 By now many of you are probably be done watching Season 1 of Netflix and Marvel Television's new series Daredevil . If you're a normal human who isn't completely obsessed with marathoning an entire series in one weekend, good for you and maybe don't read this post just yet. The series is an effectively dark, fascinating look at a wonderful Marvel comics character who is finally getting the proper attention and care he deserves (no offense to Ben Affleck). But it's more than that. The series creator Drew Goddard and the writers took painstaking efforts to make sure that the series was not only in keeping with the spirit of the Daredevil comics, but also made sure that the show referenced characters and storylines that are coming up in Marvel cinematic universe and who could potentially make a difference in the as-of-now unwritten future. And that means that there are insanely cool Marvel Easter Eggs in Season 1 of Daredevil .

Some of the references are obvious; for example everyone is likely to catch the hints to The Avengers and the battle of New York City, but then the show also references small-time criminals and side characters that are all but forgotten until now. Since Daredevil is the first show Netflix is making with Marvel Television — we also have AKA Jessica Jones , a Luke Cage series, and an Iron Fist series to which we can look forward as well as a Defenders miniseries with all four of these heroes — there was no way the show wouldn't be peppered with all kinds of hints and allusions that will obviously become relevant later. As a Marvel nerd, I caught quite a few look-backs (and some things looking forward), but these are just some of the Easter Eggs I caught in my careful watch of Daredevil.

There are many references to the Avengers in Daredevil. First we hear many people talking about "The Incident" that took place in New York, and we hear Foggy and Matt talking to a realtor about how they can afford their new office thanks to all the destruction of Midtown from the Avengers battle of New York with Loki and the Chituari. Plus, Fisk's attempts to "rebuilded the city" are perfectly masked as good deeds thanks to the destruction from the Avengers. But even more so than that is the motion poster released for the series which gave us a very quick, very blurry glimpse at the Avengers tower in the right hand corner of the motion poster.

The costume first worn by Matt Murdock in the Netflix's series is a direct reference to the original costume for Daredevil from the first issue of the comics.

So this character is a bit confusing. Claire Temple and The Night Nurse are actually two different characters that the Netflix series fused together. Both are nurses but Claire Temple is actually a romantic interest of Luke Cage, while the Night Nurse (aka Linda Carter) is a nurse who appears alongside many comic book heroes from Marvel. She even assists in helping people during the Civil War comics. That means Rosario Dawson could not only appear in Captain America: Civil War, she could also make her way to the upcoming Luke Cage Netflix series!

Being the giant nerd that I am, I looked around for the translation of this shipping container. Apparently it says Asano Robotics which is the company involved with The Steel Serpent, an evil organization from the Iron Fist comics. Because we are going to be seeing an Iron Fist Netflix series as part of their Marvel shows (along with AKA Jessica Jones and a Luke Cage series), it's likely that the Daredevil writers are trying to find ways to tie the shows together for the eventual upcoming The Defenders miniseries. It's also possible that Madame Gao from Daredevil is the Crane Mother, who is also directly related to Iron Fist. So many connections!

He's not just some moneyman for Fisk. Leland is actually the name of the supervillain The Owl in the Daredevil comics.

When Stick arrives to New York City, we hear about his mission and we see him talking to some mysterious man after he kills The Black Sky. This is a reference to Stick's ninja organization The Chaste which protects people from the evil ninja group The Hand. This storyline will likely (and hopefully!) be explored in upcoming seasons of Daredevil, especially since Nobu seemed to be a member of the Hand.

In Daredevil's final episode of Season 1, we see Wilson being transported to a drop site to meet Vanessa and escape the city before Matt finds and kick his butt. The name Summerville could in fact be a reference to Marvel's Punisher comics which includes the character Mr. Summerville, who actually owns a chain of department stores bearing the same name!

Matt was said to be at St. Agnes Orphanage until he was picked up by Stick for training. This is the same orphanage that Skye was at for a while as told by Agents of S.H.I.E.L.D.

Ben Urich is a staple in the Daredevil world but one change the series makes to his character is that he no longer works at the Daily Bugle, but at The New York Daily Bulletin. Ben has also written about the Avengers' Battle at New York and other major news stories from the other Marvel films. But it's unfortunate that we don't get the Daily Bugle here because it could have tied him in with J. Jonah Jameson and Peter Parker.

See those weird metal stilts in the corner? Those become part of the outfit/armor for the villain Stiltman. Stiltman is worn by many people over the years but Daredevil introduces us to Turk Barrett, a lowlife criminal who in the comics, steals the Stiltman armor for a while but gets easily defeated by Daredevil.

Melvin Potter isn't just some guy who makes things like suits for Fisk. He becomes the villain Gladiator. The series even hints at this by quickly showing us some of the saw-like weaponry he's made in his workshop.

Fisk's love interest Vanessa (who becomes his wife in the comics), makes a joke about a guy who once hit on her that wore a white suite and ascot. This is a play off of the Kingpin's actual costume in the comics.

I know what you're thinking: This is Karen Page, not Elektra! But in this photo, Karen is wearing a Brooklyn Bolts T-shirt. While this could just be a fictional team and nothing else, it could also be a reference/Easter egg for the Thunderbolts, a team of which Elektra was a part. Foggy also mentions in a flashback about a "smokin'" Greek girl from Matt's past. That has to be a reference to Elektra, right?

As per usual, Stan Lee makes a cameo in his a project involving Marvel. There he is in the photo on the wall behind the desk sergeant.

The next Captain America film seems to be based on the "Civil War" storyline in the comics where superheroes are on opposite sides of a new registration bill in the government requiring heroes to reveal their true identities if they want to keep fighting for good. In the poster behind Matt, you see the words "You don't have to reveal your identity to help solve violent crimes." Obviously the poster is referring to civilians using things like CrimeStoppers, but could it be hinting at more?

Across from Nelson and Murdock, we see the door for Atlas Investments. This is a direct reference to Atlas Comics which was the original name for Marvel. The logo is even the same.

Speaking of Nelson and Murdock, the old company's name is still visible on the door: Van Lunt Real Estate. This is an egg in reference to Cornelius Van Lunt from the comics who is also known as the villain Taurus.

Rigoletto is mentioned on more than one occasion. He was in the comics as a mob boss and what the Daredevil series doesn't really tell us much about is that Rigoletto actually gave Fisk his start in the crime world, but Fisk later killed him and took over his operation. Though I guess it could be easy to draw that conclusion based on what we saw from Fisk's flashbacks.

This isn't just a throwaway line from Claire. "Mike" is actually the name of a weird alter-ego that Matt created for a while in the comics. He was supposedly Matt's twin brother but was really Matt in disguise acting like a completely obnoxious weirdo. The character was stopped quickly after he was introduced.

Not just a corrupt boxing guy. In the comics, Roscoe is known as "The Fixer" for fixing matches and for being a generally bad villain.

22. The Chemical Barrels From Matt's Accident

This is quite the obscure reference, but the barrels that contain the chemical waste that blinds Matt have the number "0464" on them, which could be a reference to the first Daredevil comic which was debuted in April of 1964.

The WHIH News division has been present at every major Marvel-related incident throughout the years. Can't be a coincidence, right?

Roxxon Corporation has been in the Marvel Comic universe for years and years, including other films from Marvel as well. Roxxon was the corporation responsible for killing Tony Stark's parents. They have also been mentioned as an evil corporation in Marvel: Agent Carter and Iron Man 2.

See the name Barton up in the right corner? Could that be a reference to Hawkeye, Clint Barton, or someone in his family? It's certainly a possibility.

The playing cards could be a reference to one of Daredevil's greatest foes as Bullseye often used playing cards as weapons. But if that doesn't convince you, what about the sniper that took out Officer Blake? He appeared to be carrying an Ace of Spades. Could that man who is clearly working for Fisk be Bullseye? Hopefully we'll see him officially in Season 2!

More like this
12 ’90s Movie References You Missed In 'Do Revenge'
By Radhika Menon
Nicola Coughlan Shared A Lady Whistledown Excerpt From ‘Bridgerton’ Season 3
By Grace Wehniainen, Alyssa Lapid and Sam Ramsden
Mike Flanagan Teases 'The Midnight Club' In This Exclusive, Creepy Clip
By Grace Wehniainen
Caleb McLaughlin Details Racism From 'Stranger Things' Fans
By Radhika Menon
Get Even More From Bustle — Sign Up For The Newsletter