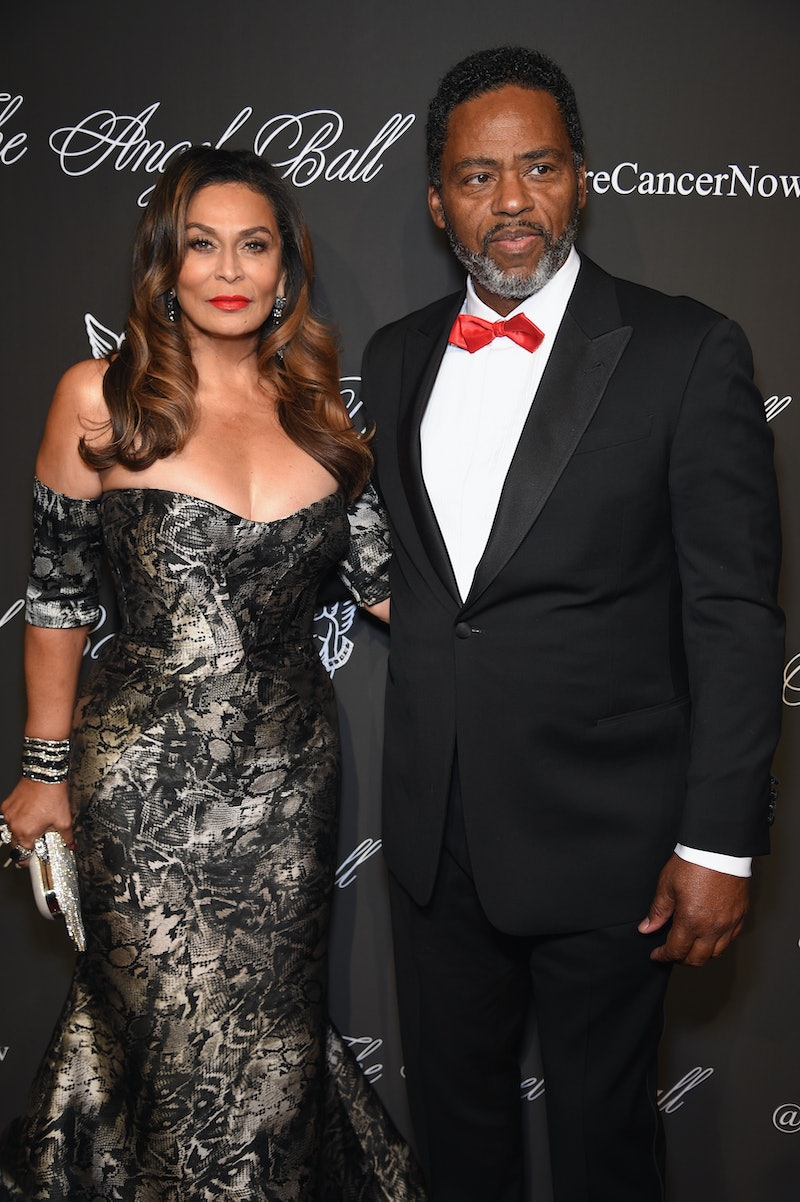 I've always been a fan of Tina Knowles — known affectionally by Beyoncé fans as Miss Tina — because she casually raised one of the biggest global superstars. Beyoncé and Solange Knowles always credit their mother as being the one to instill within them their inspiring girl power and, of course, fierce sense of style. Well, momma deserves some lovin' of her own, and over the weekend, Tina Knowles married her long-time boyfriend Richard Lawson on a fancy yacht, because why wouldn't you get married on a yacht if you're that fabulous?

The couple, who has been dating since 2013, looked like they stepped right out of her daughter Solange's epic all-ivory wedding to Alan Ferguson last November, which set the Internet on fire with its sheer gorgeousness, at their own wedding. The Lawson-Knowles nuptials took place on a 300 person yacht which cruised around the Newport Beach Harbor in California on the evening of April 12, and Lawson and Knowles stunned in their white ensembles in a photo posted on Beyoncé's official website. To keep with the look, the rest of the family, including Jay Z and Blue Ivy, were snapped rocking all white. Can't blame the family for being effortlessly curated at all costs, right?

After checking out the attractive couple, I had to look up Richard Lawson, and I definitely didn't know that he was an actor. He has been working in television since the '70s and is most widely known as playing a parapsychologist in the classic horror flick, Poltergeist. So, like, Beyoncé's new step-dad was totally in one of the creepiest movies of all time and it only makes sense because the Knowles' only hang around with the best, amiright? A few months ago, Beyoncé and Jay Z were seen with Tina and Lawson, who they whisked away for a vacation in the south of France.

One other interesting new development that I learned due to this wedding is that Solange and Beyoncé now have a new stepsister! Richard Lawson was previously married to Denise Gordy (yes, of the Motown Gordy's) and they had one daughter, Bianca Lawson. Bianca has been working as an actress since the early '90s, although it is hard to believe that considering she looks really, really young and there have been plenty of articles discussing her apparent agelessness, a la Jared Leto and Gabrielle Union. I just have to warn you right now though, if you look up Bianca Lawson, she's been in pretty much all of your favorite movies and shows, which means I'm even more jealous of Beyoncé than I was before.

She's had recurring roles on Saved by The Bell, Sister, Sister, Buffy The Vampire Slayer, Dawson's Creek, Pretty Little Liars, The Vampire Diaries, Teen Wolf, and the list continues. Sounds like this family is into supernatural roles, and considering how young the Knowleses and Lawsons look, this all kind of makes sense.

It sounds like the fans are also super stoked about the new Lawson-Knowles step-family situation, and I honestly can't wait for their official family portrait and holidays together. Congratulations again to the fabulous couple!