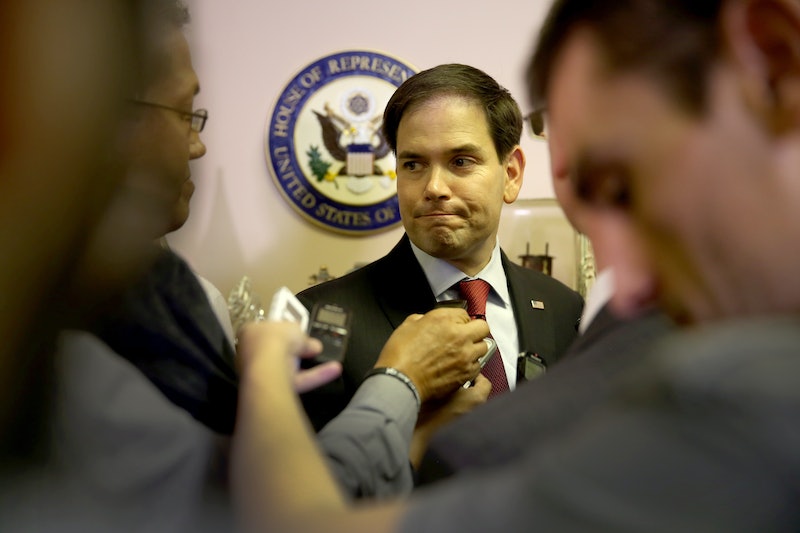 With various social topics like abortion and gun control topping the list of talking points in the upcoming election year, it makes plenty of sense that a candidate like Florida Sen. Marco Rubio (R) would take a hardened stance on those issues, predictably to garner positive press with his buddies on the right. But it's Rubio's changing official stance on gay marriage rulings and their legitimacy that may cost him at the polls while simultaneously alienating the more centrist voters in the Republican Party.

"My position on [gay marriage] is pretty well-known," said Rubio in a now-confusing interview with CNN back in January, as the fight for marriage equality began ramping up in states like Alabama and Texas. "I believe that the institution of marriage is defined as the union of one man and one woman, [but] I understand that voters in some states have changed that, and I respect it." Whatever the U.S. Supreme Court ruled on the issue eventually, added Rubio, "we're going to abide by it and respect it [as well]."

Rubio's comments fly in the face of his own actions regarding the topic of marriage equality. As Salon reported on Monday, Rubio has a definitively "mean-spirited" history of hampering the rights of LGBTQ citizens — including those who haven't yet gained permanent residency here in the United States.

After Russia passed a discriminatory measure in 2013, allowing for the bullying of the LGBT community using a loophole that would prohibit the dissemination of "gay propaganda" (an all-encompassing term that covered topics such as discussing homosexuality with children and holding gay pride parades), Rubio backed out of a whiplash deal with Sen. Patrick Leahy (D-Vermont) that would have allowed gay and lesbian spouses in the United States to sponsor their foreign partners for permanent residency. "If this bill has in it something that gives gay couples immigration rights and so forth, it kills the bill," Rubio said in a interview for Fox News' Andrea Tantaros' radio show that month. "I'm gone ... this is already a difficult enough issue as it is."

To the more open-minded, the idea of killing a measure that would essentially give shelter to those fleeing a country bent on eliminating them in the long run is baffling. But for many in the GOP, it was business as usual. If Rubio had stopped there, he might have clinched the hearts of conservative voters easily.

But since his January statements, which indicated he would be willing to deal with a potentially pro-LGBT marriage SCOTUS ruling, Rubio might be more on-track for a grueling debate circuit than an easy promenade at the polls. With 2016 opponent Sen. Ted Cruz (R-Texas) already stepping up his biting rhetoric against the LGBTQ community (namely comparing them to jihadists intent on "going after people of faith who respect the biblical teaching that marriage is the union of one man and one woman"), and Kentucky Sen. Rand Paul already falling behind in terms of supporter numbers (effectively taking him out of the running in any logical, long-term capacity), the spotlight is squarely focused on the tiniest details of Rubio's political history and on every unnoticed slip-up in verbiage to see what he does next.

If he wants to win the highly partisan vote, Rubio will clearly need to follow Cruz and other GOP candidates to the right-end of the spectrum. Any indication of moderate social views and Rubio might pay dearly.

That's not to say that he isn't already making the effort: In a Jan. 7 interview with Politico, Rubio criticized LGBTQ advocates for pushing their agenda on the courts. "If they wanted to change that law, they should have gone to the legislature or back to the Constitution and try to change it," said Rubio. "You go through the legislature, or you go on the ballot, but I don’t agree the courts have the power to do this."

In the span of one week, Rubio both criticized the courts of belaying important legislative measures already voted on by the public and agreed to lay down his arsenal if they overturned a discriminatory vote. Curiously, it seemed, Rubio was reaching out to the wider public, rather than honing in on one corner of it. But in the run-up to an election year, moderate generosity doesn't always work. Sometimes, it simply backfires.

Whether Rubio decides to get tough on the issue of same-sex unions and match the majority of his fellow GOP candidates might decide whether the Florida senator becomes a serious contender or simply a footnote in the history books. For now, the flippantly back-and-forth Rubio needs to take a solid stand and give the American people time to consider (or perhaps reconsider) their votes.