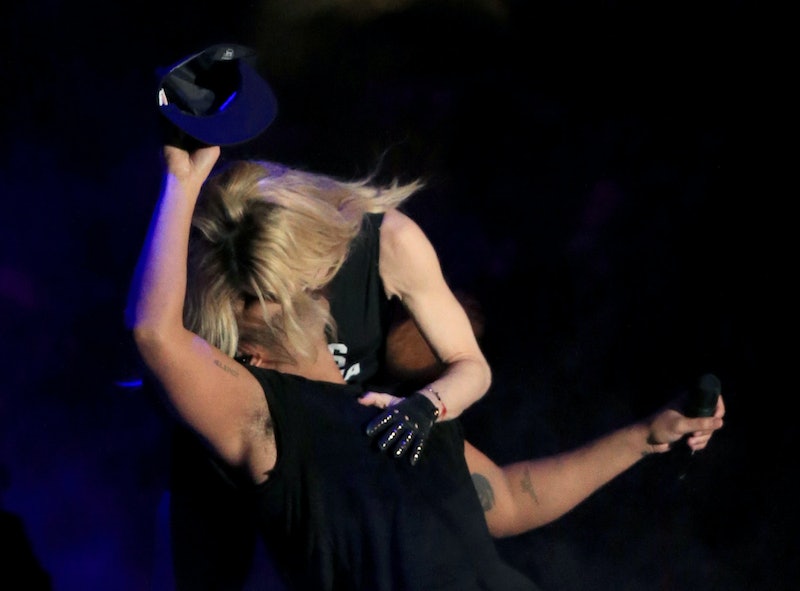 I've lived through a lot of landmark historical moments in my lifetime. The original iPhone, Janet Jackson's Superbowl nip slip, the birth and death of purple ketchup, etc. I also lived through the most important kisses of the '00s: Madonna's infamous VMA smooch with Britney Spears and Christina Aguilera. However, in a moment that operates as a surefire sign that I am getting old, Madonna's 2003 VMA kiss might not be the most shocking Madge kiss of the 21st century anymore. The material girl outdid herself at Coachella when she ambushed Drake with an aggressive kiss. Let's compare these three kisses to see whose Madonna kiss reigns supreme: Drake's, Britney's, or Christina's? While the internet was abuzz with the gif reaction of Drake looking disgusted post-Madonna kiss, he claimed it was not because of this kiss, merely because of his dislike for her lipstick.

In order to give these cultural moments a fair analysis, there are a few key concepts that must be noted as these infamous kisses compete head-to-head. Important factors that must be consider include the length of the kiss, the reaction of the the recipients of the kisses, the public reception of said kisses, and Madonna's overall lip-locking form.

It's been over ten years since Madonna's original kissing debacle; let's see how her surprise kisses have weathered the test of time. This is a competition for the ages. Buckle your seat belts, ladies and gentlemen, because it's time for a kiss-off. Madonna kissed Drake, Britney, and Christina, but only one kiss can come out on top.

Exhibit A: Madonna Smooches With Brit at the 2003 VMAs

Britney's Reaction to the Kiss: Britney is unfazed by her lip lock with Madonna. She even goes in with an open mouth. This was no pop kiss; there was definitely tongue involved. Safe to say Britney was into it.

Public Opinion: Although Madonna kissed both Britney and Christina, it was Britney's kiss that had people talking. As noted by Britney's manager, Larry Rudolph, in an interview with Billboard, Madonna's kiss with Britney happened and then "the world exploded as a result."

Overall Kissing Form: 6/10. Madonna was short and sweet with her smooch with Britney but it was well-executed. Not too slobbery, just long enough for the shock factor to register before Madonna pulled away. Nothing cringe-worthy here, just two of the most famous women in the world sharing an intimate kiss.

Exhibit B: Madonna Smooches With Christina at the 2003 VMAs

Length of Kiss: Approximately one second

Christina's Reaction to the Kiss: Christina also seemed to be unsurprised by Madonna's advance. However, the sparks that flew between Madonna and Britney just weren't there with this duo. Whereas Britney's kiss was imbued with passion, Christina's kiss seemed more perfunctory, like a polite kiss shared between two gal pals.

Public Opinion: Christina and Madonna's kiss just wasn't as memorable as the one Madonna shared with Britney. Christina got Britney's sloppy seconds and, ten years later, it is Britney's kiss that is still talked about.

Overall Kissing Form: 4/10. There simply wasn't enough of emotion behind this one for it to have scored higher. Nothing particularly wrong with Madonna's form here but the lack of passion behind the lip lock forces me to deduct some points.

Exhibit C: Drake is Ambushed by Madonna's Mouth at Coachella

Drake's Reaction to the Kiss: Drake is clearly astonished by Madonna's kiss. After several seconds of compliance, Drake attempts to push Madonna away but she is just not having that. After what feels like hours of painfully awkward kissing, Madonna releases Drake, after which Drake promptly grimaces and literally wipes his mouth off with a look of disgust on his face.

Public Opinion: Drake and Madonna's kiss is making major headlines and the general consensus seems to be the Britney Spear's kiss with Madonna has been usurped by Madonna's Coachella make out with Drake. But the real question is, will we still be talking about this in ten years? That remains to be seen.

Overall Kissing Form: 8/10. While this kiss is will arguably fill you with secondhand embarrassment upon watching it, Madonna wins major points here for sheer entertainment value. What she lacks in form she makes up for with style and thus Madonna gets high marks for her Coachella kiss.

Though it pains me to say this, I would have to say that Madonna and Drake's kiss just might be the most shocking kiss of the 21st century. This kiss will be one to go down in history books and, though I cling to all things from my childhood with fervent nostalgia, Britney and Christina's kisses with Madonna are paltry in comparison to Madonna's endlessly entertaining kiss with Drake. Congratulations to Drake and Madonna, you have officially clinched your spot as the weirdest and most memorable make out of my life span to date.