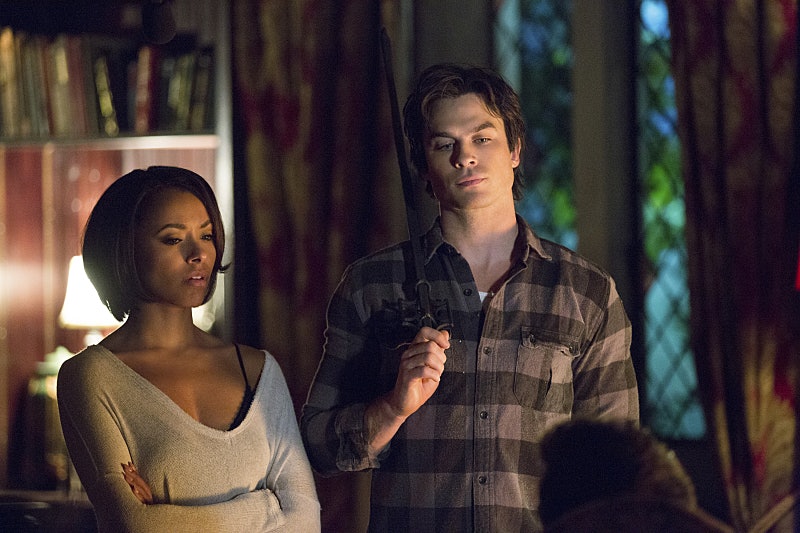 It's been a few weeks now since Nina Dobrev announced that she would be leaving The Vampire Diaries after Season 6, and yet the speculation and theories in regards to Elena's TVD fate continues to spread like wildfire. Will she die? Will she become human again? Is this SERIOUSLY happening right now? However, while her pending departure is very significant, it's also equally important to contemplate what will happen to the remaining Mystic Falls residents she's leaving behind. For example, if Delena is, in fact, coming to an end, then which new love story will pick up the iconic torch? Steroline immediately comes to mind, of course. But what about the show's questionable "will-they, won't they" duo, Damon and Bonnie? Will Bamon actually happen now once Elena is out of the picture? I'd be lying if I said the possibility doesn't seem likely.

However, that's not to say that I'm a huge supporter of this potential new union. In fact, I'd much rather it didn't happen at all. Don't get me wrong, I love the two of them together, but in a strictly BFF capacity. I mean, as rare as it is to see nowadays, sometimes it's just nice when a guy and a girl can be close without it having to lead in a romantic direction. But given that this is TVD that we're talking about here, I highly doubt these two are destined to remain in the "friends zone." Does that make the decision right, though? Let's take a minute to try and re-assess the pros and cons of this possible new TVD endgame.

PRO: They Are Super Cute Together

I may not be a fan of them as an actual item, but I simply can't deny that these two make on-screen magic together each and every week. Not only do they deeply care and have an enormous amount of respect for one another, but they also share the same level of sarcasm in their demeanor, which allows from some pretty great back-and-forth banter. I can't help but want more.

Even if I did want them to be get together, it's going to take a long time for those Delena wounds to heal. Throwing a new love interest into the storyline for Damon too soon could cause certain viewers to lash out simply because not enough time has passed. Damon and Elena's love story was epic, whether you were a fan of theirs or not. So to see him move on or even seek comfort in the arms of another woman throughout the grieving process has the potential to diminish Delena's memory. Not exactly the best way to kick off a romance. Plus, am I the only one who's starting to seriously 'ship Bonnie and Kai? I mean, I know they got off to a rocky start what with all the murder threats, but I think these crazy kids could still make it work.

PRO: It'd Be A Great Excuse To Bring Jeremy Back

If for no other reason than simply to try and kick Damon's ass. (Good luck with that one, buddy.) But hey, if it involves these two characters partaking in some sort of wrestling match (preferably shirtless), then I am ALL for it.

CON: It Could Ruin Their Friendship

As you can see from the numerous hook ups throughout the years, not every TVD relationship is guaranteed to last. What if something happens and they go back to hating each other like they did before? Now that I know how amazing and special their friendship can be, I don't ever want to be without it.

PRO: Bonnie Could Really Use A Win

Let's face it, the girl's been through a lot this season, so having a shirtless Damon serve her breakfast in bed (in the form of vampire pancakes, of course), would certainly help her to achieve that happy ending she so rightfully deserves.

CON: It Would Take Damon Off The Market… AGAIN!

Look, I know he's a fictional character and all, but if Delena has to end, then can't he at least be single for a while? Give the rest of us a fighting chance, Bonnie!

As you can see, I'm a bit torn about the situation. Perhaps it's just best for everyone if Elena stays and Delena lives on forever. OK, Julie Plec? Please?!?!