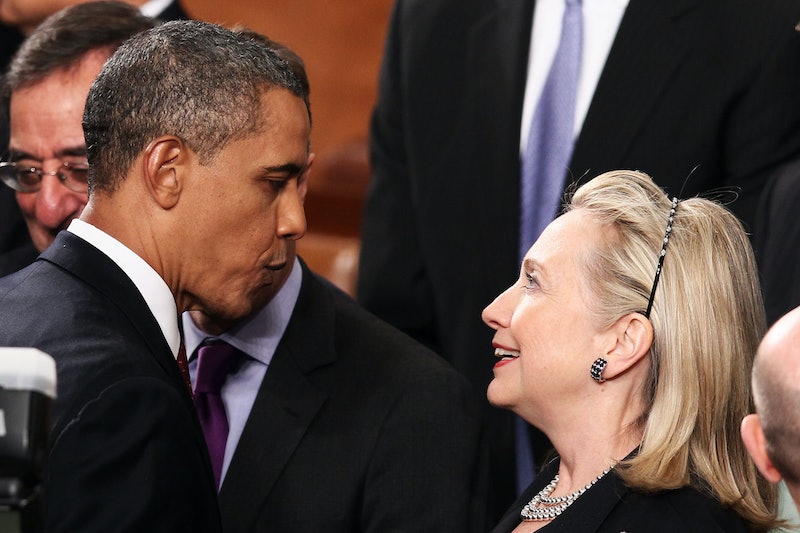 Hillary Clinton announced that she is running for president to much fanfare — understandable, considering the anticipation built from the seemingly unending tease of a Clinton 2016 campaign — and an already substantial network of support. But don't count on the blessing of the current president just yet. White House press secretary Josh Earnest said Obama is not endorsing Clinton any time soon.

Earnest told reporters on Monday at briefing that while Obama liked Clinton, an endorsement would be premature, given that some of the president's other friends may run, too. When asked about it, Earnest said:

The answer to that question is no. As has been speculated by all of you and many others, there are other people who are friends of the president who may at some point decide to get in the race. The president has not offered up any sort of endorsement at this point.

Although Earnest did not indicate as to which of the president's friends he might have been referring to, it is widely assumed — or at least anticipated — that Vice President (and a "very close personally" kind of friend) Joe Biden could take a shot at the presidency.

Earnest added that Obama will support the Democratic presidential nominee in the general election regardless of who he or she may be, The Guardian reported, though the president will let the nation decide the nominee without his interference — which probably means that none of the Democratic candidates in the primary will get the president's explicit endorsement.

However, some have reported that the president is quietly backing Clinton to defend his legacy. Stopping short of endorsing the 2016 candidate, Obama said at a regional summit in Panama on Sunday (the eve of Clinton's big announcement) that she would make an "excellent" POTUS.

She was a formidable candidate in 2008. She was a great supporter of mine in the general election. She was an outstanding secretary of state. She is my friend. ... I think she would be an excellent president.

Obama has also lauded Biden — having touted him in 2013 as "one of the best vice presidents in our history" in an attempt to put to rest the rumors that his administration considered replacing Biden with Clinton as his re-election running mate in 2012 — but as ABC News reported, as the frontrunner of the primaries, Clinton has unabashedly aligned herself with a number of Obama's policies.

Clinton and Obama ran a tight race in the 2008 primaries, which she ultimately lost but later went on to join his administration as Secretary of State for a term. Her husband, former President Bill Clinton, campaigned for Obama's re-election in 2012, which resulted in a wonderfully impassioned speech at the Democratic National Convention.

However, whether or not Clinton can brand herself as a presidential candidate in her own right, without criticizing her friend and possible predecessor, is a dilemma that her campaign team faces as the primaries get ready to gear into full swing.