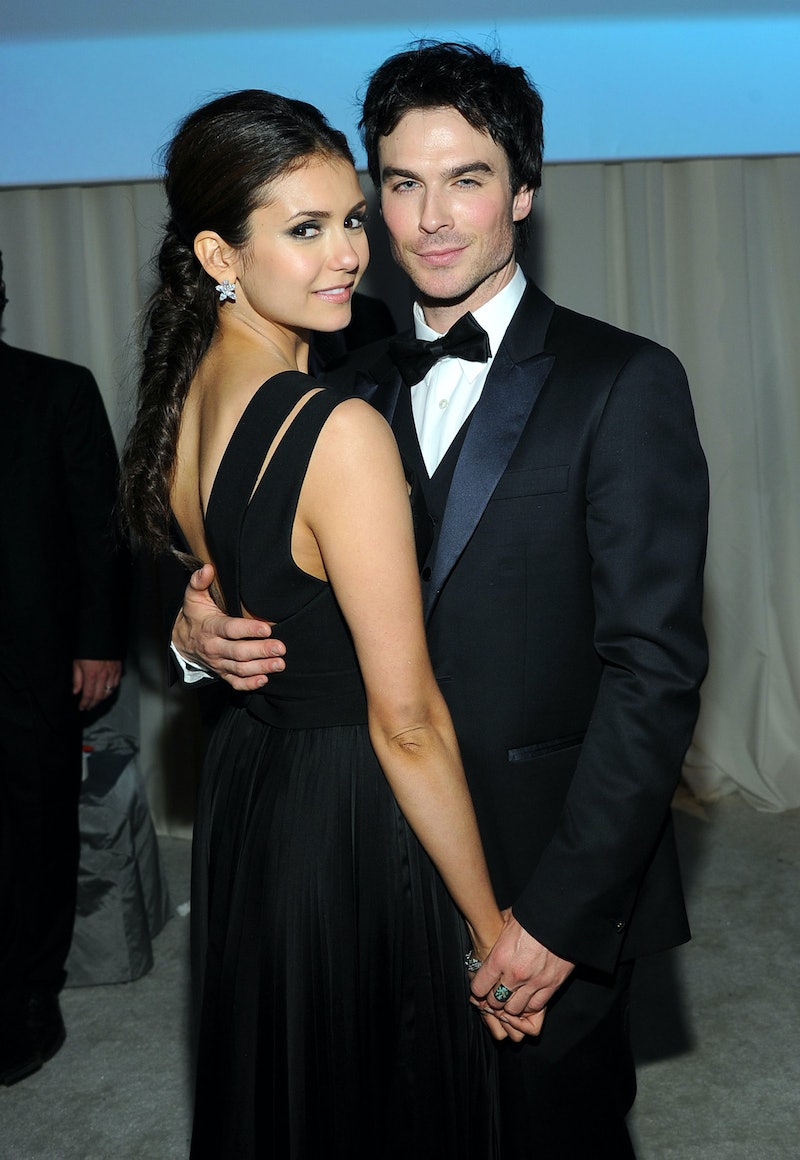 If you're a huge fan of The Vampire Diaries, then I'm sure you're still reeling over the fact that Nina Dobrev is leaving TVD. Did you ever think the hit supernatural CW show would go on without its leading lady Elena Gilbert? Yeah, me either, but it's now a reality TVD fans have to deal with. Ever since Dobrev announced her exit many have been wondering why she is saying goodbye to the show after six seasons. Particularly, some think Dobrev is exiting because of Ian Somerhalder, aka her formerboyfriend of three years. Let me just start by saying, that is a total laugh, because Dobrev and Somerhalder have acted like nothing but adults after going their separate ways.

In 2013, Dobrev and Somerhalder split shocking many fans, because not only did the two seem head over heels in love, but their chemistry on screen as Elena and Damon was something fans couldn't get enough of — and still can't. Well, since they ended their relationship, the actors seemingly are still friends. I've read interviews with both Dobrev and Somerhalder, where they can't help but talk proudly about one another. If only everyone could handle a split like them.

With that said, let's push those rumors aside that Dobrev is leaving because of an ex-boyfriend, and focus on those several times they had nothing but nice things to say about one another after their split, because, yes, they're just that mature and can still be friends after breaking up. Break up goals, people. Break up goals.

When Nina Said This About Ian After They Split

As Dobrev told E! News, "If you're with someone for that long, obviously, there's the qualities in them that you enjoy, and it doesn't change because you're not together anymore. I have an enormous amount of respect and love for him and everyone. It doesn't change. It shouldn't. Otherwise, why were you with them?"

When They Joked About Breaking Up

Remember that time they won a People's Choice Award for Best Chemistry? It was a bit awkward, especially since they recently split, but they handled it in a classy and hilarious way.

Despite breaking up, Somerhalder still wished Dobrev a happy birthday on social media. See? You can still wish the best for your ex-partner.

After taking home the People's Choice Award mentioned above, Dobrev talked about the moment with E! News. She said, "I was trying to figure out, like what do you say in that situation? We were like, well, we're cool, we're friends and costars. He's a great person, I'm a great person... I mean, I think I'm pretty awesome. [Laughs] So it doesn't need to be awkward and I think everyone expected it to be so awkward. We made fun of ourselves and just had fun."

When They Took A Pic During Her Last TVD Days

Dobrev has been documenting her last days on set, and she even shared a special moment with Somerhalder, aka the Smolderhalder, as she calls him in the Instagram caption.

When Ian Revealed Not Much Has Changed

While chatting with Nylon magazine, Dobrev and Somerhalder talked about being exes and how not much has changed. "I don't like any kind of negativity," Dobrev said. "I try to be good to everyone, whether it's a love, a friend, an ex. I'll always try to treat people the way I want to be treated." Somerhalder added, "She always lets me have the last fry."

If you're ever in need of how to act after splitting with someone, may I suggest looking to Dobrev and Somerhalder?