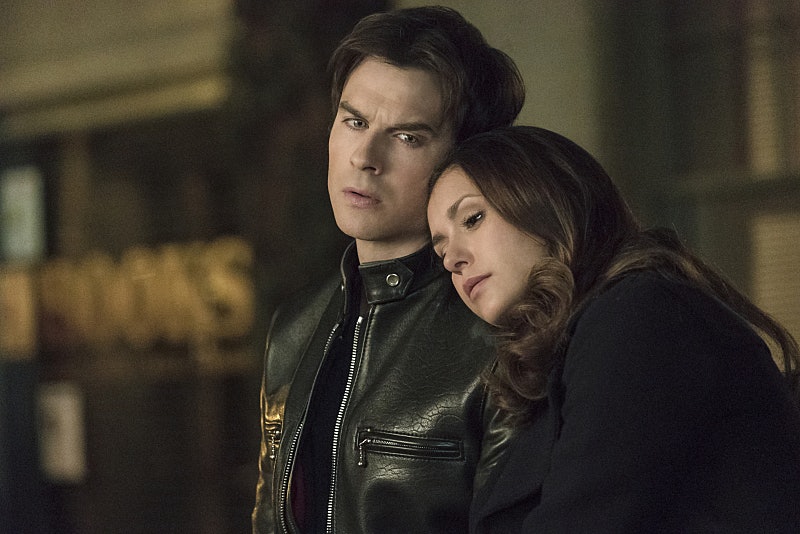 Not enough time has passed since it was announced that Nina Dobrev is leaving The Vampire Diaries after Season 6. Among all of the questions that fans need answered about this devastating news, one of the biggest questions is exactly what prompted her exit. The 26-year-old actress recently answered those inquiries by saying she would like to explore producing, directing and taking over the world sometime in the near future — neither of which she can do with the time commitment required by playing 400 characters on TVD. Still, though, given Dobrev's previous three-year romance with TVD co-star Ian Somerhalder, there are probably some fans out there wondering, did Dobrev leave TVD because of Somerhalder?

Honestly, Dobrev strikes me as a pretty focused and determined chick, so I couldn't imagine a breakup that took place nearly three years ago would cause her to abandon a role that other actresses would probably bite, kill and drink blood to have. I could see her taking a few sick days immediately after the breakup, but I don't think totally walking away from a successful show is Dobrev's style. However, for the sake of quelling curiosity, let's attempt to surmise whether Somerhalder could have possibly had anything to do with sparking her career change.

Now, it was merely a year ago that TVD fans wondered whether Dobrev and Somerhalder were an item again, and were coming up with some pretty good reasons as to why they should get back together. Seeing the couple also known as Delena poking fun at their real-life breakup during the People's Choice Awards and coming together to deliver puppies as if they were still really great friends didn't do much to stop the talk of a possible romantic reunion. Apparently, that all went out the window when Somerhalder started dating Nikki Reed (who also happens to be Dobrev's friend). Sounds like drama...

More recently, it was reported that Dobrev and Somerhalder were no longer on speaking terms. With those allegations came other rumors of on-set tension, which couldn't have made for the most warm and fuzzy working conditions. Even though that speculation sounds way juicier than Dobrev's desire to work behind the scenes, there doesn't appear to be any concrete evidence that Somerhalder caused her to permanently flee TVD. Implying otherwise undermines the mature decision she's made to do what is right for herself and her career at this time — not to mention how it feeds into unconfirmed rumors that are damaging to Dobrev, Somerhalder, and Reed. It's best to accept Dobrev's own words about why she's leaving, and just return to crying that it's happening at all.