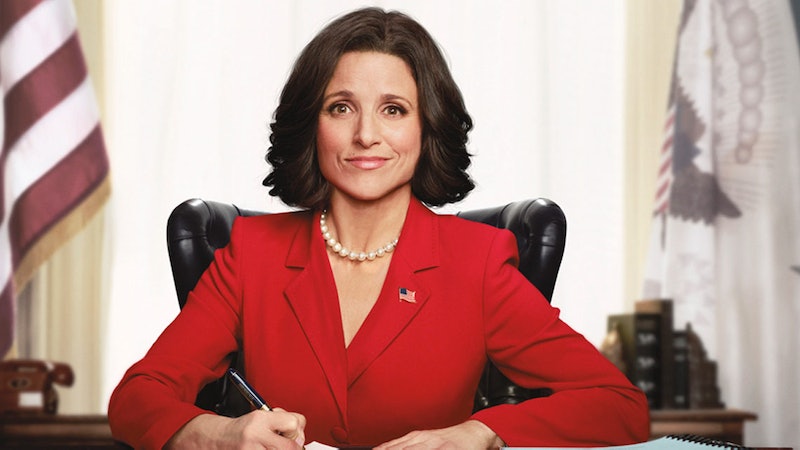 Good news HBO fiends, the premium cable network has already renewed Veep and Silicon Valley for 2016. Both series had their season premieres Sunday night and it was less than 24 hours before both were picked up for another season. Veep has been gradually gaining steam since it first hit the air in 2012 and is now a network staple thanks to Julia Louis-Dreyfus' award-winning performances year after year. Mike Judge's Silicon Valley also earned an Emmy nod in its first year, which helped to cement the tech comedy's place on HBO's Sunday night line up. The show stars a gang of actors who, before landing on Silicon Valley, were known for smaller bit parts in other series and films (including The Office and Party Down). Silicon Valley just might make leading men out of 'em all.

Unfortunately HBO has decided to cut Looking from its programming and will wrap up the storyline with a film rather than a third season and Getting On will finish after its upcoming third season — both series will join the Island of Beloved Misfit TV Shows That Were Cut Too Soon along with Enlightened and Freaks and Geeks. As sad as I am to see Looking and Getting On go, I am thrilled by the news that Veep and Silicon Valley are holding strong. Both series are parallel to current events that are affecting women in big, big ways.

Selina Meyer is no longer a Veep, she's the President of the United States of America. Considering Hillary Clinton just announced that she plans to become the first woman to hold the position of Commander in Chief, Veep stands to become the most politically-relevant show on television. Though Veep already has a focus on how women are treated in politics, its material will now be all the more significant. Selina Meyer might be a comedic character, but she's tough as nails when push comes to shove. I wouldn't go so far as to say Veep will change voters' minds, but it does help make the idea of a female president a little less foreign. The more visible women are in high power positions, the better off we are.

When Silicon Valley first premiered my initial reaction was, "ugh, it's Entourage, but with nerds." There were a lot of dick jokes and 2-D (at best) roles for women. I wasn't enthused by the hot babes fawning all over the rude and selfish programmers and the leading lady wearing tight business skirts while the fellas schlub around in hoodies. In the age of Gamer Gate, the place of women in the technology fields isn't exactly safe and it's far from fair play. Seeing those attitudes reinforced on HBO was less than savory.

But then Season 2 of Silicon Valley premiered on Sunday night and the show actually appears to have learned from its mistakes. (Spoiler alert!) After the death of Peter Gregory, his multi-billion-dollar firm appoints a woman, Laurie Bream (Suzanne Cryer) to take over as Managing Partner because dollar-for-dollar she simply had the strongest results. Yep, a woman was appointed to a top-tier status in a huge company based on her work and numbers. How novel.

Secondly, the show finally gave its female lead Monica something substantial to say — she gave Pied Piper the advice it needed to keep the company from sinking after its first round of investors. It turns out she's been more than just a pretty face all along. It's about time the writers gave her more cred than just being an executive assistant who was in puppy love with Richard.

I'll take more of women in the Oval Office and the Exec's chair, ah-thank-you-very-much.