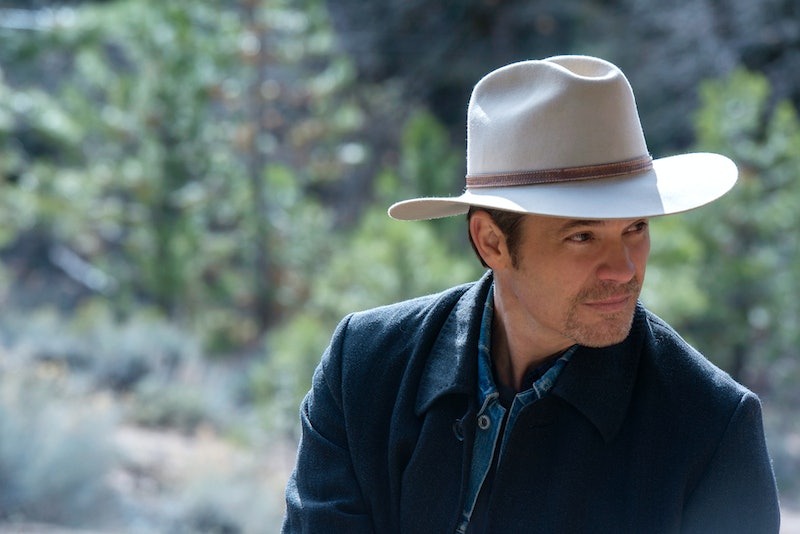 Cue the Boys II Men — its the End of the Road for one of my current, long-time TV relationships. After six seasons, Justified is finally doffing its white cowboy hat and riding off into the Kentucky sunset. And it's one I'm sad to see go. After FX airs the Justified series finale on April 14, there are a few things about the show I'm really going to miss.

After all, procedural and cop shows are a dime a dozen, but none had the same weird alchemy of cop show and Western that Justified had. Maybe that's because no other shows that I know of are set in Kentucky. Half of what was great about Justified can be traced back to its location: the way the mining industry lurks behind all of the evils of Harlan County, the jockeying that the criminal element was doing to prepare for the arrival of legal weed, the specific drawl that sounds so charming on Raylan Givens and so sinister on Boyd Crowder. It's not like another show is just going to pick that all up after Justified is gone.

Until we get another contemporary-Western-slash-police-procedural — if that ever happens again — here are a few things about Justified I'm really going to miss after the series finale.

The Weirdest Villains on Television

There are rogues' galleries, and then there's the motley collection of villains that make up Harlan County. And they're all kind of lovable in their own misfit ways. There's Wynn Duffy, with his weird eyebrows and predilection for his tanning bed. There's Mags Bennett, with her concoction that tastes like apple pie, drinks like moonshine, and then has a fatal kick at the end. There's poor Dewey Crowe, who wanted nothing more than an above-ground pool and a couple of prostitutes to share it with. There's newbie Boon, who gives Breaking Bad's Todd a run for his money in the title match for creepiest young guy in the gang. And then there's the longest-running villain of all, Boyd Crowder, which brings me to...

It's lyrical and poetic in its own way. Justified crime boss Nicky Augustine described Boyd Crowder as someone who's prone to "using 40 words where four will do." No other shows have a villain that's both as redneck and as verbose as Boyd.

Constable Bob is possibly the true hero of the series. At the very least, he can take a punch (or a bullet) and still not give up Raylan Givens.

Elmore Leonard, who wrote the short story that gave the world Raylan Givens, died in 2013. He has a ton of novels, but they're not really hitting the screen like they were when Get Shorty and Be Cool were in movie theaters. Justified was a way of bringing Leonard's gritty, complicated world to the screen, even after he was gone.

The Way Raylan Givens Looks in His Cowboy Hat

Don't get me wrong, Timothy Olyphant brings all sorts of brilliance to the role of Raylan Givens. But the combo of shit-eating grin and white cowboy hat is the one that really kills me. When Justified takes its final bow, that's what I'm going to miss the most.