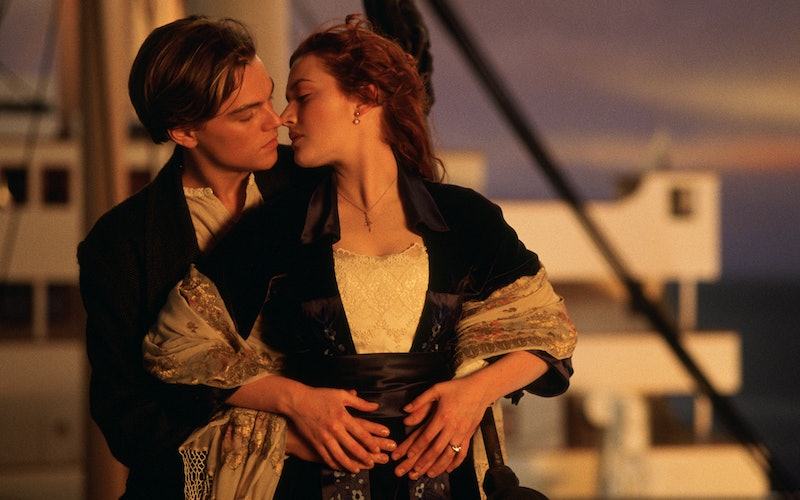 Did you know that on April 15, we honor National Titanic Remembrance Day? You do now. The sinking of the Titanic has its place in American history textbooks, in pages of nonfiction, at the start of Downton Abbey, and as the focal point of one of the highest grossing films of all time. And on this day each year, we remember what happened on April 15, 1912.

The sinking of the RMS Titanic in the dead of night, in the heart of the ocean, while the band most famously played on has been a subject of fascination ever since the tragedy. Throughout history, there are certain occurrences that capture the human capacity for hope, love, possibility, and loss so poignantly that they live on in the collective imagination, in literature, and in art for generations. The sinking of the Titanic — a ship so grand, so monumental, it was deemed unsinkable — was one such moment.

Unlike Downton Abbey's Daisy, who was first touched by the tragedy through the daily paper, my first brush with the legendary event happened in a darkened theatre, on a dreary night, as Leo and Kate acted out one of the most famous love stories of the late '90s — if not all time. The film Titanic captured a generation, and remains a touchstone for many. I know that every time I see a sapphire, those soaring Celine Dion high notes rush right back and take me straight to the haunting loss of that legendary night.

Of course, if your only experience with the Titanic came courtesy of James Cameron, there are a few things you're missing out on. So, in honor of National Titanic Remembrance Day, take a moment to reconsider the epic tragedy from a whole new angle and let the glamour, magic, mystery, and sorrow rush over you. It's an incredible story.

A Night to Remember by Walter Lord

Walter Lord's intoxicating account of the final hours of life, and all too much death, aboard the Titanic is a classic for all the right reasons. Taught, tearjerking, and full of life, this minute-by-minute record perfectly captures the spirit of the ship and the staggering scope of the struggle as she slowly tipped and sunk beneath the waves. First published in 1955, A Night to Remember remains one of the very best narratives of the night that captured the attention of the world.

If the glittering chandeliers and gaudy costumes of the first class coterie Rose was so eager to escape captured your imagination on-screen in Titanic, you're sure to love the spending time in the world of Jay Gatsby and the lost, lonely, utterly lovely Daisy Buchanan. Fabulous parties, daring dresses, and a love that defies both class and convention make The Great Gatsby a perfect novel to memorialize the world so many of the first class passengers aboard the ill-fated ocean liner left behind forever.

With Dead Wake, the incomparable Erik Larson manages to turn another epic saga of disaster on the high seas into a compelling story full of strange twists and unexpected turns. If the tale of the Titanic has caught your attention and tempted you to consider other seaworthy adventure stories, Dead Wake may just be a great way for you to commemorate this National Titanic Remembrance Day.

Sometimes a human story is what can best capture the emotion at the heart of a great tragedy, and Erik Fosnes Hansen's rich, artfully rendered fictional tale of the band that played on as the ship went down brings the elegant gowns and grim life below decks to life in full color, to dramatic affect.

A Passage to India by E.M. Forster

A dangerous voyage, a luckless romance, a clash of cultures — E.M. Forster's modern classic A Passage to India manages to transform the fundamental elements of the Titanic's appeal into something altogether different. Equal parts exotic allure and troubled love story, A Passage to India may be a great way to explore similiar themes from the Titanic in a new way, without straying too far from those beloved decks.

Voyage of the Iceberg by Richard Brown

For readers with a naturalist bent, or anyone interested in the untold story of one of maritime history's most visible voyages, Richard Brown's story of the iceberg that struck the ship is absolutely not to be missed. If you thought the story of ice moving through water would be boring, think again.

For all the Twilight fans out there who may find themselves besotted by the glamour and jazz age elegance of the great ocean liner, but looking for a little something more story-wise, Matt Forbeck's Carpathia merges the grand tragedy of the Titanic with the captivating call of the vampire. If you're looking for an original take on one of the world's most famous shipwrecks, you'll find it within the pages of Carpathia.

Without focusing on the Titanic specifically, Middlesex dives right into the dire consequences of a shipboard romance and the haunting mark a deep sea voyage can leave on so many lives. Dark, curious, and deeply empathetic, Eugenides' Pulitzer Prize-winning novel takes the question of what comes after the the ship docks to an entirely new level.

And the Band Played On by Christopher Ward

An exceptional book of historical nonfiction written by Christopher Ward, And the Band Played On is not only an artful exploration of the night the ship sunk, but also a deeply personal investigation into a compelling piece of family lore. Ward's own grandfather, the 21-year-old violinist Jock Hume was playing on the deck of the Titanic as the great ship slowly sunk, making this particular investigation both deeply personal and broadly compelling.