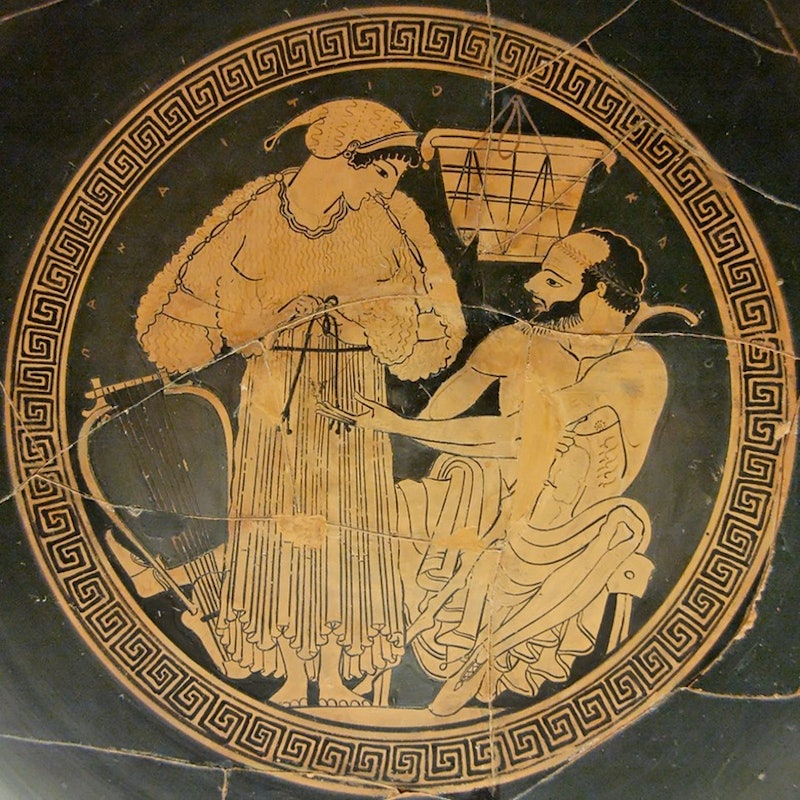 Ladies in today's world who are having difficulty conceiving children face a barrage of judgements and unsolicited advice. "Have you tried IVF? Acupuncture? Relaxing? A private island in the Caribbean with your own personal fertility shaman? It'll happen once you stop worrying about it." It's a wonder any woman who struggles with infertility doesn't automatically incur two murder charges a month. But if that's you this Infertility Awareness Week, this should make you feel better: you're in no way alone, whether now or in the past. Treatment of childless women throughout history may make you feel vaguely grateful that you're dealing with annoying Aunt Agnes, and not a crowd of witch-burners or a physician intent on feeding you pig blood.

Women who can't have kids have had many different names and labels over the centuries. "Barren," the most starkly horrible one, comes from the Middle English word barain , which originally referred to anything that wasn't fruitful: women, animals, plants, landscapes, even thoughts. Infertility in medical texts throughout history has been classified into many types — whether it's the man or woman at fault, whether it's a matter of humors, weight gain, or a "twisted womb," or even just an evil spell. The overall impression, though, is that infertility has often been a frightening and societally damaging experience — and that women usually suffered for it.

In a pre-IVF, pre-feminist world, where motherhood and the ability to carry sons often proved a woman's worth, childlessness was challenging and dangerous — for everybody involved. So nowadays, if you're struggling to get pregnant, give a thought to the women in the past who've shared your fight. You're all part of the same surreal, difficult club.

We know how the ancient Egyptians tried to deal with infertility through some of their medical papyruses. The Kahun Gynaecological Papyrus has several (now, unhappily, mangled) ways to "test" a woman's fertility, including experiments that involve the subject sitting on the earth covered in beer, being force-fed dates and being monitored to see if she vomited. If she somehow managed to keep it all down? Sorry, she was never going to have any kids.

The ancient Egyptians' slightly odd relationship with infertile women is shown by their goddess of infertility: Nephthys, wife and sister of the equally sterile god Set. Nephthys was a highly important goddess, but also faintly terrifying – she was represented by a falcon or vulture (which Egyptians thought were sterile, spontaneously appearing out of thin air), and was also the goddess of funerals and certain dangerous rites of the Afterlife. Infertile Egyptian women clearly had kind of an uneasy time.

Ancient Indian childless women appeared not to have a good life either. One of the earliest Vedic texts reads: "O woe is the woman who does not carry out the provided role of a mother [birth of sons]. O woe the unmarried, woe the childless, woe the mother of daughters, the widow." Women who couldn't get pregnant were viewed as "possessed by Nirrti," a particularly ferocious goddess, and could be cast away out of the family unit.

Ancient China appears to have been one of the only societies to deal with infertile women in a way that didn't make them outcasts: through the introduction of concubines. If a wife couldn't bear children, concubines took on the duties instead.

Ancient Rome and Greece didn't treat women struggling with fertility with much respect. In Rome, a woman's inability to bear children was legitimate grounds for divorce, and could leave her whacked by a bit of bloody goat-skin. At the festival of Lupercalia on February 15, goats and a dog were sacrificed, and then two priests cut out bits of skin from the dead animals and ran around the Palatine Hill in Rome, hitting any women they found. A blow was meant to make you bear children. Cheerful, right?

But it was the Greeks who had the most profound (and ridiculous) medical thoughts on infertility. Hippocrates, the famous physician who founded the Hippocratic Oath, blamed all kinds of things in a woman's body for preventing her from conceiving. He pointed the finger at weight ("unnaturally fat" women couldn't conceive because "the fat compresses the mouth of the womb"), the cervix being too tightly closed, and a terrible idea called "menstrual retention," where your period somehow sloshed around inside your body instead of leaking out sensibly.

He had some interesting ideas for helping women out — dilating women with "hollow leaden probes," for instance, and making them sufficiently thin with purgatives — but the main point you get from Hippocratic texts is this: pregnancy is how a woman stays healthy. If she can't, she'll be weakened for life, and we all need to cover her in pessaries, cumin, resins, and pity until she can birth a baby. This is probably (and depressingly) a pretty normal attitude for the time.

Women who suffered from infertility in the medieval period and Middle Ages had a hell of a time — often literally. The Malleus Maleficarum (1487) by Heinrich Kramer and James Sprenger, a vastly popular witch-hunting book from Germany, claimed that infertility could be caused by both witches and the Devil. Neither harmed the reproductive organs ... they just made them useless, poisoned the seed, or cooled the ardor between man and wife.

And if you weren't annoyed enough by people telling you to blame your womb on the Devil, childless, unmarried or widowed women were sometimes regarded as witches themselves. Deeply unhelpful.

If it wasn't witches, though, it was almost definitely the woman's fault. "Wandering womb" was one suggested cause (medieval concepts of the body included the womb being able to run around inside the body at will), as was "suffocation of the uterus," a hangover from the ancient Greek idea of menstrual retention. An Italian woman from the 11th century who wrote several books on women's health, Trotula de Ruggiero, blamed the "softness" of women's wombs, suggesting they might be too soft or wet to actually catch any sperm floating past. You could tell if a woman had a wet womb if she were "continually tearful."

If you didn't end up being burned at the stake or exorcized, the so-called "cures" were highly unpleasant, and testament to just how desperate the situation must have seemed. Women drank the urine and blood of pregnant animals and ate everything from powdered boar penis to the hind paws of weasels.

In the Middle Ages, things started getting a little less gendered. Men were beginning to be acceptable culprits for a failure to produce a child. How can we tell? From tests like this, from the 1400s:

Take two new earthen pots, each by itself; and let the woman make water in the one, and the man in the other; and put in each of them a quantity of wheat-bran, and not too much, that it be not thick, but be liquid or running; and mark well the pots for identification, and let them stand ten days and ten nights, and thou shalt see in the water that is in default small live worms; and if there appear no worms in either water, then they be likely to have children in process of time when God will.

But infertility had attained, by this point, a very strong religious association too. It was seen as a punishment by the Christian God for sins committed by either partner. Childless women in the Bible, like Hannah, were greeted with either God's mercy or his wrath. And while there were methods of trying to get around it through holy means — praying (particularly to St Anne, the patron saint of childless couples), fasting, taking holy waters — infertility was still seen as a stain not only on a marriage, but on a woman's fundamental moral character.

By the time the early modern period rolled around in England, it had become a full-blown character flaw: the infertile woman, in satires of the period, is sexually promiscuous, masculine and seriously bossy, instead of meek and womanly. Infertility was seen as possibly hereditary (weirdly enough), and sterile women were often used as the butt of bawdy jokes.

Pity poor women like Catherine de Medici. Her marriage to King Henry II of France produced no children, and, even though Henry II was known to have a "malformed" penis, it was still deemed to be all Catherine's fault. She's known to have done virtually everything, from consulting astrologers to refusing to sit on mules (who were sterile in myth) to get herself pregnant, all for naught.

But the tide had turned in favor of men being just as vulnerable as women to infertility issues. Famous diarist Samuel Pepys, in England in 1664, asked advice from his friends on how to solve his marriage's continual childlessness, and got a host of advice on his own conduct, including "do not hug my wife too hard nor too much," "drink juice of sage," and "keep stomach warm and cool." Unfortunately, Pepys and his wife never managed to succeed.

Medical authors like Philip Barrough and Rodrigo de Castro Lusitano talked freely about male infertility as well as female, and the language had become much less morally accusing, and much more medical — though perhaps not entirely accurate. Barrough, for instance, said that men wouldn't have kids if their sperm was too hot or too "cold, thin, watery and feeble," if their penises were too short ("so that they cannot cast their seed into the innermost place"), or if they had a "naughty or evil kind of diet."

Of course, it was women who came in for the most scrutiny, though. Barrough gave a whole host of reasons why women might not be able to conceive — too fat, too thin, womb too hot, womb too cold, womb too "foul, filthy and dry" (yuck), womb too "weak or straight or short". But mostly, it was just body-policing: like Hippocrates before him, Barough said that infertile women were to blame for their own problems if they had a "foolish and uncomely shape" — for your reference, that was any body that didn't have big boobs, butt, belly, and stomach.

As it became less of a moral issue and more pathological, though, dangers were in store: Richard Napier, the famous physician and astrologer of the early 1600s in England, described infertility as a cause of "mental disturbance" in his female patients.

Infertility was beginning to be better understood in these centuries. William Smellie was the first person to describe the fertilization process in detail, in 1752, and things seemed to be getting better, particularly in colonial America. In 1711, a reverend named Benjamin Coleman published a book in which he wrote "Never may we write her Barren who is fruitful in good works," and childlessness was seen as sad but not morally terrible or a scar on the woman's reputation.

However, the infertile woman was still seen as "broken" even as medical understanding crept forward. By the 1800s, infertility was thought to be "a mechanical problem" caused by "disorders of the cervix or malposition of the uterus." But women were still meant to be delicate, fragile creatures who couldn't even exercise for fear of doing themselves and their wombs some damage: in 1898 a prominent German physician said that "violent movement" was out of the question, as it could loosen the uterus,"thus defeating a woman’s true purpose in life, i.e., the bringing forth of strong children."

It was a common attitude. In 1861 the Southern aristocrat Mary Chestnut lamented that her husband had told his mother — a woman who had 27 grandchildren — "You have not been a useless woman in this world."

"Women have such a contempt for a childless wife," Chestnut wrote sadly in her diary. Sadly, even the fact that the diary went on to win the Pulitzer Prize may not have helped.