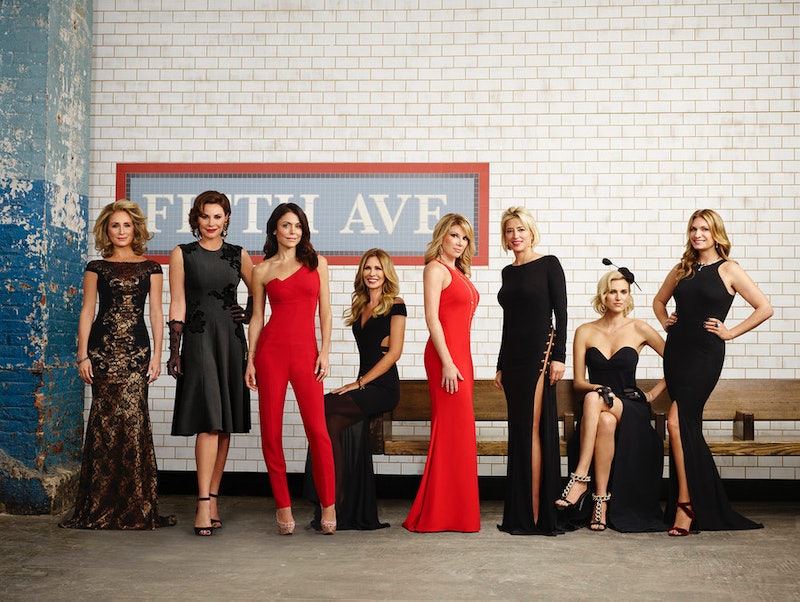 With another chapter of arguably the best Real Housewives franchise beginning, we, as a nation, find ourselves mixed up into the lavish and luxuries lives of the women of New York City. If you love the women as much as I do, you may wonder how exactly they afford the luxuries they enjoy, or just how high the net worths of the Real Housewives of New York really are. How does Sonja afford her Upper East Side home? How much did Bethenny really make from that SkinnyGirl deal?

The ladies of NY are not only rich with drama, but they're also just rich. Before even talking numbers, living in New York City is no easy feat, so the fact they can afford to live in Manhattan and look good doing it says a lot. But these women aren't just getting by in New York City. They're eating at the best places, shopping in the finest stores, throwing legs at the fanciest restaurants... So how much money do each of these women have? And who comes out on top? Let's look at the ranking of net worths of The Real Housewives of New York according to their estimations on Celebrity Net Worth (which is by no means the official number of what the women are worth), and their other business ventures that have gotten them to the point of Real Housewives status.

Carole clocks in with the highest net worth according to Celebrity Net Worths. Carole is an award-winning author (see: What Remains) and a very well-respected journalist. She started her journalism career as an unpaid worker on 20/20 and worked her way up to production jobs on news shows. She has won Emmys for her work overseas and a Peabody. At ABC News, Carole met her late husband, Prince Anthony Radziwill (in 1994). He was apart of the Polish Royal Family, which I assume comes with a hefty bank account, too. Carole has written many best-sellers (What Remains, A Widow's Guide To Sex and Dating), which have surely raked in a pretty penny.

Bethenny is probably the most known housewife when it comes to earnings, but when we first met her on the show on the first season, she was a long way from what she is now. Bethenny sold the cocktail line SkinnyGirl in 2011 for a reported $100 million, and it is reported that she personally saw $55 million of that (according to Forbes), so the Celebrity Net Worth might be a low number. Bethenny has evolved her cocktail brand into an entire lifestyle brand, so she is seeing money come from shapewear, snacks, books, so many ventures. She also had a talk show for a hot second, so that surely padded her wallet, too.

The newest housewife ties for third/fourth highest net worth. Dorinda Medley started out in fashion, starting her own cashmere company — DCL Cashmere — when she was younger. She reportedly had very high profile clients in London, but sold the company when she moved to New York. In New York, Dorinda met and married her late husband Richard Medley (while she was a real estate broker), and Medley was probably a very wealthy man, since he was a hedge fund advisor at George Soros.

Kristen ties with Dorinda in terms of their estimated net worth. Kristen's husband, Josh, has made a lot of money from eBoost, which we saw Kristen model for last season. Kristen was a model as young as 14-years-old. She did editorial work for magazines like Glamour and national campaigns for brands like L’Oréal. Something I didn't know Kristen was involved in was her own greeting card business, 2nd Street Press, and a nail polish line (with Josh) called Pop Of Color coming to stores soon.

In Season 1, Ramona told us how she likes making her own money, because according to her, it is an "aphrodisiac." And, for lack of a better phrase, Ramona has really put her money where her mouth is. Ramona owns RMS Fashions, she is the creator of Tru Renewal skin line and Ramona Singer Jewelry for HSN, founder of True Faith Jewelry and Ramona Singer Collection on Amazon, and of course the Ramona Pinot Grigio. In the first season, Ramona said how important it was for her to make her own money so she could be independent no matter what happened in her future, and now that her and Mario are divorced, I think she'll be doing just fine.

Heather Thomson also started her own company, which we've seen featured on the show multiple times. Heather owns Yummie Tummie by Heather Thomson, a very popular shapewear line. According to Celebrity Net Worth, Heather's net worth clocks in at $10 million, but that also includes the money Heather earned before RHONY and Yummie Tummie, when she was a stylist and designer. Supposedly, Heather worked with people like P Diddy, J.Lo, and... BEYONCE.

The Countess has also is estimated to be worth $2 million via Celebrity Net Worth. She was married to Count Alexandre de Lesseps, who is reportedly worth $50 million, but they divorced in the recent years. Before marrying The Count, LuAnn was a licensed nurse and a model, and of course the money LuAnn has rolling in from her music career ("Money Can't Buy You Class").

Sonja's net worth is really up in the air, since she is still figuring out those financial problems we've sort of seen her deal with over the course of the last and current season. In 2010, Sonja filed for bankruptcy, saying she was $19.8 million in debt. In 2014, she sold her home in France for $5.7 million, and she still has her New York home — which I'm sure is worth a nice chunk of change — but that still leaves me wondering about the $7 million judgement she received for a movie she was supposed to produce through her production company.

Sonja was married to an heir of J.P. Morgan, and he allegedly owes her money from the divorce, which would give Sonja a little extra money. Sonja always talks about her many business ventures, but I'm not sure how many of them are actually successful (see: toaster oven).