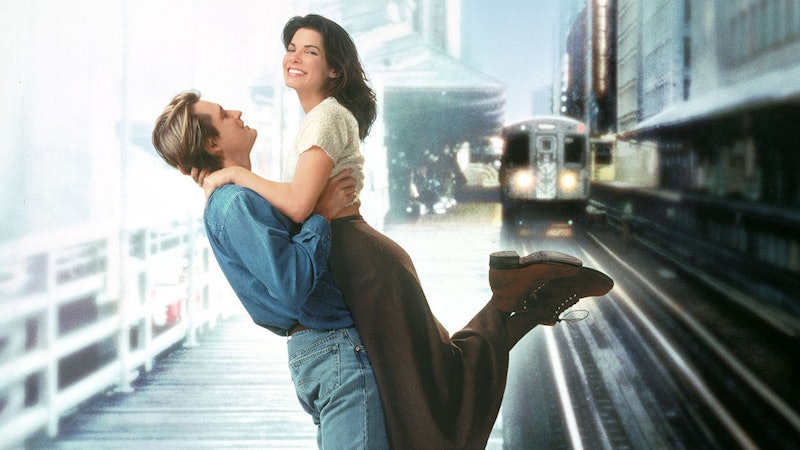 It might be seen as the movie with somewhat of a creepy title and plot line, but how can you pass up a movie starring Sandra Bullock and Bill Pullman? That's right, I'm talking about the 1995 romantic comedy While You Were Sleeping . Now, you might've been sleeping when the movie was released or maybe you were sleeping because you had no interest or maybe you were sleeping because you weren't born yet, but whatever the case, it is While You Were Sleeping 's 20th anniversary. You know what that means? It's time to talk movie trivia about one of the most popular films about a woman who falls in love with a man (that is, until she meets his very much awake brother) in a coma.

For some, the story of a woman falling in love with a man she's never spoken to and then pretends she his fiancé after he enters a coma might be a bit odd, but I'm not going to lie, I love the movie. What's not to love? You have Sandra Bullock and Bill Pullman as main love interests. You have the Callahans, aka a hilarious close-knit family. You have the intriguing Joe Jr. Plus, it makes for a great Christmas movie! I don't know why you wouldn't want to watch it.

If you consider yourself a true While You Were Sleeping fan, then I'm sure you know all the trivia there is about the movie. However, if you don't, then here are seven things you might not have known about the rom-com that may or may not put you to sleep.

Many Famous Actresses Were Considered For Lucy

Before Bullock scored the role of subway worker Lucy, several famous actress were considered for the role. It seems the role was actually written for Demi Moore, while Julia Roberts turned down the role, and even Nicole Kidman auditioned. Apparently, Geena Davis and Jami Gertz were also considered.

Many Famous Actors Were Considered For Jack

Like the role of Lucy, Jack almost wasn't played by Bill Pullman. It seems that James Spader, Dylan McDermott, and Harrison Ford, were all considered. Also, Matthew McConaughey tested for Jack, but his thick Texas accent seemingly got in the way. Lastly, it's reported that the director, Jon Turteltaub, rejected Russell Crowe for the part.

It Scored A Golden Globe Nom

That's right, make fun of the rom-com all you want, but Bullock earned a Golden Globe nomination for Best Performance by an Actress in a Motion Picture, Comedy/Musical. She might have lost to Nicole Kidman for To Die For (who, funnily enough, was auditioned for the same part), but, hey, her acting was pretty spot-on.

Remember Peter and Jack's grandmother Elsie? You might also recognize her as Mrs. Banks from Disney's Mary Poppins. Yep, that is actress Glynis Johns. Oh, and, above, that's also Peter Boyle from Everybody Loves Raymond and the talented Jack Warden.

The Storyline Was Almost Very Different

According to IMDb, the movie wasn't always about a man in a coma. Reportedly, the original screenplay focused on a woman in a coma and a man pretending to be her fiancé. Apparently, studio execs thought the original storyline was "too predatory," so they reversed the roles.

That Paper Boy Scene Was A Happy Accident

Can we all agree this is the greatest scene from the movie? Talk about a fantastic transition. It's shown the morning after Lucy spends the night at the Callahans. Apparently, the actor playing the newspaper boy was supposed to "successfully" throw three papers before we see Lucy wake up, but he fell off his bike and broke his wrist. Turteltaub decided to keep it for the final film version — and we all thank him for it.

Now, if you'll excuse me, I have some While You Were Sleeping to watch.