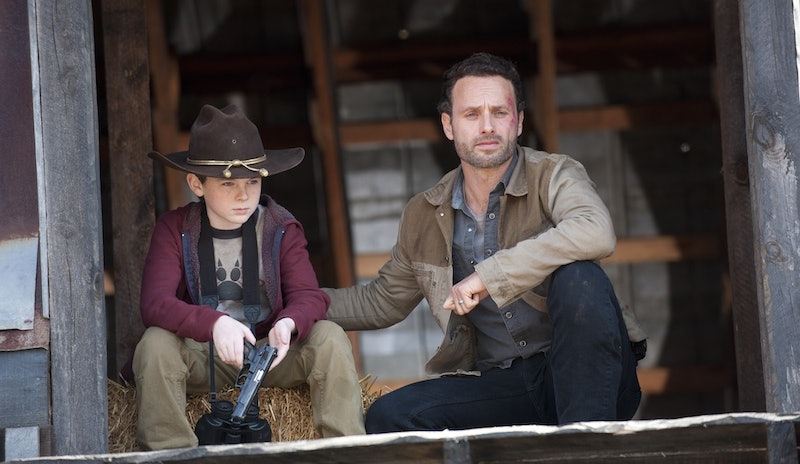 It sounds weird, but shortly after watching the Season 4 premiere of The Walking Dead , I found myself thinking about what it would be like to go through puberty during a zombie apocalypse. Getting through those awkward preteen years is hard enough without having to learn how to shoot through the skulls of undead assailants while you're a hormonal wreck, and I highly doubt that anyone's going to be looking for some Clean & Clear acne wash while they're looting grocery stores and pharmacies. The adults on the series, at the very least, all had a chance to live through their youth under normal conditions, but for the younger kids like Carl, baby Judith, and even the slightly older Beth, their futures are pretty much ruined — even if everyone is able to take their world back, the next generation is going to be pretty mentally screwed up, and probably unable to do basic math. It was about then that I realized: Wait. These people have no chance.

No one is going to survive this — not the adults, not the next generation, not their children (should they choose to have any) — because, as it is right now, it's impossible. One of the biggest reveals earlier in the series was the fact that the zombie virus was not only transmitted by zombie bites, but it was also transmitted by air meaning that everyone, including Rick and co., are infected. Once they die, even if it's of old age, they're destined to turn into the very thing they've spend the latter half of their life killing: A walker.

And so the vicious cycle of zombie outbreaks will continue until humanity has completely died out, and only walkers are left to stumble around until they've all decomposed as well.

Knowing this, it's pretty astonishing that anyone has even continued to fight for survival. If I, as a viewer, am wondering what the point of it all is, surely they must be too? Are they holding on to some hope that, perhaps, a cure will be found? No one's working on a cure (as far as they and we as the audience know), and everyone at the CDC who could potentially develop something is dead — so, that's pretty much considered out. Even if humanity was able to extinguish every single zombie (an impossible task, really), and begin to rebuild their world, zombies would just begin repopulating the Earth once people begun dying of illness and old age. We saw what happened when people attempted to rebuilt a town post-apocalypse with Woodbury, and the prison is hardly a model for an ideal living situation. No one can get out of this okay.

For everyone right now, every day for them is just a constant battle to ensure they don't become zombie chow, and that's it. We've seen relationships flourish and survive (Glenn and Maggie, who are adorable), but we've also seen them come to bloody ends time and time again. What incentive do they have to live that way, and what incentive do we have to continue to watch them do so?

I'm not suggesting that just because there's no endgame in sight here that it's worth tuning out — the series is consistently great week in and week out, and shows are supposed to keep you guessing until the end for the suspense. But it is worth asking what needs to change in order for us to understand why these people go on fighting every day when, like Andrea was saying in the first season, there's no point to life anymore.

The Walking Dead has always been a show about showcasing what extreme circumstances — in this case, a zombie attack — can push people to do in order to protect their loved ones, but if everyone's just doomed to become a zombie when they die, aren't they all just dead already?