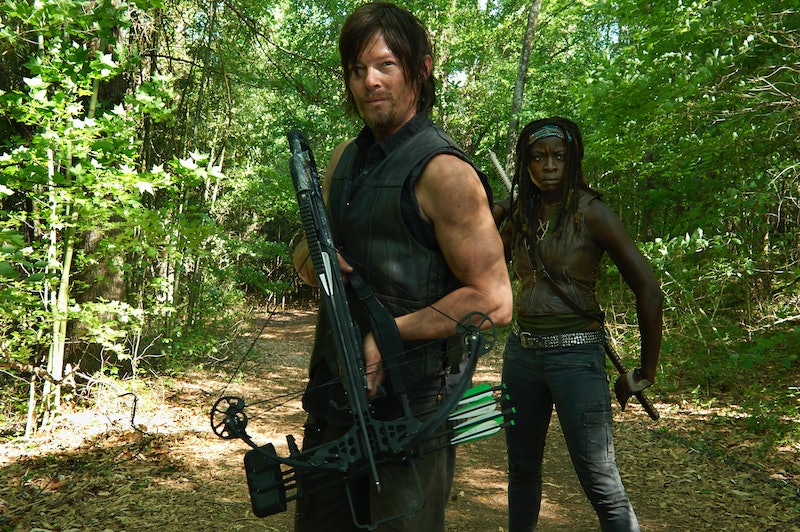 Braiiiiiiiins. The Walking Dead is back for Season 4, but before we get started, some burning questions: Will Rick finally be more likable than Daryl? Is Carl really as f*cked up as we think? Will this season make up for the lack of Breaking Bad? We're gonna go with no, yes, and, probably not, but hopes are high! So let's get started with "30 Days Without An Accident" (hint hint, that's about to change). It's been awhile since we last checked in with the prison and things are going swimmingly. Farming is flourishing (except for a piggy named Violet) and there's lots of love in the air (Tyreese + Karen, Glen + Maggie [who may be pregnant!], and Beth + Zack). "It's like a damn romance novel," Daryl says.

Speaking of Daryl, he's as dreamy as ever (does his hair look different?) and getting attention from everyone in the prison (because, of course). Even Carol is calling him "Pookie."

But wait, who's this? IT'S D'ANGELO BARKSDALE BACK FROM THE DEAD. Yissssss. Yep, Larry Gilliard, Jr. is back on the small screen, this time playing a shifty ex-army medic named Bob. Sidenote: How in the world is this guy 42? Looks like he hasn't aged a day since the glory that is The Wire graced our TV sets.

Anyway, back to the episode, which basically takes place in three parts, each more f*cked up than the last.

All of our favorites (Daryl, Michonne, Glen) and a bunch of newbies we don't care about (Zack, Bob, Tyreese, and his sister) go on a supply run to a supermarket, and, as expected, not everything is puppies and rainbows. Shifty medic Bob finds the wine section and stares at one bottle with a little too much "My Precious" in his eyes than I'm comfortable with. He puts it back, but the whole shelf topples over kinda like this:

Anyway, that startles all the walkers on the roof, who fall through the ceiling and into the store. Uh oh, shit's about to get real. The store is now overrun with walkers, a helicopter is minutes away from falling through the roof, and Bob is still stuck under the shelf. TL;DR — they're able to rescue Bob just as the helicopter comes crashing down, but someone else isn't so lucky. A walker grabs Beth's bf Zack, chomps on his leg and then his neck, and that's it for him. Bye Zack, we hardly knew ye!

BACK AT THE PRISON...

Carl is trying to take charge, but not even the other kids will listen to him. (Don't they know who he is?) The kiddies are chatting with the walkers on the other side of the fence like it's NBD. But Carl doesn't like that they've given names to the walkers. "They don't talk. They don't think. They eat people. They kill people," Carl says.

"People kill people. They still have names," a girl retorts. Wow, poignant words from a child. The kids head off to story time. Carl sneaks over to see what that's about, and it turns out Carol is actually teaching the kiddies how to use knives for self-defense. Some older kid named Patrick isn't feeling too well and runs away. Carol begs Carl not to tell his dad, but I guess that's drama for another episode.

I mean, even if he did tell Rick, the guy in charge has way more important things to deal with. Rick heads off into the woods to find some grub. He comes across a hog and a malnourished woman, who is looking ROUGH and has some sort of weird European (Irish?) accent. Anyway, she begs Rick to come back to her camp to meet her hubby Eddie, and Rick agrees to help the couple if they can both answer "three questions." But something's not quite right when he gets there. Weirdo lady has hid something under a tarp and it looks to be Zombie Eddie (hey, she's not the first, amirite?), but before Rick realizes it, she lunges at him with a knife, but he knocks her down. Apparently, she lured Rick there to "feed" Eddie. But before Rick can even get a handling on what in God's name is even happening, she stabs herself in the stomach and begs Rick to "let her be like (a zombie)."

Oh man, Rick can't win, can he? As she's bleeding out, she asks what the three questions were, and he tells her:

Anyway, everyone's back at the prison. The day is winding down, but no one is better off now than they were when the day began. Violet the pig is dead, Maggie isn't pregnant, Michonne is obsessively trying to figure out where the Guv'nor's gone, Daryl tells Beth what happened to Zack ("I don't cry anymore, Daryl"), and Hershel is with Rick and Baby Judith chatting about whatever the F happened to him in the woods.

That's not all, though. Patrick is coughing up a storm and takes a shower, but drops dead mid wash. Wait, WHAT? It's probably an issue when my immediate reaction is, "Why did he die? Can that happen to me?" rather than "Oh, shit, everyone is screwed since Patrick's about to become a walker."

But he does, and yep, everyone is screwed.

Inappropriate inner monologue of the night:

OMG, Carl looks so… much older. Really into that long hair and deeper voice (goes to Wikipedia to check how old Chandler Riggs is… finds out and smacks self in face).

Casting of the night (unrelated to The Wire):

I was wondering why I immediately shuddered the second I saw Zack on screen again. And then it dawned on me… Zack is Beaver and Beaver is Zack (from Veronica Mars, you guys)! Let's face it, no one deserves a ROUGHER death than Beaver.

Runner-Up casting of the night:

Sickly Patrick did the voice of Phineas in the animated show Phineas and Ferb.

Remaining questions of the night:

Is Violet the pig supposed to be a metaphor for something? Why aren't the people concerned that when Violet dies she could turn into a Zombie Pig? OMG, I just came up with Syfy's next big hit. Gotta go, bye!