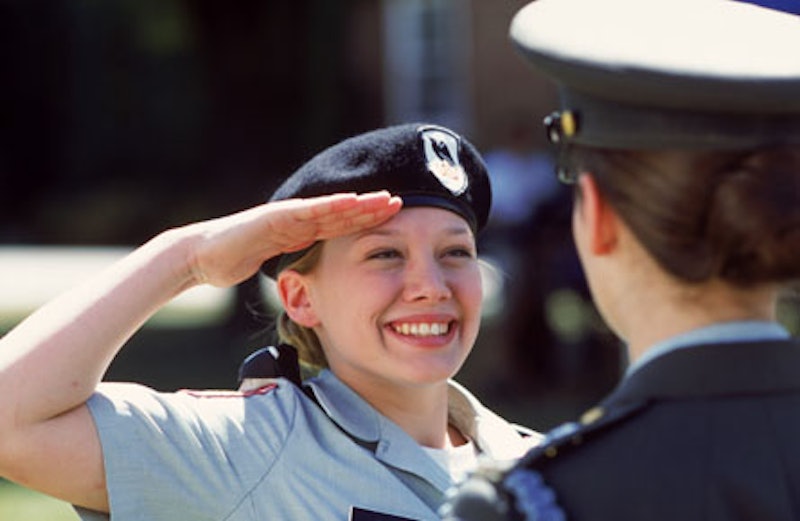 Confession time: Back in the day, I honestly didn't understand the allure of Disney Channel Golden Girl Hilary Duff. It's not anything against Duff herself; I was more about vampire slayers and black lipstick in the early '00s, and Lizzie McGuire simply wasn't my brand of uncool at the time. So that made the 2002 Disney Channel masterpiece Cadet Kelly a first-time watch as this week's bad movie re-watch... with some surprising results.

The story follows Kelly, a free-spirited individualist who listens to the most mainstream pop group in the world, and her transition from art school to military school. Kelly's new stepfather is principal of the school, and hasn't quite warmed up to her yet, so her playful acts of disobedience keep getting her in trouble. With the help of her friend Carla and a spot on the drill team, will Kelly learn about teamwork and discipline? Well...

Out of context Cadet Kelly is... something, to say the least, but it has some redeeming qualities that I have to admit — as in, I think there's some actual good in here. They don't force a romantic relationship, there's no unrealistic makeover of the military and there's legitimate character growth. You can really see how Kelly matures. It's baffling.

Anyway, whatever, it's still a silly piece of work, so here are 21 absurd things from Cadet Kelly that prove you need to re-watch this movie immediately.

Personally I went to New Jersey Middle School for the Learning.

It's one of those gross faux-hair ponytail holders with the little braids that ALL the cool kids were wearing in the early '00s, except purple. Which A, defeats the given purpose of those holders (which was to make it look like your actual hair) and B, looks stupid.

3. "I call it 'Dance of Family,' and I couldn't have choreographed it without my best friend Kelly."

Already found the most horrible child in this film.

Who swiftly falls to his death early in the film.

8. But anyway, it makes none percent sense that Kelly would even live in the dorms with the other students.

Not when her stepfather and mother live on campus. I mean, I guess it makes sense in that military school would insist on following such protocol to promote uniformity and what-have-you, but it doesn't really make sense that they'd like... I don't know, take her from one specialized school (in the arts) and force her to go to another school specifically for disobedient children and teens with military ambitions just because her stepfather is principal there, which only leads to a conflict of interest.

So I guess what I'm actually saying is that the entire plot doesn't make sense.

Yo dude, remember when everyone collected these like Pokemon cards?

10. This is the cutest boy Kelly's ever seen.

That looks a lot like the guy who was secretly a drug dealer on Veronica Mars . (Fun fact: It's actually his twin.)

And she insists she knows what's she's talking about, because she was THIS close to *NSYNC.

12. The lack of security at a military school that allowed this to happen.

And the fact that Kelly gets reprimanded instead of rewarded for her stealth.

14. That one girl power pop song that sounds like off-brand Britney Spears that plays during that montage from Legally Blonde also plays during THIS montage.

Like, when Elle goes to that party dressed as a bunny, and she talks to Warner, and he's like, "You can do something more valuable with your time?" And she storms out all like, "I'll show you how valuable Elle Woods can be!" And then she gets a Macbook?

Do you guys remember that? It's that song.

16. When that obnoxious girl from the start of the movie comes back, and Kelly says she's her best friend, and Carla gets hurt.

Which is ridiculous, because Carla is an exponentially better person by default.

17. Everyone gets pissed at Kelly because she brought her cell phone to the drill team.

18. And then she apologizes to Carla about it.

Who's not even on the drill team.

19. Deadbeat dad nearly DOES fall to his death.

Kelly has to do EVERYTHING.

21. And then they breakdance it out.