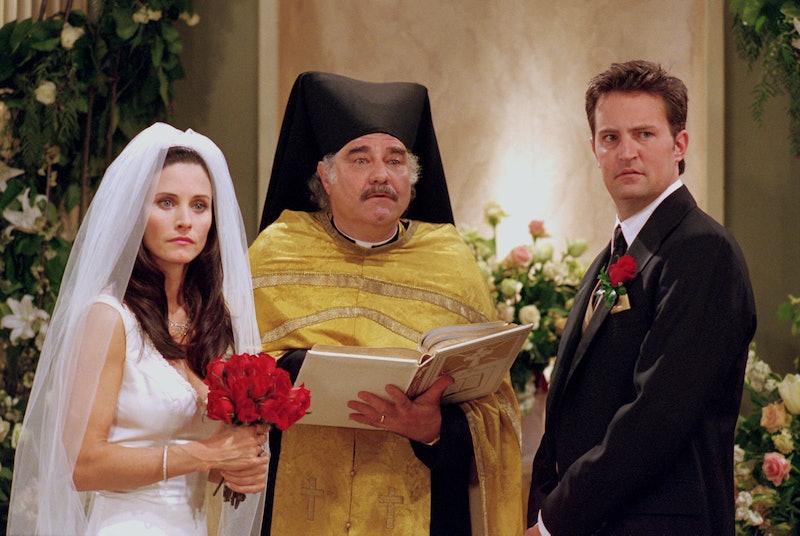 While Ross and Rachel may have been the backbone romance of Friends and a force fueling think-pieces for years to come, it was Monica and Chandler's love story that really portrayed relationships at their most honest. Though the sarcasm machine and cleanliness control freak seemed like an odd match at first, they grew together, building a bond both strong and inspiring. Monica and Chandler's relationship was what made the gang of friends into a family — both figuratively and, in some cases, literally.

What really made Monica and Chandler's relationship special was their motivation to work on their relationship. They didn't let the little things drive them apart or big things stand in their way. And while torrid love affairs are always fun (ahem, Ross), and while kissing a friend always makes it fizzle into something weird (Joey and Rachel found this one out the hard way), Chandler and Monica were exceptional and fueled a positive love story, growing old together in a good way.

So, to honor Friends' best couple ever — and the characters of Monica and Chandler individually, because they were both amazing on their own, as well as together — here are a few reasons why Chandler and Monica were the best 'ship on Friends.

Their love has a pretty great origin story

Sure, it's not the most romantic story in the world: Chandler, with his flock-of-seagulls hair, dared to call a smitten Monica fat. This inspired Monica to lose weight, and to eventually plan a faux seduction in order to humiliate him. Of course, this fails miserably and Monica ends up cutting off Chandler's toe while sensually rubbing it against a knife. It's definitely not the way she planned that revenge fantasy, but a great footnote, nonetheless.

Getting together with your friend can often be a one-way ticket to Awkwardville, and more often than not it ends with miscommunications, hurt feelings, and potentially a ruined group dynamic. These were all risks that came with Monica and Chandler's London hook-up, and every subsequent hook-up afterwards... but they got through it. Being that rare couple that can make it work is proof of a genuine connection. Adorable!

Their romance had an element of surprise, but was always a strong one

Let's face it, there wasn't a multitude of hints leading up to their relationship — in fact, there was a time when we thought Chandler and Janice might be end game. So, putting Chandler and Monica together was a refreshing way to change the plot of the series, and despite early obstacles (keeping their affair a secret, learning to live with each other) there wasn't a lot of on-and-off-again drama once they did get together. It had a natural progression, and it was amazing to see.

SO GOOD. Somebody pass me the tissues.

At the end of the day, they had similar values

This is best exemplified in the Season 8 episode, "The One Where Joey Tells Rachel." The duo is introduced to Phoebe's boyfriend Don, who seems to be Monica's apparent soulmate. He shares Monica's hatred of sun-dried tomatoes and her love of cheese. Although Chandler doesn't believe in soulmates, he has anxieties about Don sweeping Monica off her feet. But, once he shares his worries, Monica assures him that she doesn't believe in soulmates either. "I don't think you and I were destined to end up together," she says. "I think that, we fell in love and work hard at our relationship. Some days we work really hard."

It's both sweet and reassuring that despite the rocky road their relationship started on, they have a similar game plan in mind. Which brings us to the next point...

There's no doubt that Richard loved Monica, and that he was mature, sensitive, intelligent, and really knew how to rock a mustache. Honestly, I get why people would 'ship him and Monica together. But the truth? He made it pretty clear at Barry and Mindy's wedding (and later when he intercepted Chandler's proposal) that having kids with Monica was means to an end — something he'd do to have her, not because he wanted them. That's a clear indication that these two just weren't meant to be.

More importantly, they withstood their struggles of conception, fighting to become parents no matter what

It's so important that Friends had this storyline and tapped into something that was both sad and realistic — something that wouldn't be solved over the span of 22 minutes. In the Season 10 episode "The One With The Birth Mother," Monica and Chandler are being considered as candidates for adoption, and through a mix-up, pregnant teen Erica finds out they're being dishonest about their personas. This leads to Chandler confronting Erica separately and giving the following plea:

My wife's an incredible woman. She's loving and devoted and caring. And don't tell her I said this, but the woman's always right... I love my wife more than anything in this world. It kills me that I can't give her a baby... I really want a kid. And when that day finally comes, I'll learn how to be a good dad. But my wife... she's already there. She's a mother... without a baby... Please?