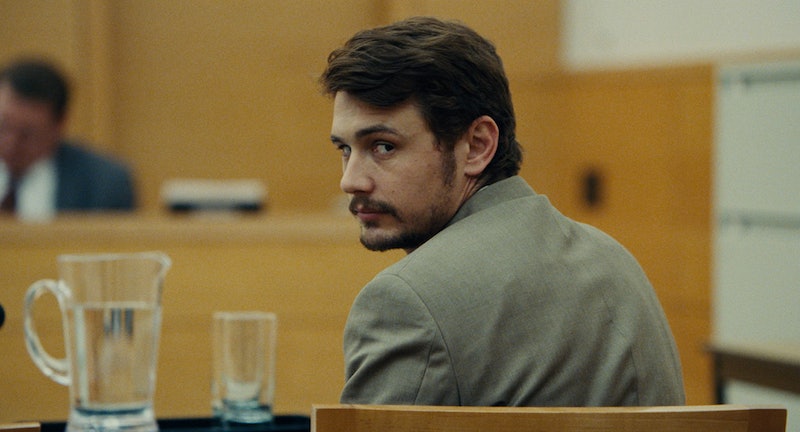 He's infamous at this point, and sadly, it's not for good reason: Christian Longo is the man responsible for the brutal murder of his wife and children in Oregon more than a decade ago. He's also the man that stole the identity of a disgraced New York Times journalist, Michael Finkel, while on the run from authorities. The story of this disturbed man and the writer he wooed his tale of tragedy has been fictionalized for the big screen in the upcoming movie True Story, which leads me to wonder — whatever happened to this murderous man? Where is Christian Longo now?

If you're not familiar with the story: After standing trial in Oregon for the murder of his wife, MaryJane (maiden name Baker), and children, Zachery, Sadie and Madison, Longo was sentenced to death by lethal injection on April 16, 2003. Now 41 years old, he is currently carrying out the judgement on death row at the Oregon State Penitentiary in Salem. No date has currently been set of his execution.

James Franco portrays Longo in True Story, the film about the murders and the trial — but primarily about his interaction with Finkel, who is played by Jonah Hill. As the story goes, Longo killed his family in December of 2001 and dumped their bodies on the coast. He escaped to Mexico, where he was living under the name Michael Finkel, and the FBI placed him on their Most Wanted list. He was eventually apprehended after a women he met recognized him from his photo on FBI's Most Wanted.

So what has Longo been doing with the time he has left since the trial? It's complicated.

In 2014, he wrote an email (yes, an email) to The Oregonian, a newspaper, to express his opinions on "murderabilia," the online sale of murderers' mementos. Someone wrote him a supportive letter, but when Longo mailed a response back, this person then sold his letter for a profit of $40.

That's not all, either: Back in 2009, Longo decided to try and make the most out of his execution, he revealed he wanted to donate his organs. He was even willing to give up all of his appeals, but he was continuously denied. So, he came to establish Gifts of Anatomical Value from Everyone (G.A.V.E.): The organization attempts to allow those on death row, and other groups who are barred from donating their organs to do so in the hopes of reducing the waiting list on organ transplants. As Finkel wrote in an article for Esquire, this project gave him new life. Once content to forgo his appeals, he began to actively pursue them again in order to spend more time on building up G.A.V.E. and, in the process, "likely putting off his execution date by at least a decade."

Surprisingly, the man whose identity Longo stole, Finkel, told The New York Times in a recent article on True Story that the two maintain contact. "He calls me the first Sunday of every month. There’s always this internal tug of war over whether I should pick up the phone or not, but I usually do."

The film hits theaters this weekend, starting on April 17. Though liberties were taken with the true events, it aims to capture the emotional response from Finkel and the psychological turmoil that played out listening to the real-life Longo.

More like this
A New Netflix Doc Will Explore The Unsolved Murder Of Jill Dando
By Sam Ramsden
This First Look At 'The Gold' Shows Jack Lowden In A Whole New Light
By El Hunt and Sam Ramsden
A Teen Murder Victim's Horrific Diary Entry Helped Police Find Her Killer
By Brad Witter
12 Years Ago, Austin Butler Manifested His Oscar Nom In This Disney Movie Scene
By Jake Viswanath
Get Even More From Bustle — Sign Up For The Newsletter