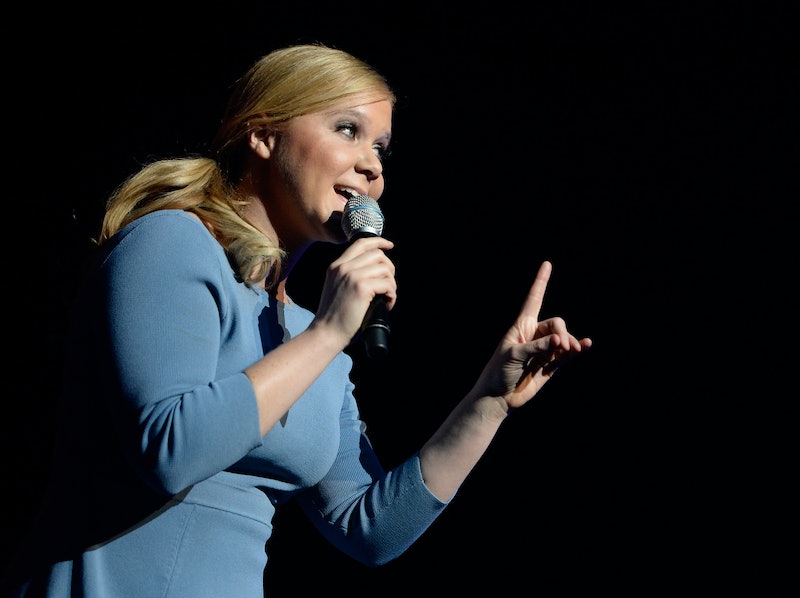 Comedy Central used to be a network just for dudes. But When Amy Schumer's Inside Amy Schumer premiered on the bro-tastic network, it scored higher ratings than the network’s two other male-led premiere shows, the Jeselnik Offensive and Kroll Show. According to a New York Times article, the network's audience is 60% male. But with Schumer and the lovely ladies of Broad City crushing ratings, this is surely shifting. There's no denying that Schumer is one of the funniest voices — female or otherwise — in the business. Not only does she make us keel over with laughter from sketches like, "A Chick Who Can Hang," and "A Very Realistic Military Game," Schumer uses her power as a confident female comedian to spread the good feminist word.

Her comedy is raunchy and real. She crafts jokes around topics around her own body image, sex with strangers, and even abortion. But her voice is unique, powerful, and undeniably female. Her jokes offer an alternate viewpoint to the nth male comedian and his male-centric comedy. For a generation of women coming of age today, Schumer offers a hilarious — and real — guide to life and love as a woman of 2015. Here are five reasons why Amy Schumer is a feminist icon.

She Realizes Female Oppression & Wants To Overcome It

Schumer recognizes her competition for eyeballs, not just at Comedy Central but on the road touring, in her upcoming film Trainwreck, and in life, is hindered because of her gender. In regards to Inside Amy Schumer, she said: “Do I want women to watch and am I sending a message? My instinct is a little bit to whisper ‘yes.’ That doesn’t seem like something you’d have to whisper, but it really is.”

As Daniel Tosh proved, joking about rape is never a good idea. But there might be an exception in Amy Schumer's case. The comedian turned the dreaded rape joke on its head when she defined "grape," exposing the fact that many women have had an experience they might not deem "rape" but still made them uncomfortable. She said:

Most women I know that I'm close to have had a sexual experience that they were really uncomfortable [with]. If it wasn't completely rape, it was something very similar to rape. And so I say it's not all black and white. There's a gray area of rape, and I call it 'grape.' It's the guy you went home with in college, and you said, 'No,' and then he still did it, or maybe you woke up and it was someone you were dating. ...

"There's just so many different things that can happen, so it's not always this, 'Well, you're going to jail and that's it.' There's other stuff where it's like, 'Wow, it would be so much work, and it would be such a life-changer for me to ... press charges or take any action against this person.' But every girl I know has had some experience that is kind of like 'grape.' "

Schumer's comedy, brash and absurdist, helps male audiences realize what it's like to be a woman by utilizing typical female stereotypes and turning them on their heads. For example, one sketch, "Lunch at O'Nutters" is a parody on Hooters restaurants, complete with flirtatious males in form-fitting spandex underwear. There's even a "wet nut" contest.

By turning these gendered scenarios on their heads, she calls to question the absolute absurdity of the female circumstance. If it's completely laughable with a male at O'Nutters, how is the sexualized female at Hooters any different?

Through her series, she parodies extreme dieting and workout routings, like Slap Chef, a program where "one of slap chef’s world class chefs makes you one of their signature dishes, then before you can say ‘slap chef’ they knock it out of your stupid mouth."

There's also Sleep Gym, a gym where you are literally knocked unconscious during your workout — to take all the hard work out of the equation! These sketches help us realize how much pressure women face in the eyes of media and society when it comes to our physical appearance.

She Utilizes Her Platform To Raise Other Women Up

Schumer's Gloria Awards and Gala speech is jaw-droppingly powerful. You can read the whole thing here. In one of the speech's most beautiful moments, Schumer reminds us that love is self-given. She said: "I am a woman with thoughts and questions and shit to say. I say if I'm beautiful. I say if I'm strong. You will not determine my story — I will. I will speak and share and fuck and love and I will never apologize to the frightened millions who resent that they never had it in them to do it. I stand here and I am amazing, for you. Not because of you. I am not who I sleep with. I am not my weight. I am not my mother. I am myself. And I am all of you, and I thank you."

You can catch Season 3 of Inside Amy Schumer starting April 21 on Comedy Central.

More like this
What Does The Presley Family Think Of 'Elvis'?
By Arya Roshanian
Adele’s All-Female Lineup Includes Kacey Musgraves, Mahalia, & Self Esteem
By Shahed Ezaydi
Why You Loved 'One Tree Hill' So Much — And Still Do
By Sabienna Bowman and Radhika Menon
9 Photos Of Margot Robbie & Ryan Gosling As Rollerblading Barbie & Ken
By Alyssa Lapid
Get Even More From Bustle — Sign Up For The Newsletter