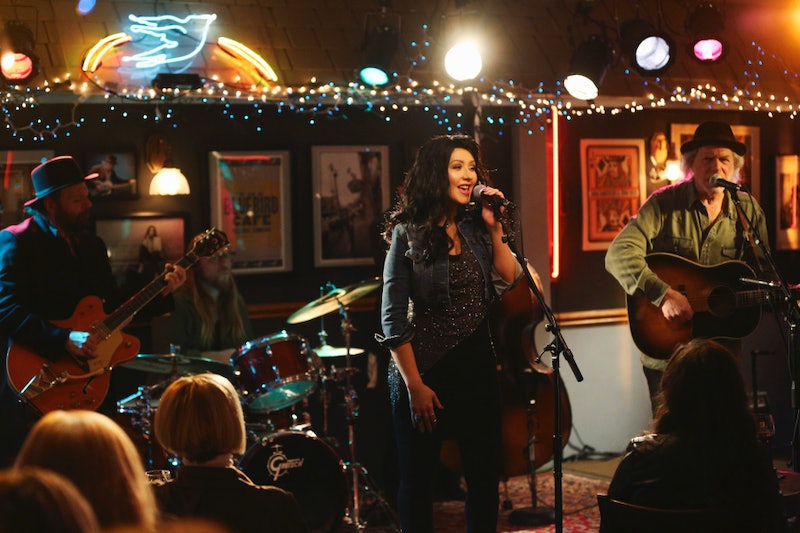 You thought Empire was pulling the biggest guest stars in the music industry? Wait until you see who's coming to Nashville. This Wednesday, Christina Aguilera will play Jade St. John on Nashville, and she has history with everyone's favorite slimeball, Jeff Fordham. How are they involved? Here's what the official ABC press release for Wednesday's episode, "Nobody Knows But Me," reveals.

With the arrival of his former fiancée in Nashville, Jeff finds himself face-to-face with Jade St. John. A powerhouse pop-star in Nashville on tour, Jeff is forced to revisit his past and work with the woman who once played a large role in both his personal and professional lives.

Looking at some of the images from the singer/actress' appearance in Season 3, Jade will also interact with Will Lexington, Luke Wheeler, and even Layla Grant in the upcoming weeks. According to a sneak peek, it's been 10 years since the two former love birds saw one another. In the clip below, they share a champagne toast and Jeff pitches Layla Grant to her as a guest collaborator. Jade then accurately pinpoints Jeff's interest in the young artist. However, in exchange for taking a chance on Layla, Jade wants an introduction to Luke Wheeler. Take a look.

Do you think Jade really only wants to talk business with the "King of Country?" I bet she's going to end up recording the duet that Sadie helped inspire. The second I start shipping Luke with Sadie Stone, they throw me for a loop! Anyway, you can tell that Jade and Jeff were a powerhouse couple by the way they make deals after all this time. I can't wait to see more.

This half of the season has focused on Jeff's womanizing past with clients and business partners alike. Layla got jealous of a woman who Jeff once dated and still got along with during a meeting, but I would've liked to see more of her. We haven't really seen Jeff get involved romantically with anyone but Layla yet. Unless you count his one-night-stand with Juliette, but I'm trying to forget about that for both their sakes.

So if someone that special is coming to Nashville, it's sure to shake up a few things. What was Jeff like 10 years ago? Was he as ruthless as he is today, or did something happen? The story of fame and success changing a musician or an actor is tired at this point. It would be interesting to see that old tale played through with someone behind the scenes in the music industry.

I'm also looking forward to seeing what Aguilera brings musically to the show. The songs on Nashville have taken a more traditional and/or folk rock path lately with Luke, Sadie, and the Triple Exes. However, the show began with Juliette breaking away from pop country to explore her roots and Jade St. John's character is a reverse of that. She reminds Jeff in the sneak peek that he drove her away from country and towards pop. How intriguing! I'd love to see them dip back into that world before Season 3 ends.