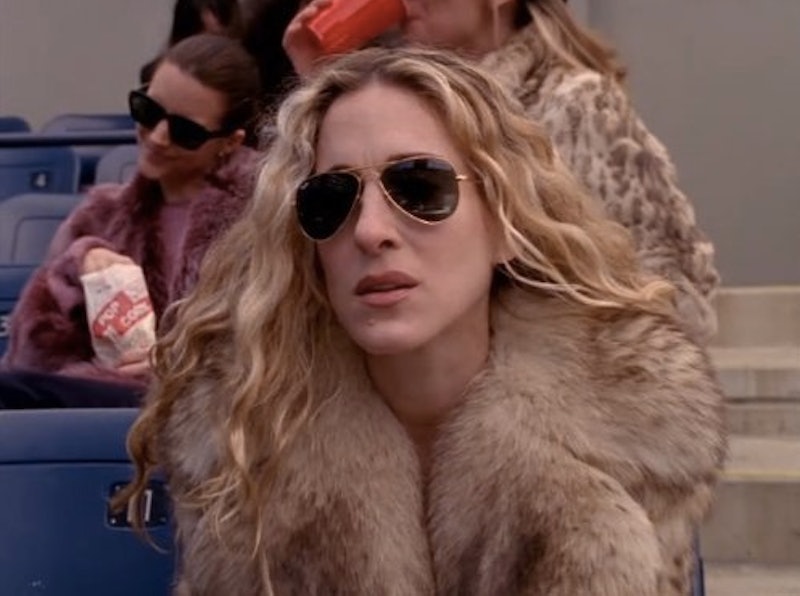 Guys. I have to tell you something. Sex and the City stopped airing episodes 11 years ago, in 2004. That's when it went off the air, so I hesitate to even tell you when it went on. But OK, you twisted my arm, and it's valuable to the post, so I'll tell you: SATC premiered in 1998. This little nugget of pop culture — which we still use as a reference to describe our friends (are you a Carrie or a Samantha?) and which feels like it was around just yesterday — actually began not only in an entirely different decade, but an entirely different century. (I'll stop short of reminding you that it also took place in a different millennium, because I'm pretty sure that might be the death of you, and my god, we have to draw the line somewhere.)

Anyway, this information is easy to lose your grasp of, because in many ways, those four ladies and their love affair with Manhattan have managed to stay impressively relevant over the years. Like I said, we still use their personality traits to label the members of our own friend groups, and if I had a nickel for every time I said "He's just not that into you," I might have a full dollar. Also, no offense to Chris Noth, but he is now and forever will be Mr. Big, and it will never not strike me as odd that he was somehow elected Governor of Illinois on The Good Wife or that he fancies himself a detective on Law and Order.

But as timeless as their sex-positive attitudes are, it turns out that there are some quotes from the show that are actually pretty outdated. The kind of quotes that remind you of all the things that have happened since 1998. (Namely, that you have gotten older and accomplished nothing of note. *SOB*) Here are the 11 most jarring examples.

1. "He has one ball, and I have a lazy ovary! In what twisted world does that create a baby? It's like the Special Olympics of conception." — Miranda

Remember casual jokes about disabilities? 1998 does!

2. "Tim was 42. A well-liked and respected investment banker." — Carrie

3. "I don't want to be the up-the-butt girl, because I mean ... Men don't marry up-the-butt girl. Whoever heard of Mrs. Up-The-Butt? No, no, no. I can't. I want children and nice bedding, and I just can't handle this right now." — Charlotte

4. "I feel the same way about being a bridesmaid as you feel about Botox. Painful and unnecessary." — Samantha

And if there's one thing more popular than butts, it's Botox. Just speaking truth to power here.

5. "I'm not even sure bisexuality exists. I think it's just a layover on the way to Gay Town." — Carrie

Not a lotta rape jokes on TV anymore these days.

Oh, you have an AOL account? Congratulations, you officially can't be taken seriously.

9. "You need a safe approach in case he rejects you. Email him."Carrie: "I'm an old-fashioned gal. I prefer calling and hanging up." — Miranda

Shoutout to the recession for making this line completely impossible!

Ooh may I recommend ... your own home? Pretty sure that's currently the only place you can do both of those things concurrently.