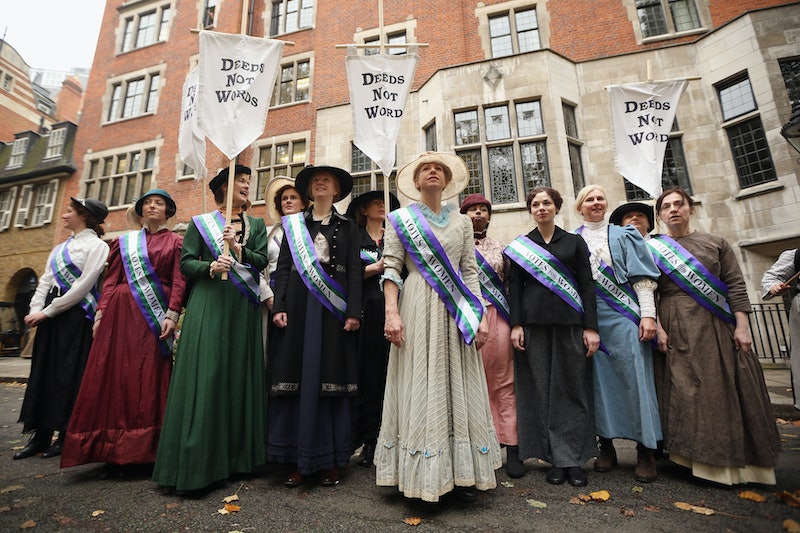 On Wednesday, a new teaser for Meryl Streep and Carey Mulligan's film Suffragette hit the Internet and it looks amazing. Suffragette won't hit the big screen until October 2015, but it is already a groundbreaking film. From its two formidable leading ladies to its female writer and female director to its focus on one of the greatest feminist battles ever fought and won, Suffragette is already unlike any other awards bait movie in the 2015 race (or any past race). The new teaser only confirms the film's uniqueness with its epic, gritty aesthetic.

In a year when women's rights are at the center of political debates once more and Hillary Clinton has become the first serious contender for the Democratic Presidential nomination, Suffragette is poised to be much more than a film— it could become a rallying point for the current women's rights movement.

Its potential importance in the political realm is enough to make Suffragette the most important film of 2015, but it could just as easily be the best. It's not just the actresses attached (although they might as well go ahead and hand Streep her Oscar now); it's the behind the scenes talent, as well. Director Sarah Gavron is not a household name yet, but her style is beautifully dark. Then there is writer Abi Morgan, who created and wrote one of the most feminist TV series in recent memory, the '50s era journalism drama The Hour.

Morgan's intense, almost poetic way with words is on full display in the teaser. We only see a few tantalizing snippets of the film, but what we do see is stirring and emotional in all the right ways. There is nothing cloying about Mulligan staring into a store window filled with dolls as a voiceover asserts, "Women do not have the calmness of temperament, or the balance of mind to exercise judgment in political affairs."

In this particular moment in time when women are once again fighting for the most basic of rights including equal pay and freedom of choice, Suffragette is timely. We must look to the past if woman have any hope of fighting against the current political movements stripping away reproductive rights one state at a time. With Streep attached, Suffragette has the chance to reach a wider audience and the wider the audience, the better chance the film has to reach not only the people who already agree with its message, but those who could benefit from seeing the struggles women have faced to fight for the rights we take for granted.

Even if we remove politics from the equation, Suffragette has all of the makings of a classic film. While women have been making great strides in the world of comedy (see Pitch Perfect, The Heat, Spy...), the world of big screen dramas have slowly become more and more masculine. For every Gone Girl we have three American Snipers. I am hungry for more movies starring and created by women, and Suffragette looks like an amazing first course thanks to Streep, Mulligan, Gavron, and Morgan.