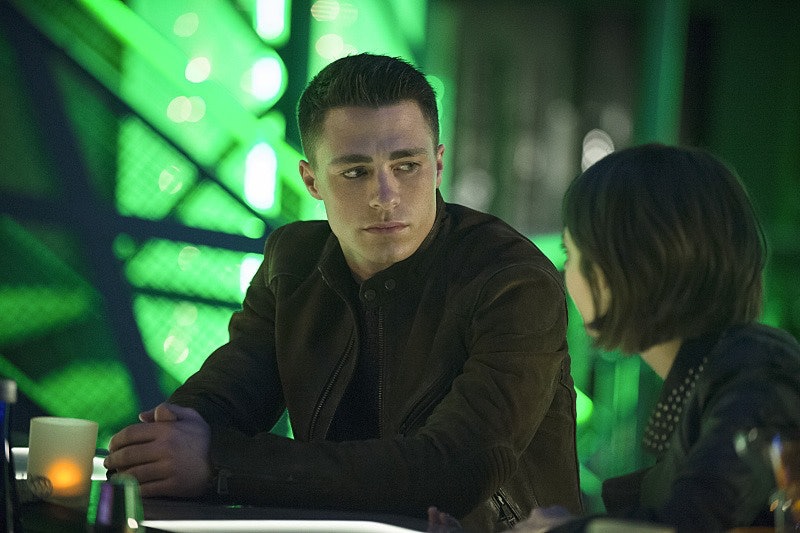 Well, I can now officially say that I've fit every single emotion into one very intense hour of television. Wednesday night's Arrow episode "Broken Arrow" proved to be a rather crazy roller coaster ride in regards to our dear Arsenal's fate. But while many of us out there, myself included, feared that Roy would be killed by the end of Arrow Season 3, that is apparently not how his fate is going to shake out. Roy is alive, but he left Starling City after Diggle and Felicity helped to fake his death. But whether or not he's gone for good still remains unclear.

Granted, the plan itself makes a lot of sense and I'm downright impressed that Team Arrow managed to come up with it without Oliver finding out. First Roy volunteered to be put in jail. Then Diggle just so happened to know a guy who can stab someone in just the right spot, so they won't die. (I mean, who doesn't have one of those guys, ya know?) And then he was given beta blockers to slow his heart rate way down in order to fool the proper police authorities aka Captain Lance.

That's pretty convincing stuff right there. And I'd be lying if I said I wasn't literally screaming at my television when I thought Roy had been killed for real. But now that I know we're still potentially losing Roy as a character, I'm not entirely sure this prospect is much better. Clearly, they can't have a supposed-to-be dead guy roaming the streets of Starling City. I get that. But can't he just go into hiding somewhere in the city without moving away entirely? Does Roy really have to be gone for good? (WHAT ABOUT THEA?!?!)

Given that Colton Haynes has been away on vacation during these final few weeks of filming, I'd say it's safe to assume we won't be seeing much (or any) of him for the rest of the season. But does that mean he's never coming back? Because I am not OK with that. In fact, I'm the opposite of OK with that. We knew the Arrow cast would be saying goodbye to someone this season, however, I always assumed it would be death-related. But could they have been talking about Roy's departure this whole time? I need some answers, Arrow writers. And I need them ASAP.