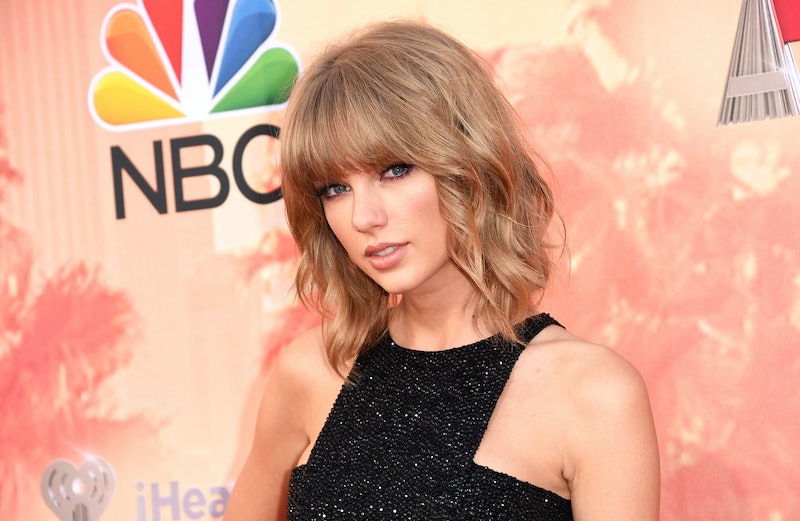 It's not really a surprise, but it's awesome anyway. Taylor Swift made Time 's 100 Most Influential People list for 2015, and although this isn't her first time on the list, her spot is truly deserved. Six months later, I'm still obsessed with 1989, and if that doesn't convince you, everything that Mariska Hargitay wrote about her for Time will. Being that Swift is a big enough Law & Order: SVU fan that she named her cat after Hargitay's character, Olivia Benson, the actress couldn't be a more perfect choice, and her essay is perfect.

Through Hargitay's piece on why Swift deserves to be on Time's list, it really becomes apparent that what her cat's namesake loves most about her is what I love most about her, too: that she shares the hard truths about life in the perfect words. As long as you have one of Swift's albums around, you have someone who understands what you're going through.

In her essay, Hargitay writes:

I’m amazed at how much earned wisdom Taylor threads into her work. She seems tuned in to the greater good, and she embraces — thoughtfully and authentically — the chance to contribute to the world. I’m always trying to find the best words to talk to my kids (and myself) about growing up, but you can’t top her beautifully articulated advice. The haters are gonna hate, but, well, shake it off. She illuminates our inner music that lets us dance to our own beat.

It's true. Swift's words do give the perfect advice when you need them, especially if you're a kid or a teenager and you're still figuring out the way the world works, and especially especially in relationships.

On High School Crushes That Don't Work Out

In your life you'll do things greater than dating the boy on the football team, but I didn't know it at fifteen.

On Dealing With Bullies

There will always be mean people in the world, but you don't have to become one of them just because they treat you poorly. Besides, one day you'll be livin' in a big old city, right? Or whatever your personal equivalent of that dream is.

On Appreciating Your Parents

You're in the car on the way to the moviesAnd you're mortified your mom's dropping you offAt 14 there's just so much you can't doAnd you can't wait to move out someday and call your own shotsBut don't make her drop you off around the blockRemember that she's getting older, tooAnd don't lose the way that you dance around in your PJs getting ready for school

You won't have your parents forever. Even if you feel like you're too cool for them, one day, you'll want those kid years back, so appreciate them. And be nice to them! It's hard to be a parent.

On Shaking Off The Haters Who Are Gonna Hate, Hate, Hate

What? It's good advice!

On Finding Yourself Through The Bad Times

It's true. You learn a lot about who you are as a person when bad things happen to you. But time passes, wounds heal, and eventually, you move on, more prepared to tackle whatever's next.

On Figuring Out Who You Are

I'm alone, on my own, and that's all I knowI'll be strong, I'll be wrong, oh but life goes on

Make mistakes. You've never failed if you're learning something. Where was Taylor Swift when I was in middle school? This is valuable stuff.