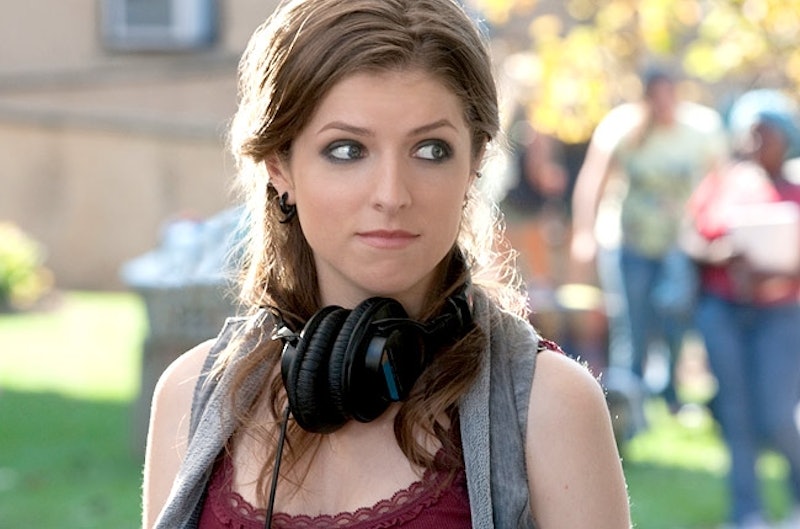 You've seen the movie a dozen times. You know every mash-up song on the soundtrack lyric for lyric, and you preface every "a" word with "aca." You love Pitch Perfect as much as we do, and with the sequel to the 2012 surprise hit around the corner, we can't wait to see the Barden Bellas back in full force. This time around, the girls enter into an international acapella competition that no American team has ever won before. Leave it to these pitches to tear up the competition and leave everyone applauding (or, lesbihonest, scowling at) their synchronized lady singing. It's happened before, and it's sure to happen again before their (hopefully) triumphant third act.

We loved the first movie for its excess of pop culture references — "Hey Hilary Swank from Million Dollar Baby" — but as much as we adore the 2012 comedy's attempts at staying relevant, there are some things the film it has forever ruined. You know, like Psycho ruined showering. Or American Pie ruined... pie. We will forever bow down to the badass Bellas and their killer pipes, but here's 13 things Pitch Perfect, starring Anna Kendrick and Rebel Wilson, has forever ruined, from The Breakfast Club to red Solo cups.

It's a John Hughes classic. But this running pop culture reference extends so vastly into the film we're ready to hit pause on our Simple Minds cassette tape. The Breakfast Club's Bender is the original badass, and while his fist pumping and morning coffee habits are endearing, they become less so when imitated by sing-songy Jesse. Let's hope this movie stays safely in our nostalgia for the sequel.

No, Anna Kendrick doesn't use red Solo cups during her audition to become a Barden Bella. But the red Solo cups are iconic during the outdoor party scene. Rebel Wilson's character is being hit on by Adam Devine's and drunken Jesse makes bird noises out of Beca's name, all the while toting red Solo cups, the quintessential college party carryon.

According to Rebel Wilson, Tasmania is a terrifying, and racially intolerant, place.

Just when you've fully recovered from terrors of seeing Norman Bates appear in your shower, and now you're frightened that Chloe, with her nodes and all, will appear fully naked in your dorm room shower.

That is, people dressed as flight attendants.

Ace of Base's 1993 album, The Sign, was the first album I ever owned. After hearing The Bellas brutalize the hit song "The Sign" over and over again in their tired routine, I'd like to break the severely scratched disc over my knee.

Having a Record Collection

Having a record collection is now pointless, unless adorable-as-Hell Jesse is there to play with them in front of you. Watch above to see the extended, non-cinematic version of Beca and Jesse's banter.

With a roomie like Kimmy Jin, wouldn't you just prefer to be a loner?

Donald Faison is a national treasure. From being mischievous Murray in Clueless to Zach Braff's BFF/lover(?) Turk on Scrubs, he has a special place in our hearts. But seeing Faison as a washed up acapella star hanging out at high schools is beyond depressing.

It was cute at first, but now... OK, it's still pretty damn cute, lesbihonest.

This is just a straight up lie. We will never, ever, get sick of watching the Bellas in their synchronized lady dancing techniques. Honestly, this addition was just an excuse to use the above gif. And this one:

Watch the trailer for Pitch Perfect 2 below:

More like this
Shakira Joked About An Early 2000s Video Of Her First Camera Phone Encounter
By Stephanie Topacio Long
Coldplay Surprised Fans At Wembley Stadium With This Special Guest
By Frances Stewart
Revisit 1992’s 'A League Of Their Own Cast' Photos After The New TV Series
By Grace Wehniainen
At 28, Lesley Manville Was Acting, Picketing, & Singing Kate Bush Songs
By Olivia-Anne Cleary
Get Even More From Bustle — Sign Up For The Newsletter