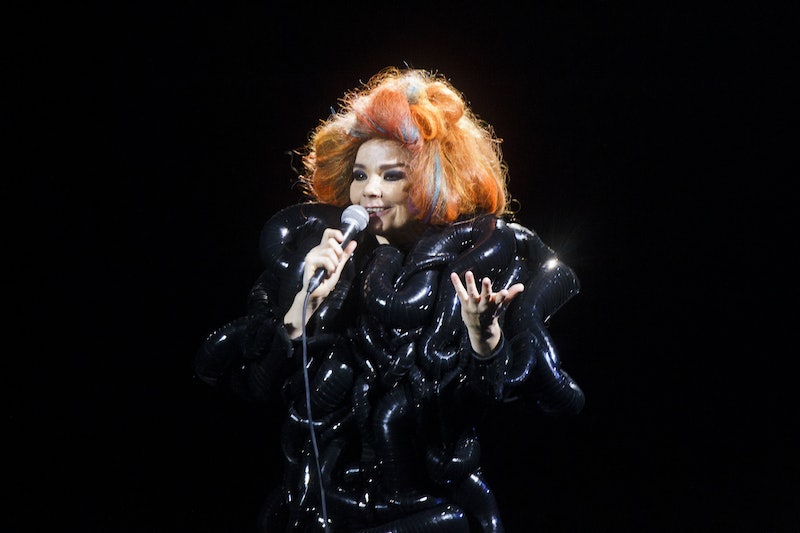 The Icelandic superstar with style beyond your imagination and a once-in-a-lifetime voice, has just made a rather impressive list: Bjork in TIME's 100 Most Influential People. She's listed under the category of "Icon," and it's not hard to see why. The singer is much more than just a pop star: She's an artist, a forward-thinker, and her influence has given her fans the courage to be themselves just as she has so artfully done over the years.

When she first burst onto the international scene in 1993 with her world famous solo hit "Human Behavior" partnered with its widely played music video directed by Oscar-winning director Michael Gondry, the world probably didn't recognize the fierce and creative force Bjork would become. But over 20 years later, she's still performing and enchanting audiences today.

One of the most dazzling ways she has brought attention to herself is her infamous wardrobe, both in her public appearances and in her music videos. Some of her looks are still being parodied — who can forget the incomparable Swan Dress of 2001 she wore to the Oscars? So I've compiled a list here of her wildest looks to date (and here's to hoping she continues to wow us all in the future!):

As mentioned previously, this is probably her most iconic look, and has been parodied by Ellen DeGeneres, Kevin James, and countless fans. A statue of Bjork in this dress was also displayed in the Museum of Modern Art's Bjork retrospective.

The video claims this headdress trumps her swan dress, but as we know, pretty much anything she dons will trump her last outfit. As is not too unfamiliar for her, this piece looks straight out of a sci-fi flick.

This look was put together by none other than Alexander McQueen, and truly gives justice to both the designer and the performer.

Bjork rocked this head piece in 2003 at the Hurricane Festival. It mimics a flower around her ears, but the petals are actually feathers.

Bjork wore this dress at the Cannes Film Festival while promoting the Danish musical Dancer in the Dark (2000) which she starred in. The dress almost looks like something out of a paper pop-up book, and she makes it look just as dainty.

The music video for 1999's single "All Is Full Of Love" portrayed Bjork as a robot, where all you saw of her was her very human face in a very robotic body. Although the robot was a little creepy, the look certainly belongs in this list.

Her costume for her Volta album cover is shown here, and was also displayed at the MoMA. The piece is the brain child of fashion designer Bernard Wilhelm. I'm not even sure what it is, but its vaguely reminiscent of some kind of chicken with human feet.

This piece from hair artist Soren Bach accompanied her in a European tour. The dress itself is one thing in this ensemble, but how she managed to sing and perform in that head gear is beyond me. The woman is a true artist.

Bjork wore this one at a show in 2005 in Japan. I suppose the best way to metaphorically describe her sense of fashion is by way of the butterfly — the metamorphosis is a beautiful thing.