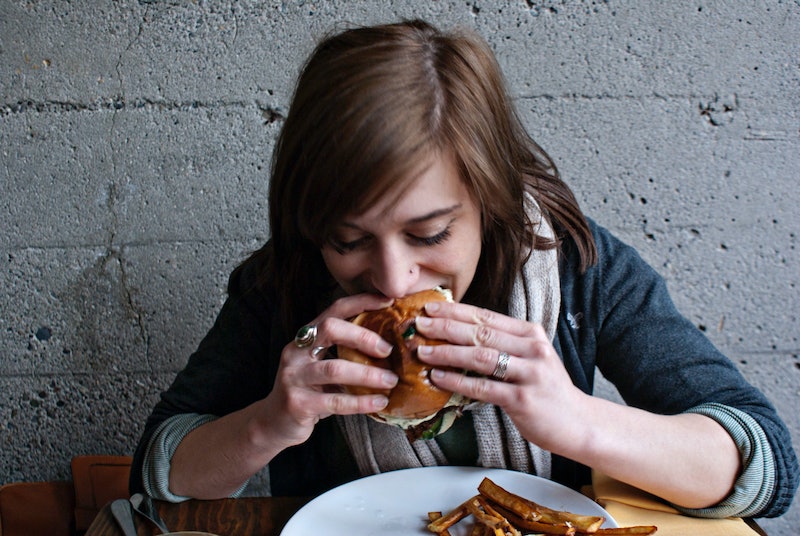 I forgot to eat. I skipped lunch today. I could eat the same thing every single day. A true foodie wouldn't say any of those things. Foodies are people who love food, but not just as fuel for their bodies. They have a passion and excitement about food, and try not to take any meal for granted. Every bite is planned, and if by circumstance or bad luck they are forced to eat something less than yummy, they’ll feel cheated. For a foodie, any time anything is to be eaten it’s an opportunity to indulge their senses. Food should look beautiful, smell amazing, and taste beyond delicious.

Being a foodie isn’t just about satisfying the taste-buds though, it’s about seeking out new food experiences, trying unique taste sensations, and revisiting favorite meals from their childhood.

Foodies aren’t snobs; they aren’t like the gourmets of the past—foodies enjoy 5 star restaurants right along with the B-rated ones their friends think are scary. Foodies believe in taking chances because you never know which hole in the wall has the best soup dumplings, or how the café next to the car wash has the most spectacular bibimbap. Foodies make eating an adventure. Here's what to expect when you date one.

1. Anything that comes out of a box should be avoided unless it’s mac and cheese.

Boxed meals feel like cheating to a foodie,(especially one that cooks,) but worst of all are all the chemicals that are added to keep it from going bad. Boxed mac and cheese is the only exception to this rule, because like sex and pizza, there really is no bad mac and cheese. Although there are many incredible variations such as lobster mac and cheese or mac and cheese with truffles, when you’re craving mac and cheese almost anything will do.

2. Party food is much more than chips and dips.

Was there ever a better excuse for having some out-of-the-ordinary eats than a party? There are so many theme parties you can give with fun food such as a 1960s Mad Men party with retro delights like pigs in a blanket and fondue, a Wine and Cheese gathering (which gives you an excuse to buy out the artisan cheese shop,) a Mexican fiesta complete with seasonal tamales and mini-tacos, a Parisian Café party with bistro food including duck confit and steak frites, or an English Pub party with bangers and mash, fish and chips, and a bit of spotted dick.

3. Why Molecular Gastronomy, Sous Vide and Foam are important terms for you to know.

Many a cooking reality show have been won and lost on the improper usage of these things. You’ll need to know the difference between all of them, and why foam isn’t disgusting when it’s served to you on a plate.

By being involved with a foodie, you’re going to get to know these Food Network, and Bravo chefs pretty well, because in all honesty The Food Network is your foodie’s non-guilty pleasure, and she feels as if all of these chefs are her friends—imaginary friends, but friends none the less.

5. Meeting Aarti Sequeira (Season 6 winner of Food Network Star) would be much more exciting for her than if she met Peyton Manning.

Peyton Manning may be able to throw a football, but can he cook? Aarti sure can and she seems so friendly plus her usage of Indian spices is to die for.

6. Your foodie knows the difference between custard, frozen custard, flan, and crème brulee and she knows where to get them wherever she goes.

Your foodie has most likely been a foodie all her life and she’s been trying new foods whenever she's able. She’ll know that Luv-It Frozen Custard in Las Vegas is awesome and she’ll know which two flavors they’re offering on any day. It's her spidey sense.

7. You’ll become fluent in the language of dim sum.

You may not speak Mandarin or Cantonese, but you know how to order shrimp rice noodles, siu mai, and sticky rice wrapped in lotus leaves when those ladies with their carts roll by your table.You'll impress your foodie by knowing that with chicken feet only the soft parts are edible.

8. Her bucket-list only has restaurants on it.

There are so many to try that you could go crazy trying to get to them all—but it would be a happy, full of delicious food kind of crazy.

You’ve heard of the freshman 15? When you’re with a foodie, gaining weight is a risk you take. Now, sit back and enjoy your falafel.

Your foodie knows the correct way to pronounce this delicious noodle soup as fah not faux . She will get highly annoyed when places will intentionally misspell it as a way to be cute, such as Pho No and Pho Knee. Please don’t use any oyster crackers when eating pho—that would be a sin.

11. Yelp and Chowhound are everything.

They’re on her cell, her tablet, her lap top. She consults them before she dines out every time. In fact, she will take their recommendations to heart, and by the time you actually go to the restaurant, she already knows what’s she’s going to have.

12. Buffets are for tourists.

You might think with the choice and selection of foods at a buffet that your foodie would be into them, but actually she's repelled by them. All that food sitting there under the hot lights, growing nastier by the minute. No buffets are against everything that a foodie stands for. She wants farm to table, not to eat like a farm animal because she's able.

13. She has a well-stocked pantry.

No cupboard is ever bare where your foodie is concerned. If for some reason dinner plans out fall through, your foodie can whip up some amazing pasta, even without going to the grocery store. She also has food at work, in her car, her gym bag, and there’s even a granola bar hidden in her purse in case her blood sugar drops and she needs snack before dinnertime.

14. Breakfast isn't too early to think about what to have for lunch and dinner.

Her philosophy is that a meal is a terrible thing to waste, so planning is crucial, especially when traveling. If she missed having beignets in New Orleans or pizza Bianca in Rome, she’d never forgive herself.

15. Always take pictures of your food BEFORE you eat it.

She’s going to want to relive those delicious curry noodles again and again-pictures help the memories to remain, long after the indigestion has gone away.

Beyoncé is cool, but your food-loving girl would rather be Ina Garten. She imagines what it would be like to go out to her fabulous garden in the Hamptons and pick fresh parsley, sage, rosemary and thyme, and then whip it up into a fabulous meal for her sweet twinkle-eyed husband Jeffrey-only younger. Sigh, life is good when you’re the Barefoot Contessa.

Your foodie is comfortable in a fancy dining establishment or eating bacon-wrapped hot dogs from a cart in the garment district. It isn’t the price that’s important to her, but the taste and the delicious memory of a meal well spent.

18. You won’t need to set the alarm on your phone.

It’s crazy how easily your foodie can wake up when it’s for a farmer’s market or maybe it's because it’s so ingrained in her to go once a week—rain or shine. If she’s feeling under the weather, she’ll still get her Italian string- grocery bags, pull on a raincoat and go. Well, everybody knows you can’t get good tomatoes at the super market.

Don’t despair your foodie doesn’t love food more than she loves you, it’s just that food is something she enjoys, and it's a conduit to places, people and experiences. She’s happy that she can spend time with you enjoying a good meal or sharing a snack. It's what she loves to do.