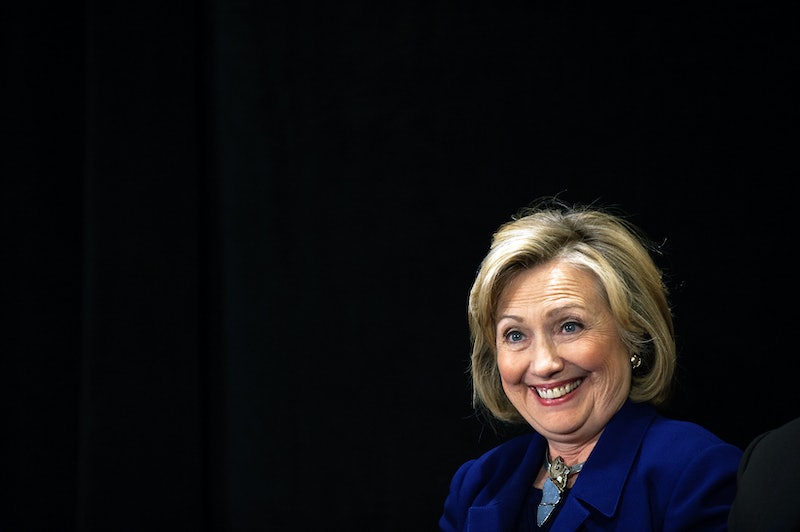 According to the New York Times, Clinton visited a Chipotle in Maumee, Ohio, on Monday during her campaign tour from New York to Iowa. Nobody recognized the potential next president of the U.S., since Clinton was wearing sunglasses and seemed to be traveling incognito. According to Chipotle Manager Charles Wright and several reports, Clinton ordered a chicken burrito bowl, a chicken salad, a Blackberry-flavored Izze drink, and a soda. She also paid the extra $1.80 for guacamole on her burrito bowl.

This may seem like a totally ordinary, run-of-the-mill Chipotle order, but if you dig deeper, each component says something quite profound about the Democratic front-runner. And it's common knowledge that choosing guacamole is always a strong sign of good character. Here's what Clinton's order says about her.

Not only did she choose the chicken burrito bowl (when the much more sumptuous options of braised carnitas and adobo-marinated steak were staring her in the face), but she also ordered a chicken salad. That's a lot of chicken for one person, and I'm impressed.

She Likes To Eat Things In Bowls

Clearly, Clinton is a fan of burritos, but her choice of the burrito bowl over the usual hand-held, wrapped version implies that she needs to remain neat and composed. She is running for the country's highest office, after all. Alternatively, she might just have a thing for eating out of bowls.

Shelling out almost $2 extra for guacamole speaks volumes to her character. Not only does it indicate that she has stellar taste in food, but it also hints that she'll go the extra mile in everything she does. Why not make your burrito bowl perfect if you can? Two dollars is a modest amount to pay for such a worthwhile reward. If this is her mentality on burritos, imagine what she can do with America.

The fact that Clinton ordered two beverages says that she's a planner, always two steps ahead with a contingency plan. In case her burrito leaves her mouth extra dry, she'll have not one but two drinks to quench her thirst. Marco Rubio should take note.

She's Not Afraid To Indulge

Let's face it, Chipotle may use fresh ingredients, but it's not exactly health food. There's a reason Chipotle has a cult following, and it's not because of its health benefits. Clinton could have gone to a Just Salad or had a personal chef make her something uber-healthy, but instead, she decided that she was going to enjoy life instead. Which brings us to the next point...

Clinton's choice to go to Chipotle, above all, says that she's just another American who craves burritos once in a while. If a president is truly going to represent the American people, he or she should start with the most important fundamental: food.