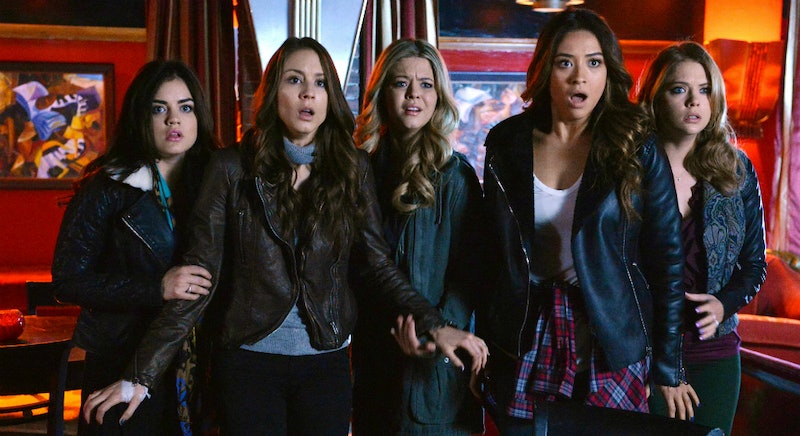 We're still a few weeks away from the premiere of Pretty Little Liars Season 6 on June 2, but that doesn't mean that fans aren't busy working on their theories as to just what the new season has in store. While we may know that Big A is Charles DiLaurentis, the Pretty Little Liars mysteries are far, far from over. There's still a big question mark looming over the night that Alison disappeared and Bethany was killed, and it all circles back to that girl in a yellow top — or rather the girls wearing the yellow top. We know that Ali disappeared in the yellow tank, and that Bethany seemingly wore the same color top when she was killed. Now, an Instagram picture from new Pretty Little Liars cast member Dre Davis is making everyone think that maybe Bethany was never killed at all — and that Dre Davis' Pretty Little Liars character Kimberly Brown could be Bethany. Are these theorists right? I'm not so convinced.

In the since-deleted Instagram post, the blonde Davis is wearing that yellow top and looks suspiciously like Ali. That's not something that fans are taking lightly — even though Davis is allegedly playing a new character named Kimberly and not Bethany. But while Davis' presence on the show is suspect (she does look so much like Ali!) I'm not entirely sure that it's actually Bethany that this girl is playing. We already found Bethany's body in that grave after wrongly assuming it was Ali's — would the show really do that fake-out twice? I think it's more likely that the show would go for a completely different twist instead — and I have a few theories about who Davis might really be playing.

According to showrunner I. Marlene King, we will find out what happened to Sara Harvey in Season 6. For those who need a refresher, Sara is the girl who Hanna suspected of being inside Ali's grave before Bethany was identified. She's roughly around the same age as Ali, she's blonde, and, perhaps most importantly, she was her own school's Queen Bee. There are plenty of theories as to what actually happened to Sara, but there's a good chance that this "Kimberly" is actually Sara and is using the fake name Kimberly to hide out. Though it was revealed that the picture above is actually a stock photo (LOL) there's no reason to think that a similar looking actress couldn't play Sara on the show.

She's A Girl Obsessed With Ali

Ali has plenty of fans and fanatics who want to be just like her. Even Mona, who professed to hating Ali, copied her persona to become the most popular girl in school. The only thing we know so far about Kimberly is that she's a "tomboy-ish" girl who used to "brim with confidence," but had to "deal with a lot in order to get her old self back." Perhaps Kimberly is using Ali's persona to win back this confidence she lost.

Pretty Little Liars is obsessed with doubles, and I wouldn't be surprised if Bethany had one of her own. If Bethany had a sister (and perhaps even a twin) the sister would look an awful lot like Ali, simply by virtue of Bethany and Ali sharing so many similarities. The death of Kimberly's sister would explain why she needed to "get her old self back" — she was dealing with the disappearance and later death of someone she loved.

She's A Friend Of Charles

If Charles really did try to kill Ali, he would have needed quite a few "helpers" to make sure the plan went off without a hitch. What if Charles hired Kimberly to dress up like Ali in order for his to more easily find the real Ali that night?

More like this
Everything To Know About The 'Pretty Little Liars' Reboot On HBO Max
By Mary Kate McGrath and Jack Irvin
Stranger Things Fans Really, Really Hope These Characters Will Survive Season 4 Volume 2
By Grace Wehniainen
Vanessa Hudgens Proves She's Always A Wildcat At This 'High School Musical' Location
By Alyssa Lapid
'Criminal Record' Is The 'Doctor Who' Reunion We’ve All Been Waiting For
By El Hunt
Get Even More From Bustle — Sign Up For The Newsletter