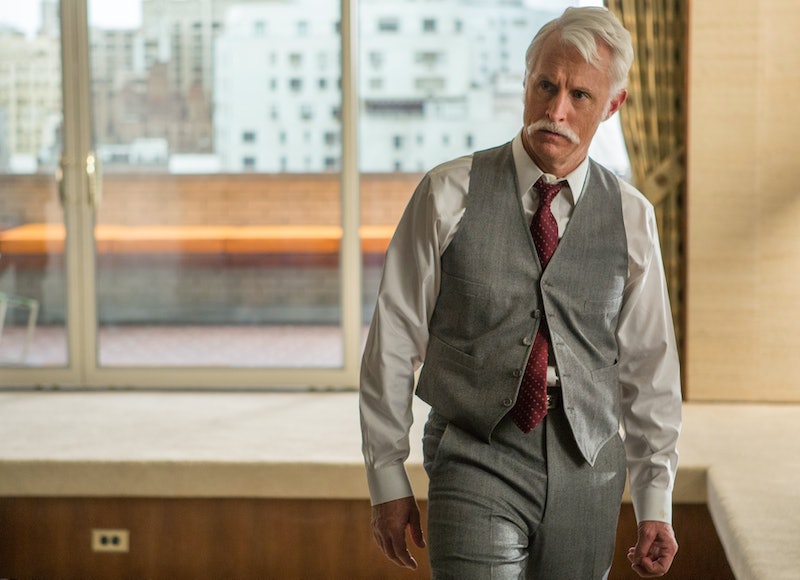 As Mad Men draws to a close, it's easy to start speculating about the fates of its characters. After all, we've spent more than six seasons with them so far; we're all invested in them. Now's the point in the final season when the anxiety about what'll happen to them starts to creep in. Will Matthew Weiner give them all the proper sendoff? Or will we be left hanging, a la the end of The Sopranos? The entire internet is buzzing with guesses. Most of these whispers are about the final fate of Don and Peggy, but what about SC&P's silver fox? Will Roger Sterling die on Mad Men ? (Warning: Don't read on if you're not caught up.)

Let's just say that, when it comes to Mad Men, reading the tea leaves is extremely hard. It's not really a show that's into foreshadowing. Fans look for clues in the episodes all the time (remember when everyone was obsessing over Megan Draper's Sharon Tate-like star shirt?) but rarely have I seen internet theories about the show actually pan out. It's like True Detective in that way, where it invites obsession, but doesn't always reward it.

Still, while the show is light on the foreshadowing, it is a character-driven show, so I will try to make an educated guess about Sterling's fate based on his past behavior, which is the truest Mad Men predictor. And I think he might just bite it. Here's why.

Did they get Sterling to stop smoking, drinking, eating unhealthy, or reducing his stress? No. In fact, he's added LSD, group sex, and fighting with hippies to his list of extracurricular activities. If that's not a recipe for a third cardiac event, I don't know what is.

Death does not smile upon those who get their name above the company door. When it was SCDP, Pryce was driven to suicide. After it was changed to Sterling Cooper & Partners, Cooper bit the dust. Now only Sterling remains, and he might follow in his mentor's footsteps beyond just helming the company. I can only hope he also gets his own musical number.

Doesn't everything seem to be wrapping up for Sterling? He made amends with his daughter, even if that did only last one day. He slept with Megan's mother again, bringing that whole relationship full circle. He wrested his company back from Cutler, Gleason, and Chaough. His personal and professional life is in order. He could bow out on top.

When Slattery was interviewed by Vulture at the Atlantic Theater Company’s 30th Anniversary Gala at the Pierre, they asked him where he thought Roger Sterling would be in ten years. "That's easy," he answered. "Dead." It was probably a joke, but was there a grain of a hint in there?

This facial hair is not the facial hair of someone who is getting all the oxygen he needs in the brain.

The next two episodes, "The Forecast" (airing April 19) and "Time & Life" (airing April 26), both feature (a living) Sterling in their episode descriptions. So he could have a temporary stay of execution. Or maybe he'll be one of those people who just drinks, smokes, does what ever he damn well pleases, and lives to be 100. There's a kind of Mad Men lack of poetic justice in that.