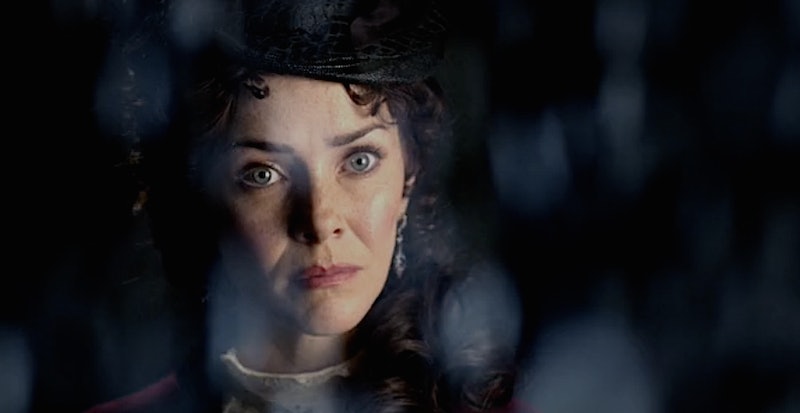 If you're thinking it's been an eternity since the last Vampire Diaries episode, then you and I are of the same mind. (Seriously, longest hiatus ever.) However, Thursday night's episode "I Could Never Love Like That" more than made up for this unreasonably long vacation by actually making Enzo's story arc pretty darn interesting! Because when he went knocking on the old Salvatore mansion in an attempt to drop off Sarah into someone else's care, Lily greeted him at the door and boy-oh-boy was he not happy to see her. Come to find out, it was Lily who turned Enzo into a vampire back in 1903, sometime right before the Gemini Coven banished her to the prison world.

You see, Enzo was sick with consumption back then and in dire need of some assistance, which Lily was so amply kind to provide. However, her kindness quickly took a turn for the worst when, you know, she outright murdered every single human being onboard. (Rippers get thirsty, ya know.) But aside from leaving him a tasty treat to complete his transition, he never saw her again aboard the ship or anywhere else, no matter how hard he searched. She simply made him a monster and disappeared without any explanation. (So much for the good samaritan vamp routine.)

So what does all of this tell us? Mama Salvatore may be acting like the doting mother right now, but underneath that lies the un-beating heart of a cold-blooded killer. A person that nobody in Mystic Falls should trust. And given how adamant she is to get her prison world "family" back, I'd say she has a bigger plan for this town than simply a family reunion. As she confessed to Damon, she has trouble feeling anything for them anymore, no matter how hard she tries. That's not exactly the kind of sentiment any child wants to hear from their parent, especially poor Damon who already had a serious case of abandonment issues.

What I still don't get though is the fact that she didn't seem to remember Enzo upon seeing him. I mean, I know it's been a while, but given that she was placed in a prison world shortly after turning him, you'd think she's recognize him straightaway. (It's not like she was able to turn many other people once imprisoned.) So what kind of game is she playing at here? Because whatever it is, it's bound to have serious consequences. Watch your backs, Damon and Stefan. Mommy dearest is not what she seems.