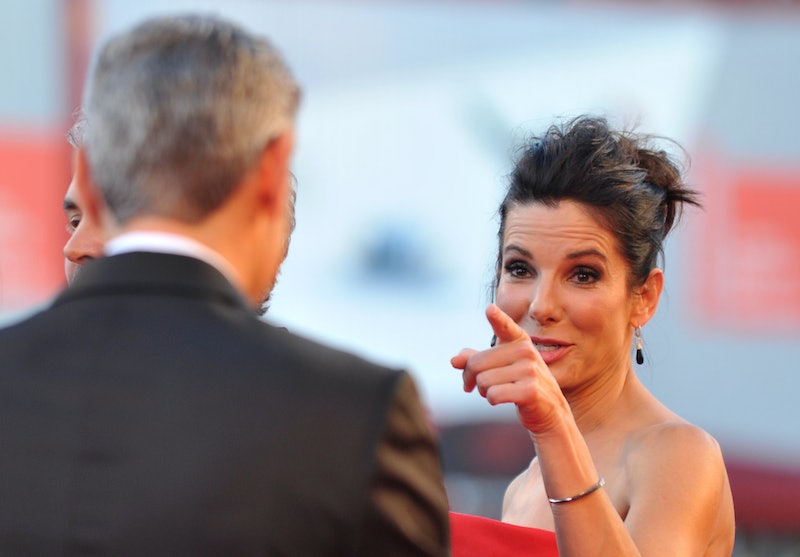 Sandra Bullock became America's Sweetheart by charming moviegoers with the amazing one-two punch of hit films Speed in 1994 and While You Were Sleeping in 1995. Speed showed Bullock's herotic side on a speeding (ahem) bus, but the latter movie displayed her romantic, wacky, and kinda creepy sides. While You Were Sleeping is totally the creepiest romantic comedy, because Bullock stars as Lucy, a lonely metro worker who poses as a stranger named Peter's (played by Peter Gallagher) fiance and ingratiates herself into his family — while he's in a coma. Along the way, somehow she finds real love with the man's brother Jack (Bill Pullman), even though she just spent an entire movie lying.

But critics and audiences adored the movie in the 90s. While You Were Sleeping grossed $182 million worldwide and the film has an 80% "fresh" rating on Rotten Tomatoes. Even film critic Janet Maslin of the New York Times was impressed with the film. "This is a formula film, but it has the kind of good cheer and fine tuning that occasionally give slickness a good name," she wrote. "It's the word-of-mouth-worthy fact that this spirited screwball romance creates a rosy glow."

But now, While You Were Sleeping and Bullock's Lucy come off as totally creepy in so many ways.

Lucy Falls In Love With A Total Stranger

Look, we've all been there — that good-looking stranger catches your eye and you start to be hyper-vigilant. You know their schedule. You notice they wore that shirt two days in a row. But Lucy takes it to a whole other delusional level by hoping to marry Peter Callahan — a man she has never even spoken to. And she carries on with the mixup at the hospital and continues lying that she's his fiance.

In the real world, this would be creepy, but in While You Were Sleeping, everyone just goes on and on about how "special" and charming Lucy is.

Lucy's Neighbors Are Creepy, Too

While You Were Sleeping likes to justify Lucy's lies and weird attachment to the Callahan family by showing that she's so lonely. Well, it's not like people aren't trying to be her friend — in fact, Joe Jr. tries a little to hard to be her boyfriend. Maybe that's why she's so creepy — she's surrounded by creepsters.

Peter's Godfather Saul confesses that he overheard Lucy's own confession to Coma Peter that she wasn't his fiance, but he agrees to keep up the lie. Seriously. He says she's brought the family together and given them back Peter, who seemed to be drifting from them. Yet he doesn't see that Lucy is living a lie and infiltrating the Callahan family? She is a Lifetime stalker movie waiting to happen.

She Gets Into His Apartment

Lying technically isn't a crime, but then Lucy goes and takes it one further and goes to Peter's apartment. Okay, she doesn't actually break-and-enter (she has keys), but now this stalker behavior is getting serious.

I had totally forgotten about this until I rewatched the movie, but Lucy gets blessed with the knowledge of a single Peter fact that absolves her of any doubt that she's his fiance — one of Peter's coworkers tells her that Peter lost a testicle when they played basketball and there was a pencil in his pocket (not so happy to see him). This comes in handy when Jack, the only sane person in the movie, got suspicious of Lucy, but once this bizarre fact proves to be true, he's suddenly okay with her. Not only that, he later becomes attracted to her.

Even Lucy's Friend Thinks It's Nuts

Lucy tells her friend Jerry about the mess she's created — the Callahans think she's going to marry Peter, but she actually likes Jack and Peter is comatose — and he tells her to just tell the truth. That would just be too easy, wouldn't it? So Lucy doesn't. At one point Jerry exclaims, "Lucy, they have doctors for this kind of thing." Seriously, girl. Get some help.

Lucy and Jack Get Engaged Right Away

After Lucy confesses at the altar that she's a liar and loves Jack, the family still loves her anyway. And so does Jack. He proposes to her. Because when a lonely Metro worker stalks your brother, lies to win over your family, and lies to you — the answer is marriage and keep her in the family.

I know, I know. This is a romantic comedy and it's made for hopeless romantics that believe love can overcome all obstacles. And it's a fun movie — my heart isn't entirely made of stone. But really? No one's mad? I mean, there are Lifetime movies like this that end really, really badly.

I guess While You Were Sleeping proves even if you're a creepy lonely liar, if you encounter the right coincidences, you too can have a happy ending.

More like this
The New 'National Treasure' Series Trailer Teases The Return Of A Popular Character
By Grace Wehniainen
Read The First Pages Of Emma Rosenblum’s Highly Anticipated Debut, 'Bad Summer People'
By Samantha Leach
What Joyce Carol Oates Knows About Fame
By Erin Somers
Harry Potter's Viktor Krum Has Undergone A Huge Transformation Since Hogwarts
By Sam Ramsden and Meguire Hennes
Get Even More From Bustle — Sign Up For The Newsletter