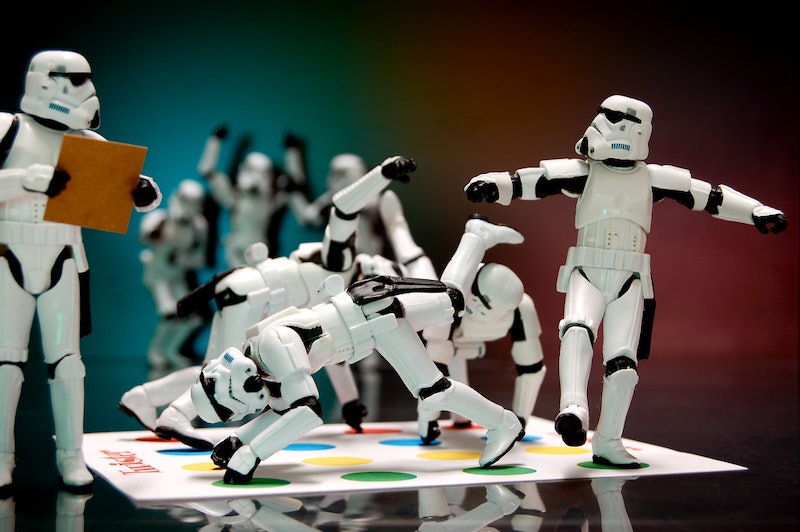 The new trailer for Star Wars: Episode VII made big waves when it dropped yesterday, because let's face it: Anything related to Star Wars will always make big waves, because, well, Star Wars. But just in case you missed it during all the hullabaloo, the trailer isn't the only thing that landed on our radar yesterday — so did Star Wars emoji for Twitter. And you guys? They're kind of the best. I mean, I realize that, as one sci fi nerd from a long line of sci fi nerds (seriously, my entire family falls under this umbrella), I'm exactly these things' target audience… but still. Star Wars emoji, you guys.

The three little images — C3PO, a Stormtrooper head, and the head of new droid BB8 — made their debut yesterday courtesy of the official @StarWars Twitter account (because from whence else would them come?), and they've been taking the social media site on by storm(trooper) since then. Also, I'm terribly sorry about that awful, awful joke I just made. Maybe not that sorry… but sorry enough. What can I say? It had to be done.

In any event, the emoji announcement itself made how you access them pretty clear — and, thankfully, it's super easy. No need to do any fancy trickery like you do in order to get the Star Trek live long and prosper emoji on your iPhone! Here, check it out:

All you need to do is type in the corresponding hashtag for each emoji and hit the “Tweet” button. When your tweet launches, the appropriate emoji will show up right where you told it to. Neat-o, right?

The only downside? The emoji don't just appear on their own; they're always preceded by the hashtags that summon them. This means that you can't just tack a little image of C3PO onto the end of whatever tweet you want — it'll always display as “#C3PO” plus the emoji. But you know what? That's OK. Because it's enough just to be able to pepper our conversations with droids in the first place.

And hey, look what I found out when I tested them out myself?

One small caveat: The emoji appear to be visible only on Twitter itself. You'll notice that the tweet seen here is a screengrab; that's because when I tried to embed my tweet, the emoji disappeared from it. The same is true of the one from @StarWars a little further up — if you visit the tweet's permalink, you'll be able to see the moji, but they're not visible here in the embed. Why is that the case? No idea, but maybe just bear it in mind. Can't have everything, I suppose.

I'm not sure whether these emoji are a limited-time deal or whether they're a permanent addition to Twitter's emoji lineup — but either way, I'd take advantage of them as soon as you can. May the Force be with you!