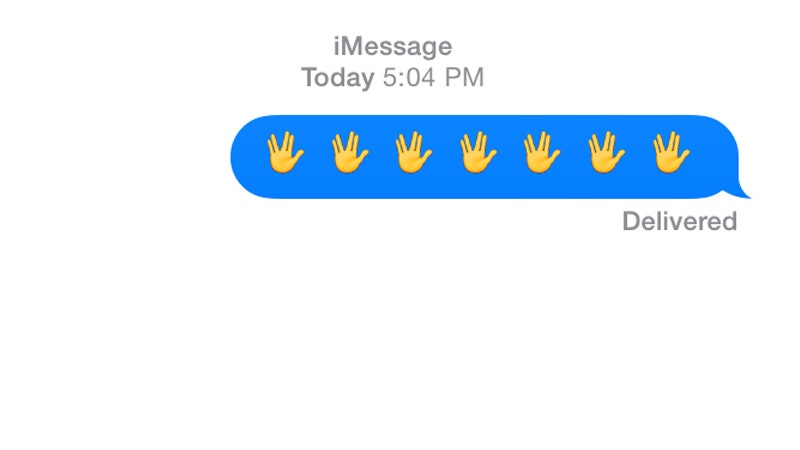 In a continuation of my ongoing exploration of weird technology tricks most of us probably don't know about (or at the very least, ones we definitely don't use on an everyday basis), today I bring you this: Secret emoji tricks I had no idea existed until now. Did you know they existed? No? Then welcome! Come, let us explore these strange, new pieces of knowledge together! And if you did know about them already... well, why didn't anyone tell me? They are so cool, and I may have just found my new favorite method of procrastination. And given that the new iOS update has all those new ones... yeah, there goes my afternoon.

We all know how to access the regular old emoji keyboards on our phones, and we know that when we type ":-)" into most chat clients, what's going to come out is an animated smiley face. But it turns out there are also ways to put emoji where no emoji has gone before (like the name of your Wi-Fi network), ways to add secret emoji to your iPhone keyboard, and much, much more. Seriously, you guys. I had so much fun finding out about all of these neat-o tricks that it hardly even felt like work.

Check out the fruits of my labor below — and do let me know if you've got any to add to the list. These things are fascinating.

1. You Can Name Your Wi-Fi Network With An Emoji

Or a string of emoji — anything goes, really. I discovered this magical trick was possible thanks to BuzzFeed, but I had to do a little digging in order to find out exactly how to do it. Perhaps unsurprisingly, the easiest method pretty much just requires you to have a Mac: According to Lifehacker, all you need to do is go into System Preferences > Sharing > Enable Internet; then select “Wi-Fi Options” and copy and paste the emoji you want to use in there. Ars Technica has a super in-depth guide for how to change the setting on your actual router, but it's best attempted by people who really know their way around computers. You can also give this walk-through by Keyables a go.

I never use Siri (or, for that matter, most of the voice-activated commands on my phone). But today I learned that, if you ask Siri to read you a text that happens to have an emoji in it, she'll describe the emoji for you. When I asked her to read the one seen here, she actually said, “Winking face with stuck out tongue.”

She can also take dictation, although it seems she can only do simple emoticons. For example, asking her to reply with the same emoji — “winky face with tongue stuck out” — results in this:

I don't know whether there's an Android equivalent, but if you have an iPhone and, like myself, don't typically use the dictation features, you may want to start playing around with it. It's pretty entertaining.

3. You Can Add the Vulcan Salute to Your iOS 8.3 Emoji Keyboard

This one? Hoo boy. I grew up in a house where Star Trek was a family event each week, so this one fills my geeky little heart with so much joy, I almost don't know what to do with it all. The Vulcan salute isn't technically an emoji in the new iOS 8.3 update… but you can still use it if you get a little sneaky about it. The YouTube channel GadgetHacks put out a super easy to follow video walking you through how to add it to your keyboard, so just follow the steps and voila. Live long and prosper.

4. You Can Also Add Kaomoji To Your iPhone Keyboard

Adding kaomoji — those super cool Japanese emoticons we learned about back in March — takes a little bit of trickery, but it's still relatively simple to do. This video from YouTuber Lito290 explains it quite well, so if you want the step-by-step, give it a watch; all you really need to do, though, is follow the following command string: Settings > General > Keyboard > Keyboards > Add New Keyboard. Once you've done all that, select Japanese > Kana, and you're golden. Now you can send kaomoji like this:

OK, yes, we already covered this one in our examination of secret Facebook tricks — but cross-referencing it seems like the thing to do, so let's go through it one more time. You can actually use anyone's profile picture as an emoji in Facebook Messenger simply by putting double brackets around their user name when you enter it into the text field. Voila! Instant emoji.

Another oldie-but-goody. The website Google Chat Emoticons has a list of all the secret Gchat emojis you can access simply by typing in the correct sequence of keys whenever you have a chat window open. My personal favorite? The robot. It's just so cute.

7. There's a Reason the Poop Emoji Looks So Much Like The Ice Cream One

It's not a trick, but it's still fun trivia: Back in 2012, New York's Joe Coscarelli carried out a brief interview (via text, with emoji, of course) with Willem Van Lancker, who, as an Apple intern, created 400 of the original 500 emoji on the iPhone 3GS. When asked why the poop emoji looks so similar to the ice cream one, he said, “Some design elements may have been reused between them...” — followed by a winky face. It's definitely not unusual for technological design elements to get recycled and reskinned, so this is perhaps to be expected… but it's still pretty funny.