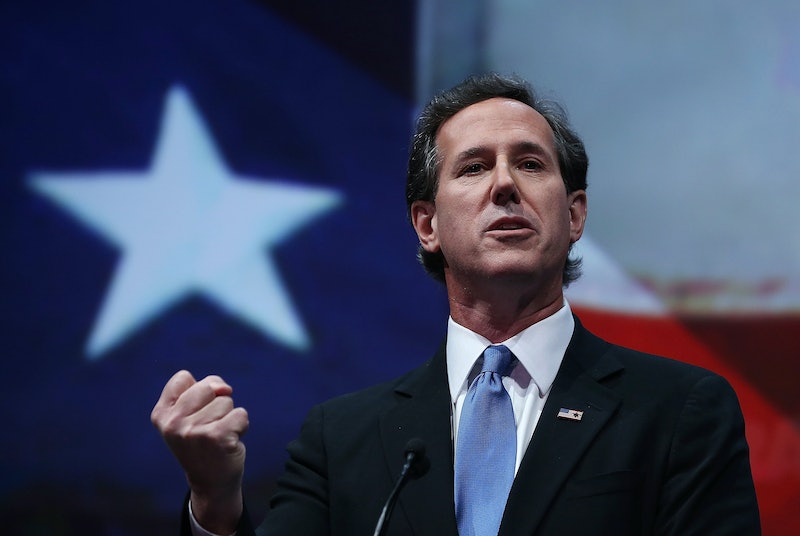 This former Republican senator from Pennsylvania has surprised approximately no one with his latest firm statement against liberal social values. Asked by conservative radio host Hugh Hewitt whether he would attend a same-sex wedding, Santorum said Thursday he would never attend a gay marriage, even if it were the ceremony of a loved one. “That would be a violation of my faith,” he said on the air. Santorum, who ran for president in 2008 and may do so again in the 2016 race, is known for his hard-line conservative views.

Santorum was joined on the Hugh Hewitt show by Ted Cruz, another Republican 2016 hopeful. Cruz completely dodged the question as a non-issue. “I haven’t faced that circumstance. I have not had a loved one go to a, have a gay wedding,” he said. What! Have a gay relative? Not Cruz.

Santorum was more forthright. “I just felt like as a person of my faith that would be something that would be a violation of my faith,” he said. “I would love them and support them, but I would not participate in that ceremony.” Hewitt’s curveball question comes after Senator Marco Rubio of Florida said he “of course” would attend the gay wedding of someone he was close to.

Rubio, who launched his presidential bid Monday, made no bones about the matter. In his Fusion interview, he said:

If it's somebody who I love who's in my life, I don't necessarily have to agree with their decisions or decisions they've made to continue to love them and participate in important events… Ultimately, how you treat a person that you care for and love is different from what your opinion is, or what your faith teaches marriage should be.

Not for Santorum, it seems. Here is a man who never shies away from controversial, conservative opinions — clinging to his views, even in the face of familial angst. In a 2012 CNN appearance, Santorum (a Roman Catholic) claimed that even if his daughter were raped, he would still oppose abortion. He grounded his pro-life stance in an interpretation of the constitution, insisting his was not a religiously motivated decision. “[L]ife begins at conception and persons are covered by the constitution,” he said, “and because human life is the same as a person, to me it was a pretty simple deduction to make that that's what the constitution clearly intended to protect."

He’s also pretty stellar on a topic that will in short order affect everyone globally (if it isn’t already — hey there, Kiribati!). Santorum has gone the liberal conspiracy route, referring to climate change as simply an idea fabricated off the back of the earth’s natural thermal alterations. During his 2008 campaign, he said:

To me this is an opportunity for the left to create – it’s really a beautifully concocted scheme because they know that the earth is gonna cool and warm. It’s been on a warming trend so they said, ‘Oh, let’s take advantage of that and say that we need the government to come in and regulate your life some more because it’s getting warmer.’

More recently, Santorum defended Indiana’s sharply criticized “religious freedom” law as “a good bill.” The law’s critics argued that the law would open the way for businesses to discriminate against gay customers, and have succeeded in having it amended. Santorum has previously likened consensual sexual contact between same-sex adults to child rape and dog fornication.

After the one-upmanship homophobia of the last Republican primary, perhaps we should be glad that so far Santorum is the only potential 2016 candidate who has so roundly condemned gay marriage in recent days. Although Rubio and Cruz are no LGBT campaigners (far from it), their comments are milder, and also safely refer back to the law. Rubio claimed that states and not courts should determine the legality of gay marriage, while Cruz prevaricated a little but ended up with the same answer:

This is a position even Democratic contender Hillary Clinton held until not too long ago. But gay marriage may not be a state-by-state issue for much longer. Later this month, the Supreme Court will decide whether or not to strike down marriage bans — essentially determining whether or not marriage equality is a constitutional right. At that time, one suspects, Santorum will be left very much in the cold.

More like this
What The UK Blocking Scotland’s Gender Recognition Bill Means
By Sam Ramsden
Gen Z Are Twice As Likely To Identify As Queer, According To New Data
By Sam Ramsden
The UK Government Is *Finally* Banning Conversion Therapy
By Sophie McEvoy
"Lavender Haze" Star Laith Ashley Breaks Down Filming With Taylor Swift
By Jake Viswanath
Get Even More From Bustle — Sign Up For The Newsletter
From hair trends to relationship advice, our daily newsletter has everything you need to sound like a person who’s on TikTok, even if you aren’t.