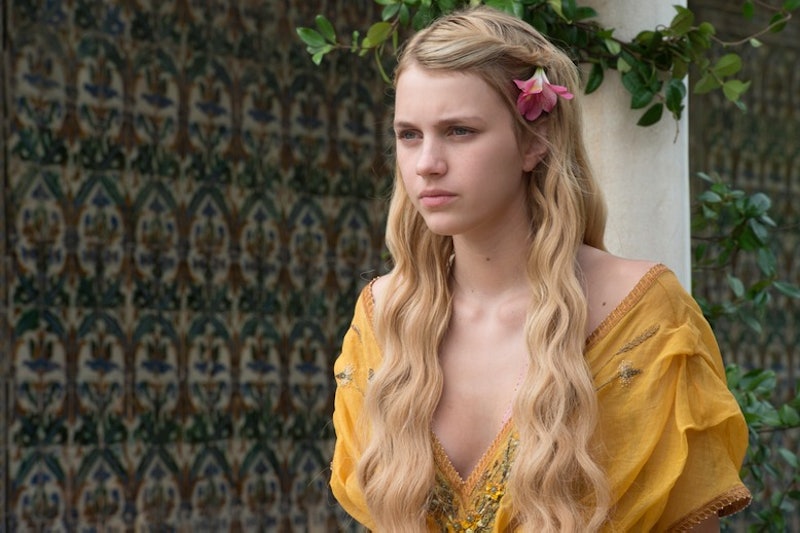 Season 5 may have only just begun, but that certainly hasn't stopped Game of Thrones from seeking to do the impossible: attempting to explain just why Cersei is as horrible as she is. And while some credit should certainly be given to her sassy nature (which was in just as rare form when she was a child), at least now we can understand the basis for all her insecurities and hostility. As we learned last week, a witch foretold Cersei's future, revealing that all three of her children will die throughout her lifetime. So while Tommen's future now remains on shaky ground, does this also indicate that Cersei's daughter Myrcella will die on GoT ?

We know that Joffrey has indeed already met that dark and foretold fate, but does that necessarily mean Cersei's two remaining offspring, Myrcella and Tommen, have an equally grim future in store? You would think that Myrcella in particular would be next in line to fulfilling that witch's prophecy, considering that she's currently living in Dorne with Prince Oberyn's family. (You know, the guy Cersei hired the Mountain to kill during Tyrion's trail by combat in Season 4.) In fact, the entire reason Myrcella was sent away in the first place was so that she could marry Oberyn's nephew (and Doran Martell’s son), Trystane, as a way to help broker peace with House Martell. (Though I think it's safe to say that alliance is severely shattered now.)

So what's to stop Oberyn's family from killing Myrcella as a form retaliation? (Those who seek to avoid BOOK SPOILERS should flee the kingdom, aka this page, at once!)

Believe it or not, Myrcella's life isn't in quite as much jeopardy as you would think. Mind you, that doesn't mean she won't still be used as a pawn of sorts and endure her fair share of suffering along the way. In the novel A Feast for Crows, Arianne Martell (the eldest daughter of Doran), begins scheming in an attempt to make Myrcella Queen of the Seven Kingdoms. You see, according to Dornish law, an elder sister wields the power to inherit the throne before her younger brother, meaning that Myrcella could potentially sit atop the Iron Throne instead of Tommen. An idea I'm not totally against considering it would allow Tommen to spend some much needed time with Ser Pounce.

Arianne figures this would be the perfect way to spark a war between Dorne and the Lannisters. However, during her attempt to take Myrcella away and set the wheels of her plan in motion, Doran's guards intercept their traveling party and results in Myrcella getting severely wounded in the crossfire. A knight by the name of Gerold Dayne tries (and fails) to kill her, but still manages to cut off her ear and leave her with a very serious facial scar, thus robbing her of her former beauty.

So yeah, it's certainly not the happiest future in the world (though on a show like this, were you expecting anything less?), but at least she's still in the land of the living. Well, for now at least. We know that the GoT showrunners, David Benioff and Dan Weiss, have promised that some people will die on the show who didn't in the books, so there's always a chance Myrcella will be one of those select few. But if the series remains true to her character's original storyline, then Cersei's daughter should be sticking around for quite some time. Or rather, at least until the end of this season.

Though, as this show has taught us time and time again — just because you're still alive, doesn't mean you won't be suffering in some form or another. And in regards to Cersei's children, they're all basically on a ticking clock, which means it's only a matter of time before it begins chiming their doom.