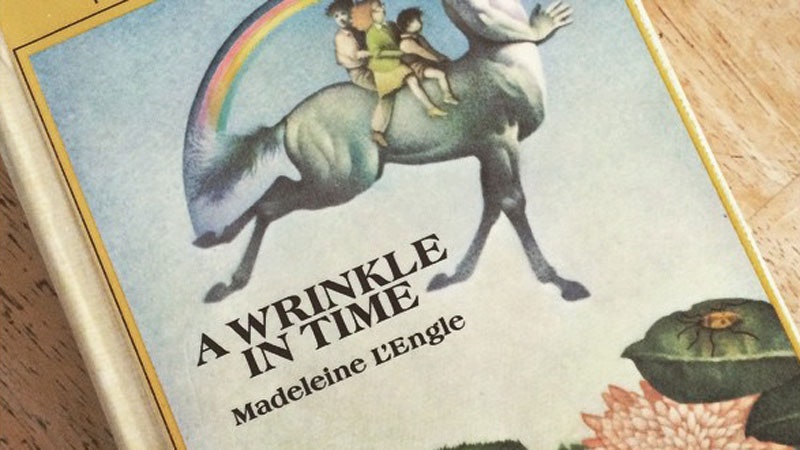 In exciting news for all of us Madeleine L'Engle fans, the Wall Street Journal has released three new pages of the original A Wrinkle in Time manuscript. The never-before-seen pages, which were cut before publication and recently rediscovered by L'Engle's granddaughter Charlotte Jones Voiklis, contain an in-depth discussion between protagonist Meg Murray and her father about the emergence of totalitarianism on Camazotz, the dystopian planet from which Mr. Murray has been rescued.

The pages are a fascinating read for several reasons, not the least of which is that it's always amazing to get a glimpse of unpublished material ( Charlie and the Chocolate Factory , anyone?), and to gain that extra little bit of insight into the mind and process of one of your favorite writers. What's also striking about the pages, as the WSJ article mentions, is that they are explicitly and specifically political. While L'Engle never shied away from tackling big, meaty topics in her work, she rarely used her fiction as a platform from which to preach her own political views.

In the pages, Mr. Murray proffers up a fairly long speech on how totalitarianism is a "logical outcome of too much prosperity. Or [...] the desire for too much security," and relates the circumstances on Camazotz to real-world political events of the mid-20th century. If you've been following the news for the last 15 years, such musings on the dangers of our "lust for security" might feel startlingly prescient, and this kind of incisive moral questioning about complex issues is a hallmark of L'Engle's work. So are the ideas about individualism vs. herd mentality, and that the willingness to struggle is indispensable to our humanity.

However, she's rarely this direct, and I don't think they're up to the usual L'Engle standards! Mr. Murray's words are highly explain-y, and are punctuated by several very leading questions from Meg. The scene winds up feeling very didactic, as though L'Engle is using her characters as mouthpieces instead of just letting them be. By contrast, her usual method is to present her fictional story and let us draw our own conclusions about how it relates to our reality. She's a great writer because she knows how to guide your attention without grabbing the sides of your skull, twisting your neck around, and holding your head firmly in place until you've seen what she wants.

So, while I'm grateful to have been given the opportunity learn a bit more about the inner workings of one of my literary heroes, reading an author's outtakes (let alone analyzing them as I just did — yikes!) is always a shaky, and maybe even slightly shady, proposition. I should hope no one ever judges a piece of my writing by an early draft — sometimes these big outtake reveals make me feel like I should set fire to my hard drive, so that no one will ever have access to all the crap that didn't make the cut if I ever publish anything big! Pages like these are usually scrapped for a reason: the author or the editor didn't feel that they belonged in the book. So, if they aren't perfect, that doesn't diminish L'Engle's art in the slightest. It just goes to show that she knew what is, and what is not, a great piece of writing.

More like this
I've Read The Harry Potter Books 30+ Times & This Plot Hole Haunts Me
By Kelsey Stiegman
10 Must-Read New Books Out This Week
By K.W. Colyard
The Most Anticipated Books Of August 2022
By K.W. Colyard
The Viral 'Little Miss' Franchise Is Focusing On Mental Health Next
By Darshita Goyal
Get Even More From Bustle — Sign Up For The Newsletter